My twenty-sixth new ground of 2019 was on Friday 19th April at Wildsmith Meadow in Newent, Gloucestershire. The match was Newent Town vs. Cheltenham Saracens in Hellenic League Division One West.

Wildsmith Meadow is in a rural setting some half a mile south-east from the edge of Newent itself. The ground is accessed via the B4215 road which runs down the western side of the venue as well as a couple of properties which back onto the ground. The club did have a pub as a neighbour to the south but this closed down in January 2019. To the east is a field which was used as an overspill car park due to the large crowd during my visit, as well as an electricity station. The northern end backs onto a small road with more fields beyond this. The venue is some 9 miles north-west of the nearest railway station at Gloucester so requires an additional bus service from this centre to reach it via public transport. 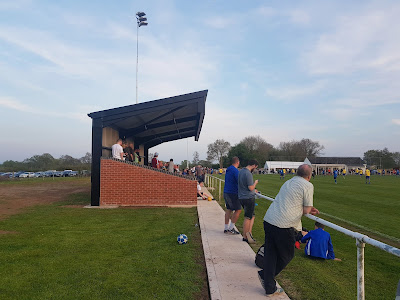 There is one stand at the venue which is to the north of the halfway on the eastern side of Wildsmith Meadow. This stand is a 5 level concrete terrace and the southern section of the stand has had dining chairs placed in it to give some unofficial seating. This is the most spacious side of the ground with the rest of this side being a strip of concrete standing with a large grass area behind. Should the club need to upgrade facilities further this would be the obvious place to do it. 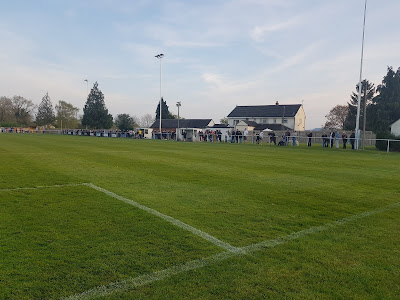 The western side is uncovered grass standing. This side is narrow at the southern end before widening up towards the northern end. The two dugouts are located here either side of the halfway line. The northern end is also uncovered grass standing, however this is sufficiently slim to be more of a walkway than a proper spectator end. There is fencing directly behind the goal which ends up being in front of the spectator area. The southern end has the club facilities with a clubhouse, featuring a bar, where the doors open out into a gazebo. In front of the clubhouse is a patio area with picnic benches. This end is similarly tight on space so unsurprising more fencing is deployed to prevent balls from hitting the clubhouse or spectators. 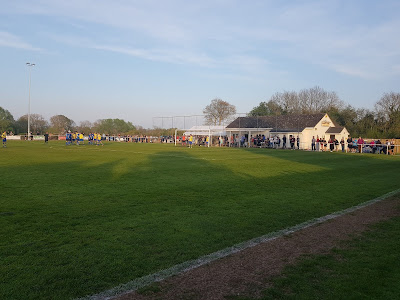 The visitors went into the game with a slim chance of promotion so were at least looking to keep their hopes alive a little longer against a Newent side in the bottom half of the table. The first half was an even affair with Newent having a chance in the 13th minute when a cross from the left reached the back post and was headed just wide. Their opponents went close three minutes later when a fizzing 20 yard shot just needed someone to get a foot on it to deflect it goalbound. However the ball remained undisturbed and went the wrong side of the post. In the 27th minute a good opportunity for Cheltenham went begging as a ball over the top found a striker who had to wait for the ball to come down and then rushed his finish volleying wide of the mark from 12 yards. In the 34th minute it was the turn of the hosts to create something as a free-kick was whipped in from an acute angle and would have snuck in the goal had the visiting goalie not backpeddled and tipped over. The sole goal of the game came ten minutes after the break. A defensive error from the home side resulted in the ball being played to a Cheltenham attacker and he was only denied by a great double save by home shotstopper Alex Goode. However this was at the expense of a corner and from that Matt Barnard headed in for Cheltenham. The away side edged the rest of the game and Goode had to be alert again with 14 minutes left to go as he did well to get down and save a low shot from close range. 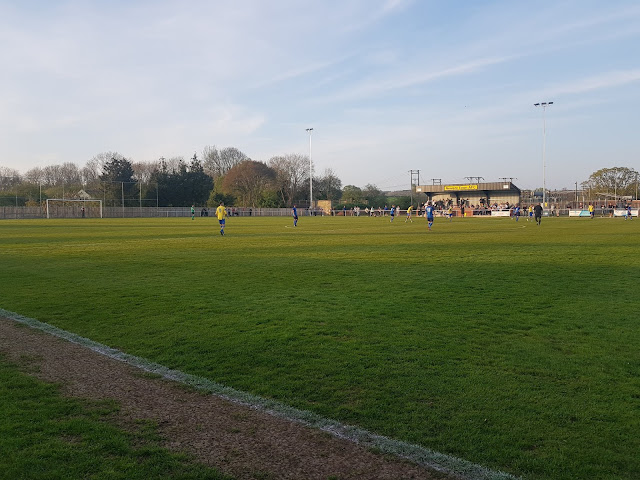