My third new ground of 2020 was on Saturday 29th February at Borough Park in Workington, Cumbria. The game was Workington vs. Clitheroe in Northern Premier League Division One North West.

Borough Park is on the banks of the River Derwent half a mile north of the town centre. The river borders the northern side of the ground with the eastern side backing onto a park and the southern side closest to a council building across the road. To the west is a supermarket with the town's rugby league stadium beyond this. The venue is just under half a mile north of Workington railway station and has been home to the club since 1937 when the club moved a short distance from the aforementioned Lonsdale Park. 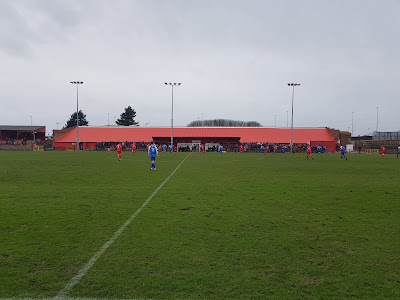 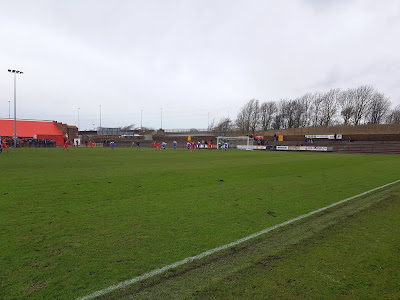 At the end of the north-east quadrant is the eastern side of the ground which houses the main stand. Most of the structures were built around the time of the club's election to the Football League in the 1950s so are now showing their age. The main stand contains around 500 seats spread across five rows and a flat concrete section at the back of the stand. The roof is held up by nine support beams at the front of the stand. There are large uncovered concrete terraced sections either side of the stand and a few rows of terracing directly in front of it. The southern end has another large concrete terrace which extends to the south-west quadrant. This terrace consists of ten levels with the back half covered and the front half uncovered. 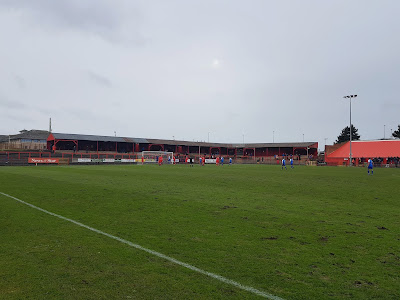 Workington were looking to strengthen their position at the top of the table against a Clitheroe side in the bottom reaches of the top 10. The hosts had a great chance to open the scoring in the 13th minute when Cerian Casson was tripped in the area while heading away from goal. Scott Allison sent the keeper the wrong way from the spot to put his side 1-0. Just six minutes later Workington went 2-0 up - the ball was zipped across the area by Dav Symington for Brad Carroll to drill low into the far corner from 12 yards. A minute before the half-hour mark the home side had a header cleared off the line but they did manage to notch up a third goal of the half in the 35th minute. A low cross into the box reached Allison who undertook some neat footwork to side-step a defender and smash into the roof of the net. This truly was a dominant first-half display significantly aided by a very strong wind towards the away goal. The home scoring was rounded off two minutes before the interval as Dav Symington knocked the ball across the area where Scott Allison steered home to round off his hattrick. With the wind against the league leaders in the second half the remaining 45 minutes were a much more even affair but Workington knew the game was already won. Clitheroe were able to pull one back in the 67th minute through a great 20 yard strike into the top corner by Tyrhys Dolan but there was never any danger of a comeback as the hosts played out a comfortable victory. 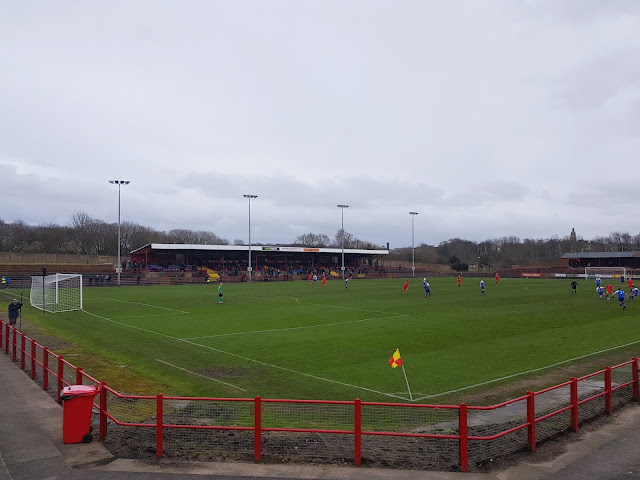