My sixth new ground of 2019 was on Saturday 9th February at Bodieve Park in Wadebridge, Cornwall. The match was Wadebridge Town vs. Bude Town in South West Peninsula League Division One West.

Bodieve Park lies on the northern outskirts of Wadebridge with the site having fields followed by the A39 to the north. To the west is a secondary school and leisure centre with a hotel and industrial site to the east. The south is bordered by a road with an industrial estate beyond this. The town's railway station closed in the 1960s so the nearest one today is Bodmin Parkway some 11 miles south-east of Wadebridge. The venue has been home to the club since 1949. 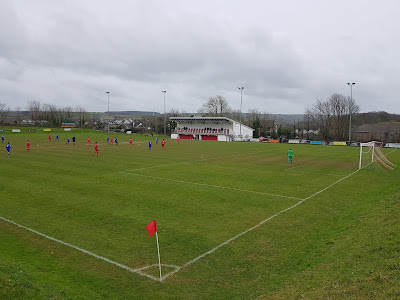 Bodieve Park slopes markedly downhill from east to west. On the eastern side the grass bank is staggered into three sections. It is sufficiently steep that the top of the bank allows spectators to get a near-perfect view of the pitch from their cars. On my visit this is what a significant proportion of attendees were doing. Behind this is an additional grass area as large as the pitch itself which is used for training and warm-up sessions. The middle of the bank consists of an area of uncovered standing - this is mostly on grass though there is a section of hard standing towards the northern end. There are two dugouts built in this area as well. A staircase then leads down to the pitch at the bottom of the bank. 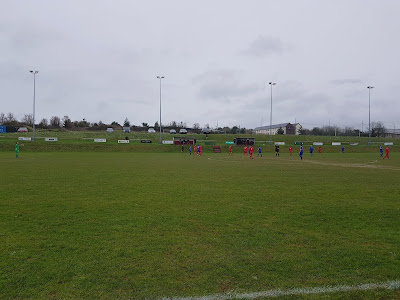 The western side of the pitch has an all-seater stand by the halfway line. This stand has 109 seats across 3 rows and the seating area is elevated above the pitch with the dressing rooms contained in the interior underneath. The area running from this stand to the northern end of the field is uncovered hard standing while the area running from this stand to the southern end of the field us uncovered grass standing. The other stand at the complex is the Ron Williams Stand behind the northern goal. This covered stand has one row of seating for most of its length with a standing area in the eastern end of the stand. There were initially 48 seats in this stand but a handful of these have fallen by the wayside since they were installed with only the backrest still in place. There is a strip of hard standing all the way along this side with an area of grass and gravel in the north-east corner just beyond the stand. The north-west corner has a clubhouse with a smart bar area. With this sitting at the bottom of the gradient you cannot see any of the game from here but it provides a nice place to be during half-time. The southern end is a simple affair with uncovered grass standing only. 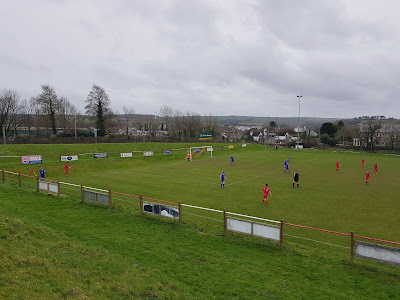 With the two sides at opposite ends of the table it was little surprise to see Wadebridge race into a commanding lead before the 20 minute mark had even been passed. Their first goal came in the 5th minute when Keiran Rowe drilled the ball low into the bottom corner from six yards. In the 13th minute the second goal arrived as the ball was sent through to Kyle Flew on the right side of the pitch and in on goal he smashed into the bottom corner from 15 yards. In the 20th minute the home side went 3-0 up when Kyle Flew picked up the ball and under no pressure played in Dan Jennings who smashed the ball into the roof of the net from the left side of goal. The Bude defence was all over the place and were very lucky not to concede a fourth in the 23rd minute when a Dan Carne effort was fumbled by the Bude keeper and Dan Jennings smashed the rebound over an open goal from six yards. Recognising a change had to be made Bude made a defensive substitution and this had the desired effect of stemming the tide. The visitors even managed forays into the opposition half to create a few half-chances as they rode out the rest of the half without conceding again. After the break Bude continued to improve and went close in the 55th minute as they hit the post from the edge of the area after lackadaisical defending from the home side. A couple of minutes later they did manage to net after a penalty was awarded for a trip in the box. Harry Hopcroft was on penalty duties and his excellent spot-kick into the corner of the net was well out of the reach of Wadebridge keeper Jim Vernon. The home keeper did prove his worth in the 61st minute though as he produced a great stretching save to stop a shot from the edge of the area finding the back of the net. This proved crucial as rather than seeing their lead cut to one Wadebridge ended up extending it to three just a minute later. A really nice sequence of pass and move football culminated in Sam Gerken poking a shot into the bottom corner from 20 yards. Bude were matching their opponents in attacking endeavour and almost had a second when a shot at the back post was saved by Jim Vernon at point blank range. However, the visitors were proving their own worst enemy defensively and straight after this an appalling back pass went straight to Dan Jennings who rounded the keeper only to roll the ball onto the outside of the post. The let-off was Bude was brief though as Wadebridge grabbed two more goals in the space of three minutes. First Sam Gerken grabbed a second in the 74th minute and then in the 76th minute Wadebridge overran the away area - Kyle Flew's effort was saved but Dan Jennings was there to smash in a rebound from a couple of yards out. Jennings then went close to notching up a hatrick in the 86th minute when he nipped in front of a defender at the near post to poke a cross just wide of the goal. There was time for one more goal and this came from the boot of Ben Joyce who curled a 25 yard free-kick towards the top corner with the away keeper only managing to palm the ball into the side of the net. 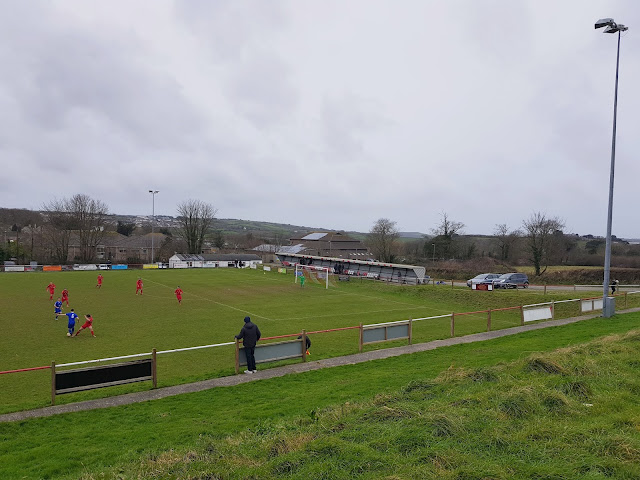