My fifty-first new ground of 2011 was on Saturday 27th August at Kenilworth Road in Luton, Bedfordshire. The match was Luton Town vs. Braintree Town in Conference National.

Kenilworth Road is just under 1 mile from Luton railway station and fits in tightly in amongst rows of houses. It has been home to Luton Town since 1905. 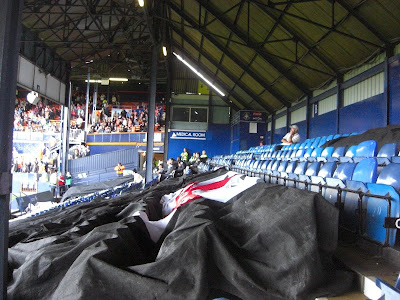 Kenilworth Road hosted league football up until 2009 when Luton were relegated to Conference National and so is one of the larger stadia in the division. There are five separate stands with the Main Stand running alongside the pitch on the south-west side of the ground being the largest of these. It has a capacity of around 4,300 but because of a main road begins to narrow inwards at around half-distance. Attached to this on the same side of the ground is the David Preece Stand, a small stand that can hold 700 fans which sits in between the Main Stand and the adjacent Kenilworth Road Stand on the south-east side of the venue. The Kenilworth Road Stand sits behind the goal and has a capacity of 3,200. 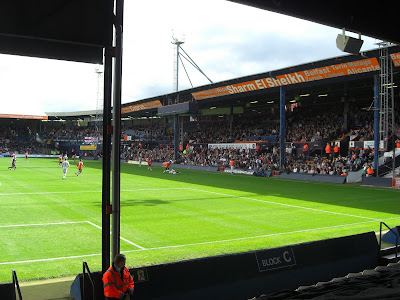 Running alongside the pitch on the north-east side of the stadium is a short row of executive boxes with 200 seats in front of them. This was where the Bobbers Stand stood until the seats were removed and replaced with the boxes in 1986. The north-west side of the ground has the Oak Road End, a 1,800 seat structure behind the goal. To access this stand you have to go through an entrance built into a row of houses behind the stand. The cramped nature of the structure means the legroom in between seats is rather inadequate. The Oak Road End is set aside for away fans and is where I watched the game from. 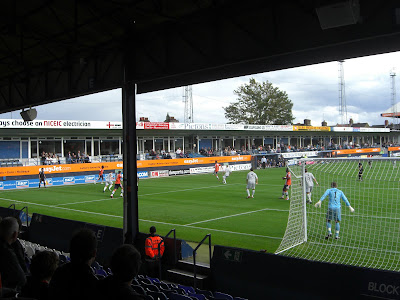 The game was a fairly comfortable victory for Luton who opened the scoring on 10 minutes when they opened up the Braintree defence and a good, low finish across the goal put them 1-0 up. The away side equalised after 20 minutes when they bundled in a cross from close range. The game was decided during just before the break when the hosts grabbed two quick goals. Luton were awarded a penalty after the Braintree keeper brought down one of their forwards. The penalty was saved but the rebound was tucked home. A couple of minutes later Luton snuck behind the visitors back line and shot across the goal to make the score 3-1 at half-time. The result rarely looked in doubt in the second period and the game finished 3-1 to the home side. 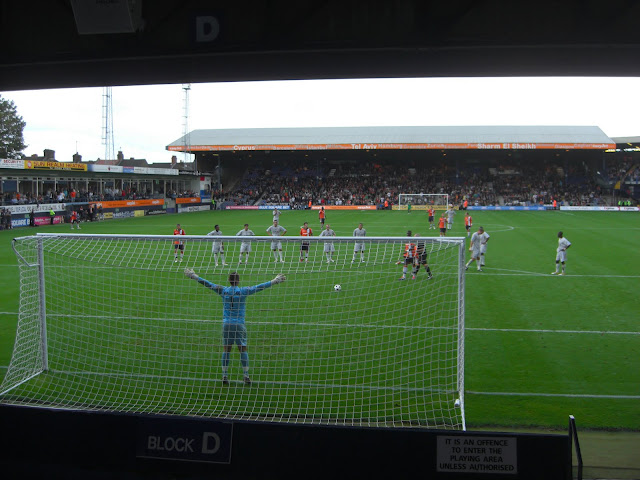