My eighteenth ground of 2017 was on Saturday 5th August at St George's Park in Newport, Isle of Wight. The match was Newport (IoW) vs. Guildford City in the F.A. Cup Extra Preliminary Round.

St George's Park is on the south-eastern outskirts of Newport - while the town is not close to any railway stations there are regular bus services connecting it to the ferry ports at Ryde and Cowes. Until recently the ground was mostly surrounded by fields and wooded areas. However construction of a retail park bordering the ground is ongoing and the club have been given notice to vacate the site in the summer of 2018. The venue has been home to the club since 1888 so this will see the end of a 130-year stay. 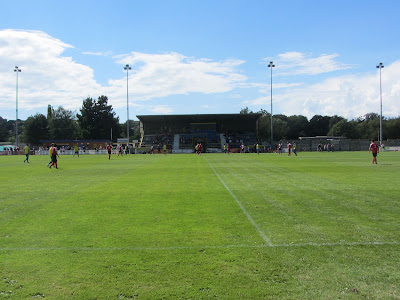 The main stand is on the west side of the ground. This structure has 300 seats with supporters assigned the left and right thirds of the stand. The middle section is given over to officials and is also split by the players tunnel which leads back to dressing rooms. The interior of the stand also includes the main facilities and a directors box and boardroom at the top of it which look out onto the pitch. The two dugouts which drop below pitch level are in front of the stand. There is one additional building on the western side which houses a snack bar and toilets and there is a flat concrete viewing area in front of this. Other than this the rest of this side is uncovered standing. 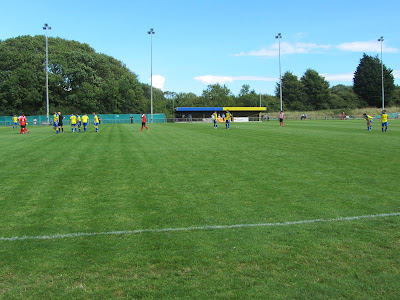 The remainder of the ground is hard standing with a strip of concrete behind the barrier and decent grass sized areas behind this. Each of the three sides also have one covered area with the eastern one by the half-way line and the northern and southern ones directly behind the goals. The eastern and southern sections have one raised level with a large flat concrete section with the northern end having two raised levels of concrete. 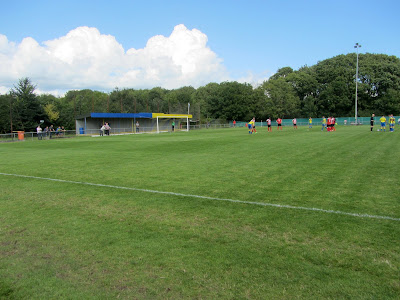 The game was between Wessex League Premier Division side Newport (IoW) and Combined Counties League Premier Division side Guildford City. Guildford started well creating a couple of decent chances in first couple of minutes. Newport were on the back foot in the opening part of the match but had their first half-chance in the 23rd minute when Jake Ballentyne fizzed a low shot from 30 yards out requiring visiting keeper Luke Badiali to get down quickly to palm the ball to safety. In the 39th minute the hosts took the lead - it came about when the visiting right-back went down injured which left a gap for Charlie Urry to race into. Urry was then able to beat the last defender and goalkeeper in one move and roll into an empty net from 12 yards out. Guildford very nearly equalised in first-half injury time after a header from a corner was saved on the goalline by Newport shotstopper Gary Streeter. The away side started the second half well and went close again in the 48th minute after Louie Downey's weak shot squirmed through keeper Gary Streeter's legs. Fortunately for Streeter there was a covering defender in the shape of Will Quigley who cleared off the line. Newport's respite didn't last long though as four minutes later Guildford did get back on level terms - a corner was whipped into the home area and bounced up kindly for Kieran Campbell who smashed home from 12 yards. The Combined Counties League side continued to attack and in the 68th minute Gary Streeter had to be on good form to produce a double save to deny Campbell his second and then Downie on the rebound. The next goal surprisingly came from Newport - after going after the home goal the hosts were able to break on the counter. An initial shot in the area was cleared off the line but as Charlie Urry went for the rebound he was clattered into. The referee pointed to the spot and Aiden Sainsbury shot low sending keeper the wrong way. Newport's hopes of advancing to the next round took a hit in the 81st minute when City drew level for the second time of the day. One of the away midfielders did well in the middle of the park before threading the ball through to Kyen Nicholas who poked past the advancing Streeter. Both sides were keen to avoid a weeknight replay on the mainland so went for it in the final minutes trying to snatch a winner. However neither side could grab the crucial fifth goal meaning they would have to do it all over again. 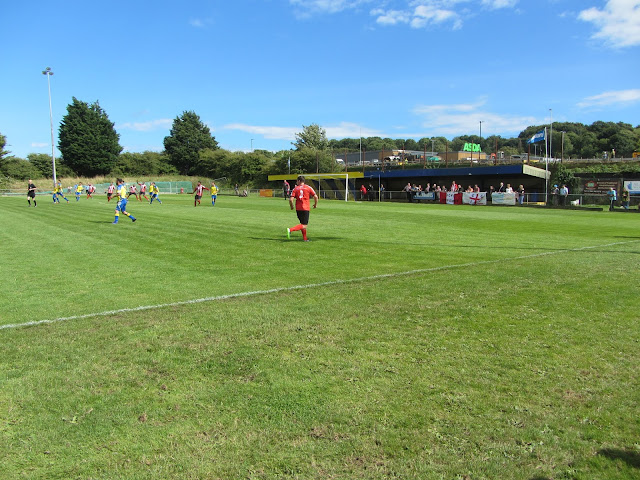