My fifth-first new ground of 2019 was on Saturday 5th October at Weymouth Street in Warminster, Wiltshire. The match was Warminster Town vs. Bristol Telephones in Western League Division One. 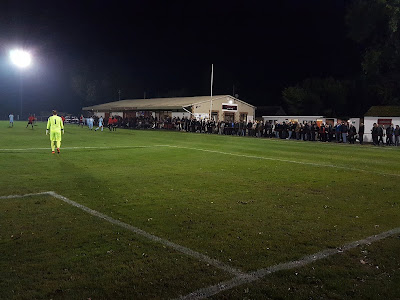 The south-west is the main side of the ground. The entrance is in the western corner and this leads to an uncovered concrete standing area with a couple of club buildings including a food outlet. Taking up the middle third of this side is a decent sized clubhouse which opens up to a viewing area for 52 seats which are all covered with the roof extending out to the edge of the pitch. 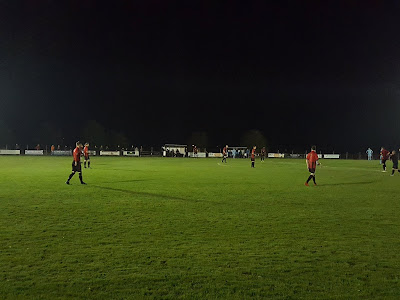 The north-eastern flank has the two dugouts and a strip of hard standing with grass behind for the northern half. The southern half beyond the dugouts is not available for spectators.The north-western end is uncovered hard standing though there is a small covered wooden stand with 10 seats in the northern corner. There is netting behind the goal due to the adjacent road and this is repeated at the south-eastern end to prevent balls ending up in neighbouring properties. This end has no additional stands though and is just uncovered standing. 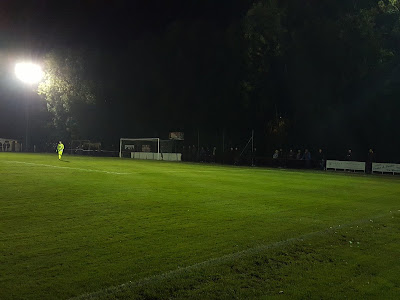 Visitors Bristol Telephones were rock bottom going into the game with just a single point from their opening seven games. However from the performance they put in on the night you wouldn't have known it. Their first opportunity came in the 6th minute when a great ball by Dhani Golding put Alex O'Neil through on goal. However O'Neil shot straight at home keeper Nathan Ball who saved comfortably. Bristol's finishing was more clinical after a quarter of an hour as a ball across to the left side of the area found Luke Banfield who drilled a good shot into the bottom corner from 15 yards. A couple of minutes later the away side almost extended their lead - the ball was fizzed across the box and Dhani Golding just missed poking it home from a few yards out. The chances continued to come and in the 28th minute Alex O'Neil's chip was barely tipped over by Nathan Ball. From the resulting corner a Warminster defender sliced wildly across his own goal and was very lucky not to see it sitting in the back of the net. It was all Bristol for the opening half-hour but three minutes later they found themselves 2-1 down after a quick-fire double from Warminster. The first came from some great individual skill when Jacky Miluk picked up the ball 35 yards from goal, performed a brilliant dragback to lose two defenders and then slotted the ball into the bottom corner from 15 yards. Just over a minute later a Warminster through ball found James Vincent in on goal and he rounded the keeper and stroked the ball into the open net. This ensured the hosts led at half-time but during injury time before the break they were reduced to ten men when Francois Allen lashed out after a bad tackle and was dismissed. Bristol wasted little time asserting their numerical advantage and equalised just two minutes after the restart - the ball was passed to Alex O'Neil on the left and his shot across goal was tapped in at the back post by Dhani Golding. In the 54th minute the visitors were denied by the woodwork as Kieron Golding's fierce drive came back off the post. Three minutes later though the turnaround was complete with a stroke of luck - Luke Banfield whipped a cross into the area from 30 yards out and it ended up flying over the keeper and into the far corner. The lead could have been extended in the 74th minute as O'Neil cracked a great 25-yard effort off the underside of the crossbar. However the game could have swung the other way five minutes later when Warminster hit the bar through Ashton Shanley's free-kick. An equaliser for Warminster would have been cruel on Bristol Telephones though who richly deserved their first three points of the season. 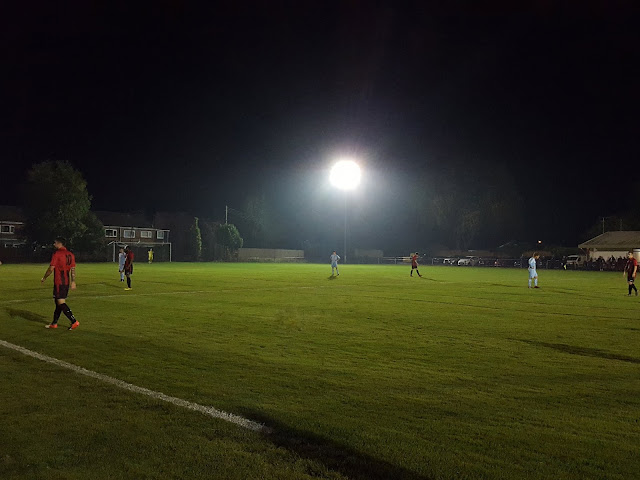