My thirtieth new ground of 2017 was on Saturday 28th October at the Withdean Stadium in Brighton, East Sussex. The match was AFC Varndeanians vs. Seaford Town in Southern Combination League Division One.

Withdean Stadium is part of the Withdean Sports Complex in the north of Brighton. Built in 1936 the ground is three-quarters of a mile north of the nearest railway station at Preston Park. The ground is bordered by the rest of the sports complex to the north, has a wooded area to its south and east and housing to the west. It was the home of Brighton & Hove Albion between 1999 and 2011 before they moved to their new home at Falmer. AFC Varndeanians have been playing at the Withdean since 2015. 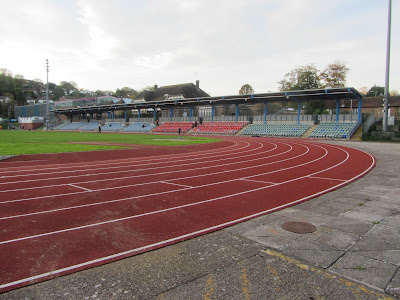 The North Stand runs from the six-yard box at the western end of the pitch to just past eastern end of the pitch with the furthest sections slightly behind the goal. This is the only permanent stand at the site and has a capacity of 1,350. The seating varies between five and seven rows and at the back there is a flat concrete space allowing for some media tables and a commentary box building. This side borders a pub and the leisure centre which can be accessed via the stadium. The bulk of the temporary seating used by Brighton & Hove Albion was removed when they left the stadium with only one uncovered temporary stand remaining behind the western goal with around 800 seats. With the venue being an athletics track this stand is quite some distance from the pitch and in between it and the goal has shotput netting and a storage box. There is a flat section behind allowing for more athletics facilities including the athletics club building, dressing rooms and a Varndeanians clubhouse which all sit in the north-west corner. 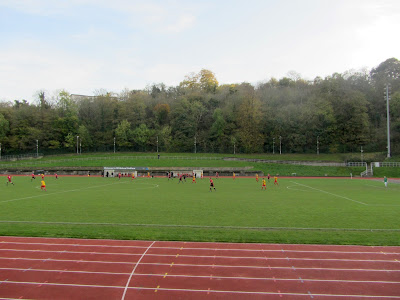 The southern section has the two dugouts placed next to the pitch. Behind these is the running track and then a flat area with a mixture of grass and concrete. Beyond this it starts to get steeper with a grass bank punctuated by a concrete walkway running through the middle of it. This side of the ground used to see the largest stand in the venue - the South Stand. This uncovered temporary structure was able to house around 4,700 supporters. The eastern end of the Withdean is another area which used to have additional seating. There were two uncovered temporary stands which made use of a portion of the car park to bring the venue's capacity up to 8,850 when the Seagulls departed. With these since removed there are no spectator areas with the running track running close to the boundary with the fully restored car park. 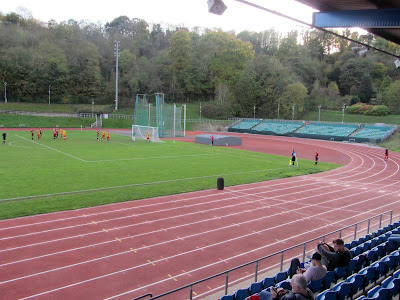 Varndeanians entered the game having lost their last seven league fixtures but despite this were much the better side early on. They took the lead in the 17th minute through Ryan Walton after work from James Walters down the left wing. Walters had picked up the ball in the final third and after advancing into the area shot at the keeper, the ball was palmed away but then found its way to Walton to knock in from close range. A couple of minutes after this the lead was doubled. This time Walton turned provider whipping in a free-kick from the left with Elliott Wood rising unchallenged to head home. The quick-fire double woke Seaford up and they went close a couple of times around the half-hour mark. In the 42nd minute they should have grabbed a goal back when an attacker went clean through but he blazed wide with just the goalie for company. The visitors improved in the first section of the second half but their shooting again let them down. After an even half an hour the away side suffered a disastrous six minute collapse where they conceded three more goals. The first of these came in the 77th minute when an attack was cleared as far as James Walters some 30 yards out. Walters let rip with a volley which flew past the keeper into the back of the net. In the 81st minute Varndeanians won a corner on the left and it was crossed to the backpost for Connor Martin to nod in from close range. Two minutes after Seaford let in a near-identical goal when a corner from the right went to the backpost and Connor Martin headed in once again. The hosts were reduced to ten men in the 87th minute when Ryan Walton picked up two bookings in the space of a minute - the first for a dive in the area and the second for a push trying to beat a defender and the keeper to the ball and score from another cross to the backpost. Thankfully for Seaford this stemmed the tide and ensured the score was kept at 5-0 - a scoreline few would have predicted at the start of the afternoon. 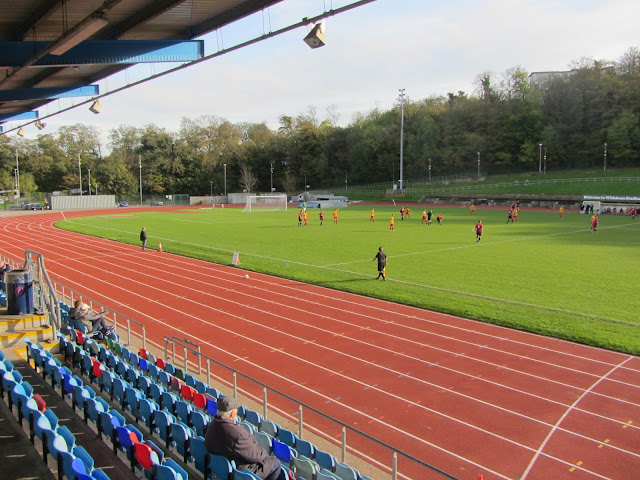