My second new ground of 2020 was on Saturday 22nd February at Moor Lane in Salford, Greater Manchester. The game was Salford City vs. Colchester United in Football League Two.

Moor Lane is in a broadly residential area 2.5 miles north of Manchester city centre. The stadium is directly opposite Kersal Moor Nature Reserve to the north while backing onto housing to the west and south and a primary school to the east. The ground is 2 miles south-east of the nearest railway station at Clifton but only a half a mile further to the south is the better served Manchester Victoria station. The venue has been home to Salford City since 1978. 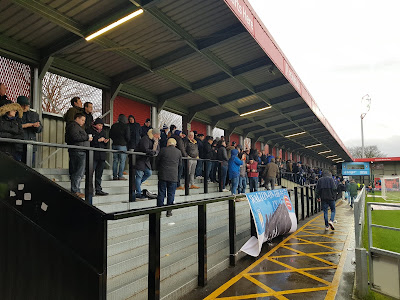 Moor Lane has been completely revamped to accommodate Salford's rapid rise through the football pyramid since its takeover. The original stadium had a capacity of just 1,600 which while adequate for 8th tier levels was not sufficient for the ambition of the new owners so during 2017 the ground was completely rebuilt to Football League standards. The revised capacity is 5,108 with 2,246 seats - the site is tightly packed in so there is little room for further expansion should the club's rise up the leagues continue so as a result a new home would be required in those circumstances. 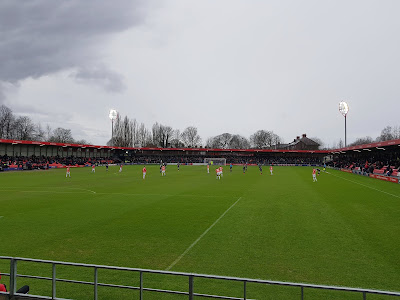 The fully enclosed venue has all four stands at the same height though the North Stand could probably be considered the main stand. This all-seater stand has six rows of seating with hospitality boxes along the back of the middle half of the stand and has the club reception and other facilities. The eastern section of the stand is given over to away supporters who wish to sit rather than stand. The South Stand also has six rows of seating for its length but nothing at the back of the stand save a TV gantry in the middle. The two ends are both 12 level metal terraces with the western end given over to the nosiest home support and the eastern end to away supporters. The latter is easily able to be split into sections depending on the level of away support. 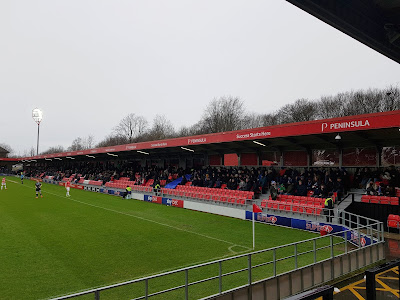 Colchester went into the game in need of a win after back-to-back defeats had seen them slip out of the play-off places. Salford meanwhile were safe in mid-table with a slim chance of getting to the post-season should they have a spectacular end to the season. The terrible weather conditions meant a classic was never on the cards though the hosts started brightly with James Wilson going close with a 20-yard effort in the 3rd minute. Salford had a series of half chances until Colchester took the lead in the 27th minute. Kwame Poku received the ball just inside his own half and set off on a run - he beat two defenders before curling a shot into the bottom corner from the edge of the area for an excellent opening goal of the game. Barely two minutes later history almost repeated itself as Poku curled a shot from almost the same area of the pitch inches wide of the goal and Colchester were very much in the ascendancy. Salford went close to restoring parity in the 39th minute when Craig Conway's lofted free-kick was headed on by Jack Baldwin to find James Wilson six yards out in plenty of space. Wilson shot towards goal but Dean Gerken stuck out a leg and kept the score at 1-0. This was a key moment as two minutes later the visitors extended their lead. Cohen Bramall did well down the left and then slipped the ball inside to Callum Harriott. The attacker took a speculative effort from 25 yards which bounced awkwardly in front of the keeper and ended up nestled in the far corner. Just when the U's were expecting to go into the break with a healthy lead they were pegged back as Salford scored themselves. A good ball down the right hand side got Michael O'Connor to the byline and he squared for Ashley Hunter who knocked into the net from six yards out. After the restart the home side went close as Scott Wiseman got in down the right and pulled back for Brandon Thomas-Asante at the back post. Fortunately for the away side Omar Sowunmi was there to nip in ahead and deny what would have been a certain equaliser. The second half was a poor spectacle and after the next close action was in the 82nd minute when Darron Gibson's bobbled shot from distance went the wrong side of the post for him. The final minutes were played out in torrential rain and high wind with the ball getting stuck on the sodden pitch. Eleven minutes of injury time were played and in the penultimate one of these Salford missed a glorious chance to grab a point as Thomas-Asante headed over Wiseman's cross from close range. The final whistle went shortly after as Colchester secured their first away win since Boxing Day. 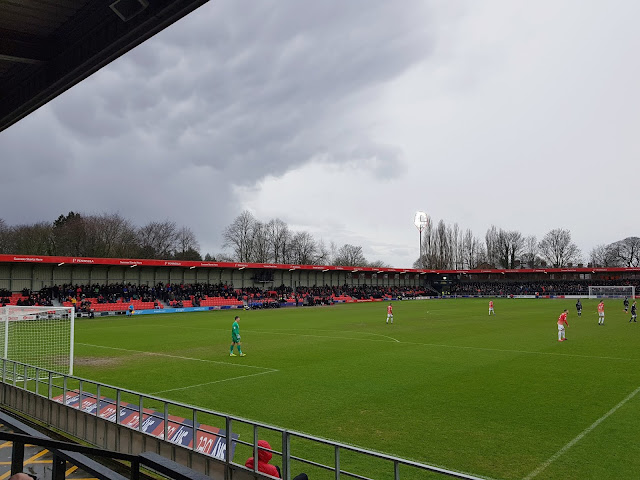