The original Wembley Stadium was located in Wembley Park in north-west London. Built in 1923, it was the home of the England football team for most of that period as well as hosting every F.A. Cup final from the year it opened until the stadium was closed in 2000 to make way for the new Wembley Stadium.

I visited the original Wembley Stadium on three occasions. The first of these was on 20th April 1997 for the Football League Trophy Final (at the time known as the Auto Windscreens Shield Final) between Carlisle United and Colchester United, which culminated in a penalty shoot-out win for Carlisle after a goalless 120 minutes. The other two visits were for international games, seeing England draw 0-0 with Saudi Arabia in a friendly match on 23rd May 1998 and England beat Luxembourg 6-0 in a European Championship Qualifying match on 4th September 1999. The photograph in this post comes from the Football League Trophy Final game. 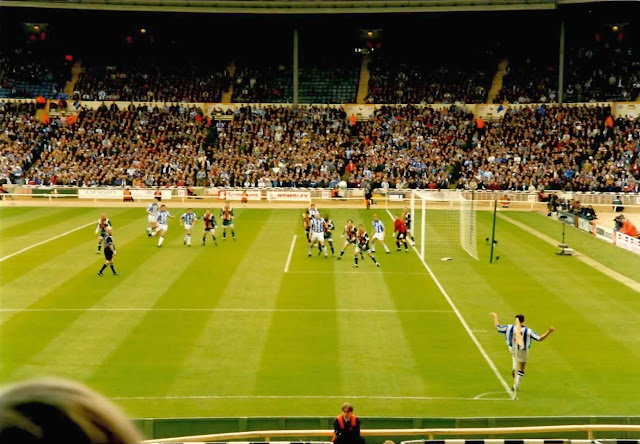 The oval-shaped stadium had a capacity of 82,000 when it was closed in 2000. The venue was finally demolished in 2003 and a new 90,000 Wembley Stadium was built in its place over the next four years, opening its doors in 2007, taking over the mantle as the home of the England team and F.A. Cup Final as well as various other events.
Posted by Jon Hayes at 17:14