My twenty-second new ground of 2018 was on Wednesday 19th September at Bickland Park in Falmouth, Cornwall. The match was Falmouth Town vs. St Austell in the South West Peninsula League Premier Division.

Bickland Park is on the western edge of Falmouth a couple of miles from the town centre. The ground is currently bordered by housing to the north and east but there is a new estate currently being constructed to the west as well. The nearest railway station is Penmere which is a mile south-east of Bickland Park. The venue has been home to the club since 1957 though they are looking to move to a new location in the near future. 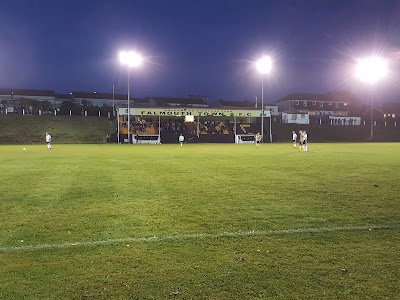 The ground is a classic non-league venue with a dramatic slope from north to south. The northern side of the ground is dominated by the main stand halfway along the pitch length. This structure consists of seven rows of concrete with wooden benching atop each level and can hold around 350 spectators. The stand is an old one and several supporting beams hold up the corrugated iron roof which does result in restricted views in sections of the stand. However the natural slope, and the fact the stand is raised above ground level to allow space for dugouts underneath, does mean the views are good on the whole. Unusually there is a staircase in the middle of the stand leading from the dressing rooms to the pitch resulting in the players having to go through the spectator area to the field of play. The back of the stand runs to the top of the steep grass bank so there are further uncovered viewing areas either side of the top of the stand. 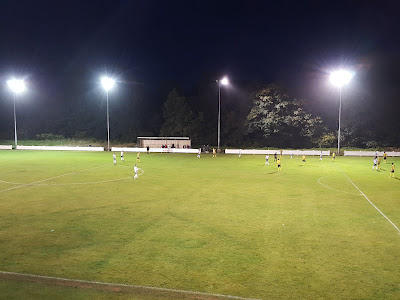 The southern side of the ground has a small covered stand by the halfway line but is otherwise uncovered. The whole side is made up of three levels of shallow concrete terracing but due to the overgrown nature of this side it is barely visible under the grass. The eastern end of the ground is a similar story with a small covered stand in the middle of this side directly behind the goal. With the stand barely taller than the goal itself netting has been placed it to keep shots over the bar within the confines of the arena. The western end of Bickland Park has a steep concrete slope down the hill with grass sections at the northern and southern edges. The concrete part of the standing areas is rather higgledy-piggledy as it varies between large stepped sections, small stepped sections and flatter sections. It is mostly uncovered but there is one covered segment behind the goal. The entrance to the arena is on this side of the ground and the north-west corner has a somewhat dated looking but spacious social club which is a good size for functions. This building is outside the confines of the ground save for a food outlet facing towards the pitch by the entrance. 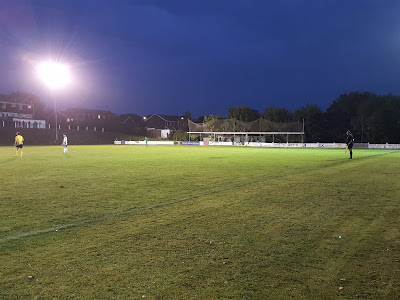 Falmouth raced out of the blocks and were 2-0 up within just six minutes. Martyn Duff grabbed the first goal before a ball was clipped into the box from the right for Tim Nixon to shot low into the far corner and put Falmouth into a two-goal lead. St Austell knew it was a long way back from here but came into the contest mid-way through the half. They went close in the 22nd minute when a ball was fizzed across the box from the right with an attacker just arriving too late to nod home. Only three minutes after the visitors did have the ball in the back of the net after Mark Goldsworthy prodded the ball over the line during a penalty area scramble. Falmouth should have restored their two-goal cushion in the 41st minute when a ball over the top saw an attacker beat the visiting keeper to the ball but he was off balance and his weak shot towards the empty net was intercepted by a defender. The second half was an end-to-end contest with lots of half chances. Neither side managed to carve out a really good opportunity save an occasion in the 68th minute when a well-time ball put Falmouth's Jordan Annear clean through with him being denied by the St Austell goalie. The last ten minutes saw a frenetic end to the contest. In the 82nd minute a cross from the right wing into the Falmouth box found an unmarked Liam Eddy who headed home from six yards to restore parity. St Austell were level for barely a minute though as a lofted Falmouth ball over to the right edge of the penalty area found Jordan Annear who unleashed a great half-volley across goal into the far corner of the net. A couple of minutes later and the hosts scored again to make it 4-2. This time it was a ball into the area from the left that was met by a header towards goal. The keeper saved well and then produced an outstanding save from the subsequent rebound but this second save only pushed the ball as far as Jack Bowyer was slammed the ball into the back of the net from close range to round off what had been a thoroughly enjoyable game for the neutral. 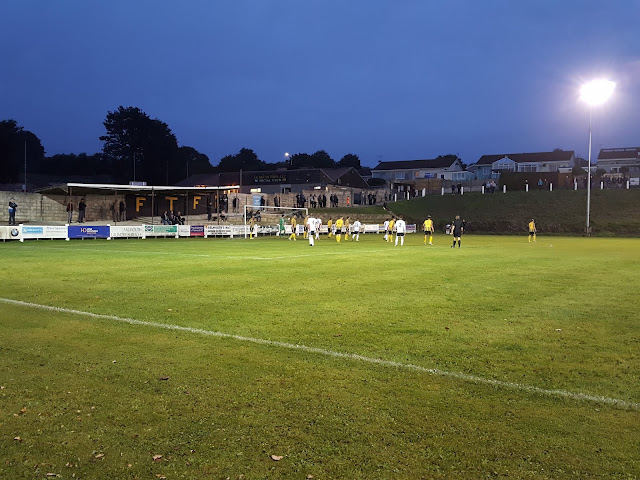