Date: 18th April 2022
Ground: Allianz Stadion
Location: Penzing, Vienna, Austria
My seventh new ground of 2022 was on Monday 18th April at Allianz Stadion in Penzing, Vienna, Austria. The game was Rapid Wien II vs. Vorwärts Steyr in the Austrian 2. Liga.
Allianz Stadion is located in the Penzing area in the western outskirts of the city. The ground is nestled in amongst the International Football Academy with additional pitches to the north and west. The eastern side has neighbouring apartments whilst across the road to the south is a supermarket and a pub. The Hütteldorf metro and railway station is located just behind these with links to the U4 Metro Line and local and national rail services. The venue was built in 2016 in the place of the old Gerhard Hanappi Stadium which the club played in between 1977-2014 when it was demolished. 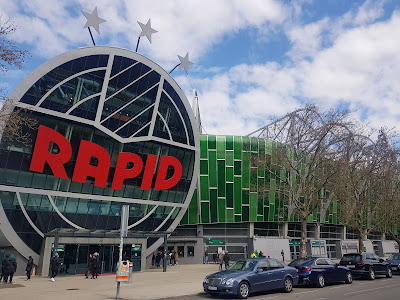 The 28,000 capacity ground is a fairly standard modern design with a bowl set-up - there is uniformity in size with the exception of the West Stand which has a slightly higher roof. This stand is the only one split into separate tiers with three levels of hospitality boxes with seating in front which extends the length of the stand. The bottom two-thirds of the stand has additional boxes as well as the designated media section in amongst regular seating. The player entrance and dugouts are at the bottom of the stand underneath the seating. This stand has an unusual looking tube-like structure built into it which gives the design a bit of interesting variety. This tube links into the main stand but also has sightlines over an adjacent full-size pitch on the other side of the ground. 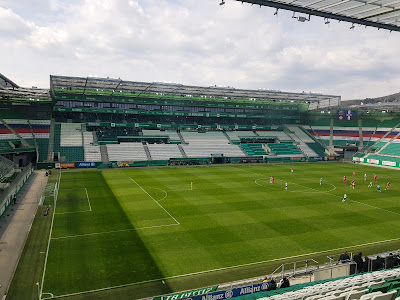 The remainder of the ground is a bowl so all four quadrants are filled with seating. The whole of the South Stand has rail seating for the most ardent home fans and netting is hung from roof over this area only. There is a segregated zone for away spectators in the north-east corner which again has rail seating. The whole of the rest of Allianz Stadion has regular seating. The South Stand also has some additional club facilities including the ticket office and a large club shop. 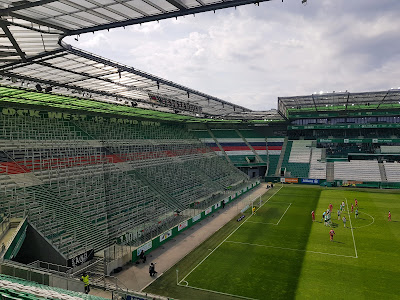 The match was a 2nd division game between Rapid Vienna's second side and Vorwärts Steyr. The visitors were just keeping their head above relegation to the regional leagues whilst the hosts were a little higher in mid-table. There was little happening in the early going with away keeper Thomas Turner taking crosses well to get the game goalless. In the 23rd minute Vorwärts took the lead with just their second attack of the game - the ball was crossed from the right and found Gerhard Dombaxi at the back post. Dombaxi shot and though Vienna keeper Laurenz Orgler got a hand to it he couldn't stop the ball going into the back of the net. Rapid's best chance in the opening 45 minutes came five minutes before the break - a cross into the area was met with a downward header towards goal but with little pace on the ball Turner had time to get down and palm it away. Into the second half and the away side came close to extending their lead in the 51st minute as a rasping 20-yard drive by Luca Mayr-Fälten came back off the crossbar. This proved important as five minutes after this the home side made it 1-1. Nicholas Wunsch slipped in half-time substitute Oliver Strunz and he calmly slot past the goalie into the bottom corner from the left side of the box. The game then entered an end-to-end phase - in the 68th minute Rapid's Dalibor Velimirovic spun and shot just wide of the scrambling Turner and then in the 73rd minute Vorwärts' Alem Pasic got a shot away under pressure from defenders forcing Orgler to push behind from a corner. From the resulting corner the ball was initially cleared but in the second phase Christopher Krohn whacked the ball home to re-establish the visitors' lead. This didn't last long though as with ten minutes remaining a Rapid corner was headed to the back post by Rene Kriwak and the ball, having hung for an age, eventually well just over the keeper's outstretched arm and into the corner of the net. This was disappointing for the visiting fans who kept the noise up all game to try and create an atmosphere in a stadium less than 2% full. In the end Vorwärts had to settle for a point and get the points needed for safety from their remaining fixtures. 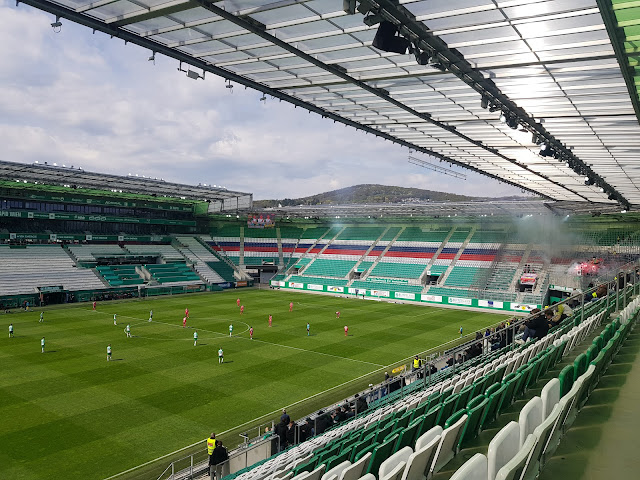