My thirty-first new ground of 2019 was on Wednesday 1st May at Beechwood Park in Auchinleck, East Ayrshire, Scotland. The match was Auchinleck Talbot vs. Petershill in the West of Scotland League Premiership.

Beechwood Park is in the southern half of the town with it surrounded by housing on all sides bar the access road to the east. Less than half a mile south-east of Auchinleck railway station the venue has been home to the club since 1909. 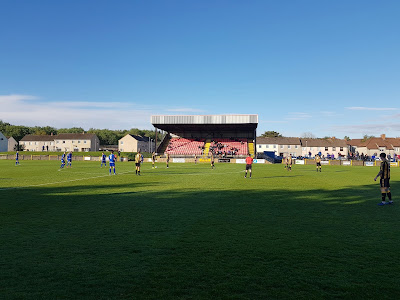 The eastern side is dominated by an all-seater stand with a total of 432 seats with a walkway splitting it into two sections of 216 seats each. This stand was opened in 2003 and was refurbished in 2014 including the replacement of all seats with ones from Bristol City as they redeveloped their Ashton Gate home. The stand is bookmarked by a four level uncovered concrete terrace with a flat dirt area behind the southern section and a grass bank behind the northern section. 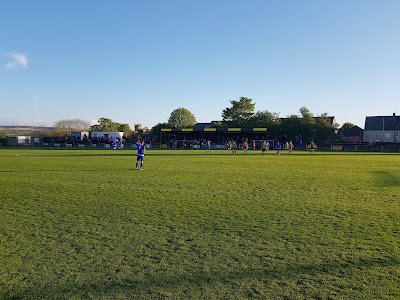 The west side of the field has a six level concrete terrace for most of its length. Formerly fully open to the elements an enclosure was created for the middle third of this side in 2013. The west also has the two dugouts in the centre and a food outlet in the south-west corner. By the entrance in the south-east corner is a clubhouse with a pleasant bar, a committee room and dressing rooms. There is a concrete walkway in front of this to lead viewers towards the next designated spectator area - a covered five level concrete terrace directly behind the southern goal. Netting has been put up in between the stand and the goal so supporters are at least protected from any wayward shots. Beyond this the concrete walkway takes over once more leading to a small club shop in the south-west corner. The northern end is the sparsest - it consists of a walkway with a slim grass bank above this for uncovered standing. The north-west corner has additional turnstiles which have been required during the club's recent cup runs. 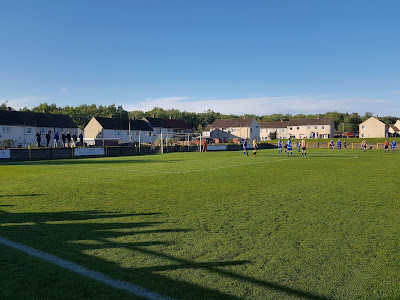 Auchinleck went into the game as red-hot favourites with the side in 2nd place in league. With a run all the way to the last 16 of the Scottish Cup leaving them with six games in hand on leaders Hurlford it was almost inevitable the title would be theirs. Peterhill meanwhile would heading back down to the West of Scotland Championship after one season at Premiership level. The early going was pretty tepid with the first action of note coming in the 21st minute when a Dwayne Hyslop free-kick skimmed the outside of the post and landed behind the net. Some home fans started celebrating in error as from some angles it appeared the ball had gone in. Just before the 30 minute mark the visiting keeper tipped over Keir Samson's shot from the left side of the area. The danger was not over though and from the resulting corner David Waite's set piece was met by the head of Sean McIlroy who directed the ball into the roof of the net. While many expected the floodgates to open the away side enjoyed their best spell after this producing a couple of decent efforts. This continued into the second half with Peterhill surprisingly being the better side. A free-kick in the 51st minute almost caught out home goalie Andrew Leishman who had to get down quickly to block the ball from sneaking in. With a depleted squad Peterhill attended the game with no substitutes and this began to tell as Auchinleck threw on some fresh legs. In the 77th minute the away side were lucky to not be reduced to ten men when a defender scythed down Keir Samson when he was in on goal. Five minutes after this Sean McIlroy cut inside and unleashed a curling effort from 25 yards which was well saved by the keeper. In the 85th minute he had to react again to deny Graham Wilson's shot from inside the box after a cross from the right. Right to the end Auchinleck were not able to kill off the game but a more difficult evening than expected still yielded three points with a one goal victory. 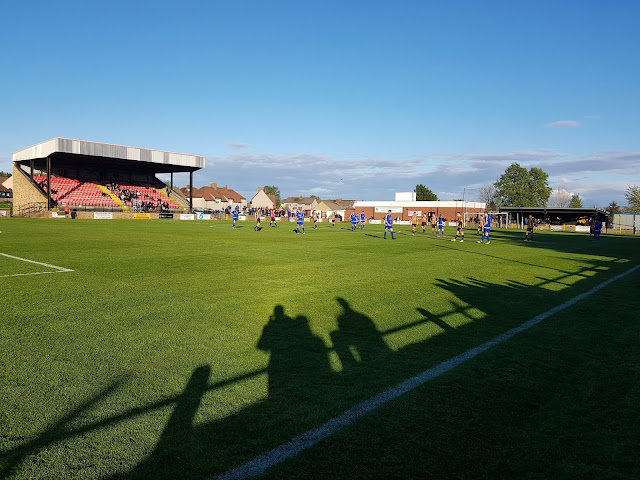