Carrow Road sits close to the banks of the River Yare to the south-east of the city centre. The north-east side is across from a storage facility with a retail park to the north-west. The south-west side has apartment blocks between the stadium and the river while the south-east side a car park with the club's community sports centre beyond this. The venue is half a mile south-east of Norwich railway station and has been home to Norwich City since it was built in 1935 after the club departed their former ground The Nest. 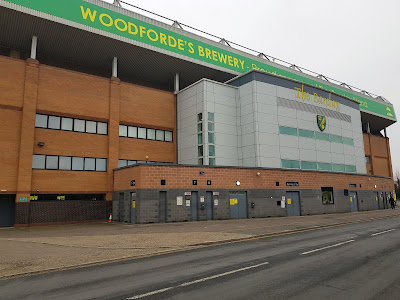 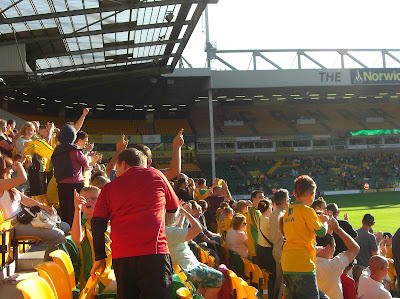 The largest stand at the ground is the single-tier South Stand which was opened in 2004. This structure has a cantilever roof and executive boxes all along the back. This stand can accommodate 8,212 spectators including away fans who reside in the northern portion. The southern section merges into the southern quadrant which is considered a separate stand by the club. This quadrant provides an additional 1,700 seats as well as containing the ticket office on the exterior. The South Stand houses the main reception, players lounge and a number of hospitality clubs. Opposite this is the Geoffrey Watling City Stand which is the smallest in the ground. This single tier structure was built in 1986 and has director's boxes and the boardroom at the back as well as the two dugouts and players tunnel at the front. Either side of the stand are quadrants at the same single-tier height with Thorpe Corner in the northern corner and Wensum Corner in the southern corner. The latter corner houses the club shop. 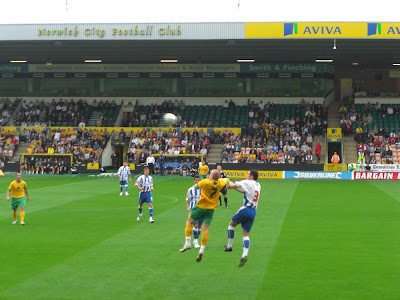 The two other main stands in the ground are the Barclay End, behind the goal on the north-east side of the venue, and the River End, behind the goal on the south-west side of the venue. Both are similar structures with two tiers of seating split by hospitality boxes between the two tiers. The north-east end has a couple of hospitality clubs while the south-west end has corporate lounges, Delia's Restaurant and Yellows Bar & Grill. The Barclay End, the newer of the two, was completed in 1992 while the River End is the oldest in the ground dating back to 1979. The eastern corner between the Barclay End and South Stand is the only corner with no spectator areas and this will remain the case as a Holiday Inn hotel opened on the site in 2007. 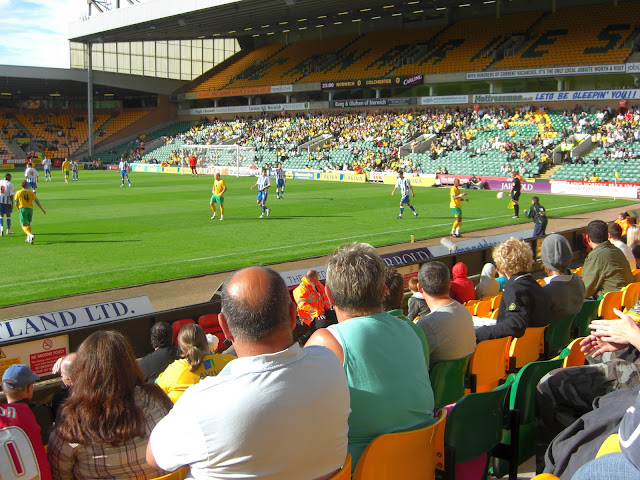 Upon promotion to the Premier League in 2011 the club added extra rows of seating to increase capacity to 27,244. However, with the club operating at near-capacity even while they were playing in the third-tier of English football during the 2009/10 season the club definitely has a large enough fanbase to warrant expansion. The club have mooted the idea of rebuilding the smallest stand in the ground, the Geoffrey Watling Stand. in an attempt to raise stadium capacity to 35,000. However this is dependent on an extended stay in the Premier League.
Posted by Jon Hayes at 22:04