My fifty-fourth new ground of 2019 was on Saturday 7th December at Niedersachsenstadion in Hannover, Lower Saxony, Germany. The match was Hannover vs. Erzgebirge Aue in 2. Bundesliga.

Niedersachsenstadion is in a sports park just south of the city centre. The stadium is at the top end of the park with multiple football pitches to the south along with a tennis court, swimming pool and concert centre. The western side of the ground is flanked by trees with the River Ihme beyond while the eastern side has park land and Maschsee Lake after this. The northern side has a large car park and there is a fanzone across the street from the north-east corner of the stadium. The venue is well served by transport links with it being 1.5 miles south of Hamburg Hauptbahnhof railway station and within a mile of the metro stations at Hannover Stadionbrücke, Hamburg Allerweg and Linden Fischerhof. The stadium became home to the club in 1959 when they departed Eilenriedestadion in the east of the city. Eilenriedestadion was retained by the club and is still used by the reserve side for German league matches. 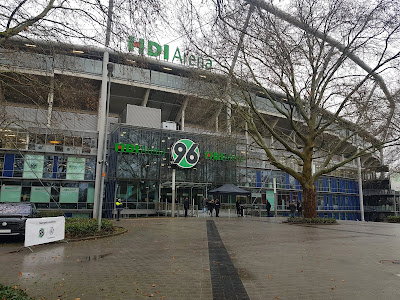 The 49,200 capacity Niedersachsenstadion is an asymmetrical oval that was extensively renovated in 2004 in readiness for the 2006 World Cup. It is a two-tier bowl the whole way round though the eastern side has a different look due to it being the corporate section. This side has a row of executive boxes at the back of the lower seating deck and then has a small middle deck with more corporate boxes and a few rows in seats in front. The upper deck contains the media section while the two dugouts are at ground level. 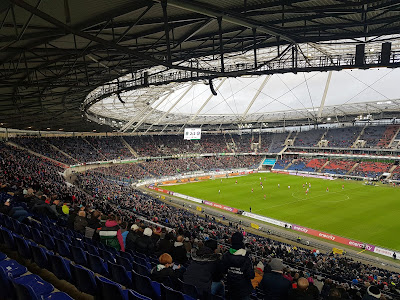 The rest of the ground is pretty similar though interestingly there are large flat areas between the upper and lower decks and the curve of the seating leads it to be set some way back from the pitch. This is a legacy of the design prior to 2004 which had an athletics track included. The home ultras reside in the lower deck of the north stand while away fans are positioned in the south-west corner. The back of each tier has large open concourses with plenty of food vendors while externally the club shop and ticket office is located in the north-east corner. 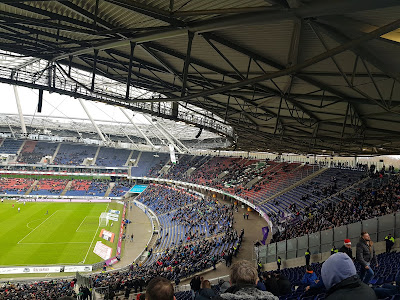 Hannover were struggling in their first season back in the 2nd tier and found themselves just two points above the relegation play-off place going into kick-off against an Erzgebirge side looking to get into the promotion mix. Things didn't start well for the hosts as they fell behind in the 16 minute - Erzgebirge defender John-Patrick Strauss lifted a floating cross from the right corner of the area which ended up flying over the head of Ron-Robert Zieler and into the back of the net. Hannover got back on level terms in the 32nd minute in simple fashion when Marvin Bakalorz outjumped several away defenders to head home Miiko Albornoz's corner. That was how things stayed until the interval but it took less than four minutes of second half for Hannover to relinquish their lead. They only had to deal with a routine free-kick by the visitors but when goalkeeper Zieler came to claim, Bakalorz did not hear a shout and headed it over his teammate into the back of his own net. With no Erzgebirge attackers anywhere near the pair of them it was an embarrassing situation for Bakalorz to cancel out his own first-half equaliser. For the remainder of the event the visitors attempted to grind out their win by dropping deep which invited the hosts onto them. Linton Maina almost restored parity when he headed Miiko Albornoz's at Martin Männel who tipped over well. An equaliser duly arrived in the 75th minute - Marvin Ducksch's free-kick was sent into a dangerous area where Hendrik Weydandt met it with a powerful header to make it 2-2. Hannover kept pushing and in the last minute of the 90 a long ball up field was headed on by Hendrik Weydandt to Genki Haraguchi who threaded his way in between two defender and poked home to secure a first home win of the season for the home side. 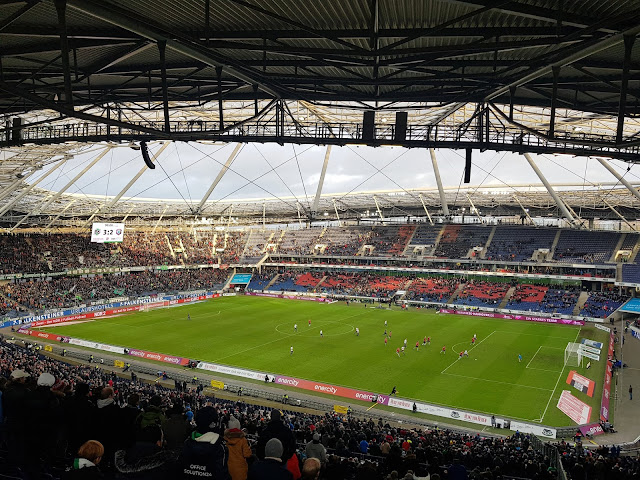