My first new ground of 2013 was on Tuesday 1st January at Broadfield Stadium in Crawley, West Sussex. The match was Crawley Town vs. Colchester United in Football League One.

Broadfield Stadium is part of a larger sports complex to the south of the town centre and is just over 1 mile from Crawley railway station. The ground has been home to the club since 1997 when they moved from their former home at Town Mead where they had played for the previous 48 years. 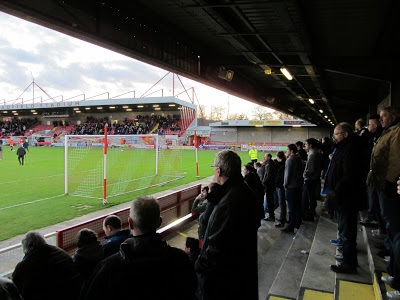 The West Stand runs around two-thirds of the length of the pitch on the west side of the venue and is able to house 1,150 supporters. This stand also contains many of the club's facilities including hospitality areas and players dressing rooms. Opposite this is the newly built East Stand which was finished in April 2012. This formerly uncovered terrace is now an all-seater stand with a capacity of 2,150. It has around 20 supporting pillars in place to hold up the roof so anyone in this stand will have a slightly impeded view. 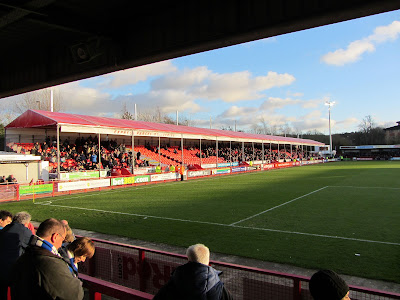 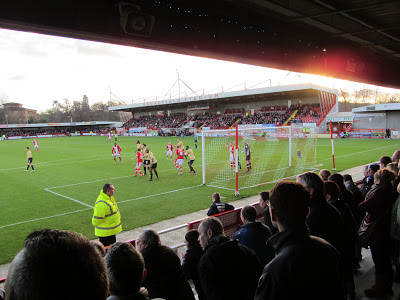 The game saw Crawley take an early lead in the 5th minute when a free-kick routine exposed the disorganised Colchester defence. Billy Clarke was left unmarked in the box to shoot from close range and although his shot was saved Mark Connolly was on hand to tap in the rebound. The home side nearly doubled their lead a couple of minutes later but a save by Mark Cousins kept the score at 1-0. Colchester got better as the half progressed and had a couple of decent chances including a shot cleared off the line. This theme continued at the start of the second-half as the visitors chipped away at the home defence in an effort to get level. However, in the 70th minute the hosts doubled their lead after a Mark Cousins clearance went directly to Billy Clarke who ran in to score. The ended the game as a contest and in the 86th minute Crawley added a third when Nicky Adams ran onto a ball over the top and lobbed the advancing Mark Cousins to seal a 3-0 win for the home side. 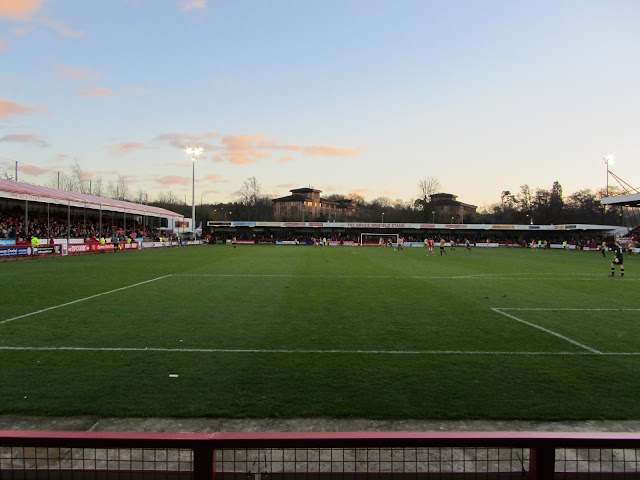