My thirtieth new ground of 2018 was on Saturday 10th November at the Crown Ground in Accrington, Lancashire. The match was Accrington Stanley vs. Colchester United in the F.A. Cup 1st Round.

The Crown Ground is situated in the north of Accrington around a mile from the town centre. The site is mostly nestled amongst housing though there are two full-size pitches to the east of the ground. The Crown Ground is nearest to Accrington railway station one mile south though there are two other lesser used stations within walking distance with Huncoat station one mile east and Church & Oswaldtwistle station a mile and a half south-west. The venue was opened in 1968, the same year the club reformed after the collapse of the original club which existed between 1891 and 1966. 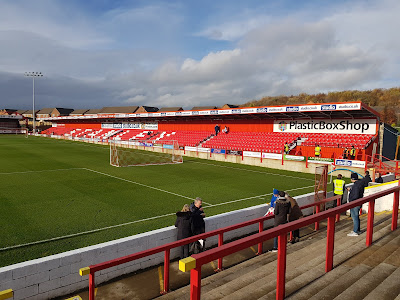 The west side of the ground has what looks like a single stand but is in fact two adjoined stands - the Thwaites Stand and Main Stand (also known as the Jack Barret Memorial Stand) is all-seater and almost runs the length of the field. The two stands are split around the halfway line by a separate area containing a handful of seats for home and away management and substitutes. Above this middle section there is a TV gantry atop the roof. At the back of the stand on the northern side of the halfway line there is a small corporate area which can be accessed externally via a hospitality bar. Non-corporate fans are catered for in the Redz Bar Fanzone; a tented drinking area for both sets of supporters. This side of the ground also includes the ticket booth and a very small club shop. The south-west corner has a separate building for the player and officials dressing rooms. 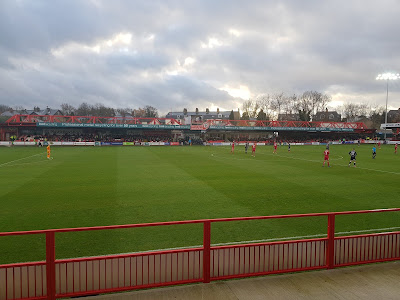 The newest stand can be found running down the eastern side of the Crown Ground. The Whinney Stand was opened in October 2018 and is an all-seater structure with 1,100 seats spread across six rows. This stand can be partially or fully assigned to away fans wishing to sit while watching the game. The traditional away section is the Coppice End. This is an uncovered terrace consisting of 16 levels of concrete with an additional 7 levels of temporary metal terracing which have bolted onto the back of the original stand. Around 1,800 supporters can view the game from one of the few remaining uncovered stands in the Football League. Behind the stand is a food outlet while the south-east corner houses a police control box and a big screen TV. The remaining stand behind the northern goal is the Clayton End. This concrete terrace is for the noisier home fans and was uncovered up until 2007 when a roof was added to it. 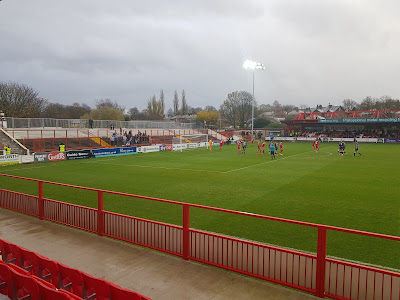 The match was an F.A. Cup 1st Round tie between Football League One side Accrington Stanley and Football League Two side Colchester United. The first clear chance of the game fell to the visitors after 15 minutes. The ball broke kindly for Colchester in the middle of the park and with Accrington pushed up Frank Nouble had a clear run at goal. After going for 30 yards Nouble reached the edge of the area and shot straight at Connor Ripley who deflected the ball just over the bar. The early going saw the U's on top but they failed to make the most of their opportunities. One thing that did not help the visitors was being forced into making two substitutions in the opening half-hour with defender Tom Eastman and goalkeeper Rene Gilmartin going off injured. Unfortunately for substitute goalie Dillon Barnes he had to pick the ball out of his net just four minutes after coming on. A poor pass out of defence by Luke Prosser found Accrington's Dan Barlaser. He was allowed far too much time to advance into the area before he fooled Prosser and Tom Lapslie by sending them the wrong way and then cracked a shot at goal which deflected off Frankie Kent before looping into the bottom corner of the net. This goal perked up the hosts and they enjoyed a good spell in the game either side of the break. In the final minute of the half they almost went 2-0 up as a 25-yard effort from Sean McConville went just the wrong side of the post. In the 52nd minute a great chance went begging for Accrington when Billy Kee played Jordan Clark in on goal and from the right side of the area with just Barnes to beat he shot into the palms of the Colchester keeper. The remainder of the half was fairly even with chances at a premium. It wasn't until the final few minutes that the hosts began to sit back allowing Colchester time on the ball. In truth Connor Ripley was rarely threatened and the home side saw out the game to move onto Round 2 at the expense of the U's who exited the competition at the 1st Round stage for the third year running. 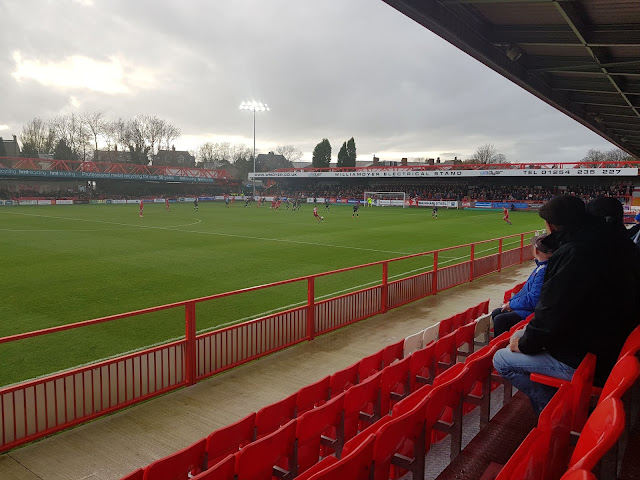