My thirty-eighth new ground of 2019 was on Saturday 6th July at Jubilee Park in Huntingdon, Cambridgeshire. The match was Huntingdon Town vs. St Ives Town in the Huntingdonshire FA Premier Cup.

Jubilee Park is in a very rural setting to the north-east of the town where the club takes its name. The complex is surrounded by fields on all sides save a road running to the south of the venue which provides access to it. The ground is bordered by trees which keep it apart from an additional four full-size pitches and the gravel car park on the southern side of Jubilee Park. The venue is 2.5 miles north of Huntingdon railway station and has been home to the club since 2003. 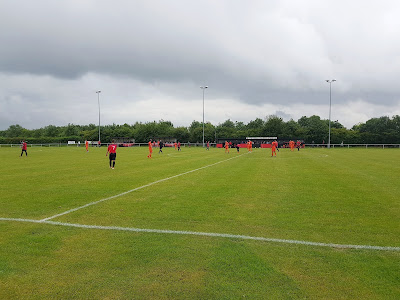 The ground's construction allowed the side to progress into senior football in the United Counties League. Since opening in 2003 the venue has gradually progressed with the current clubhouse by the entrance built in 2009. This building has a small bar and a snack outlet before opening up into a covered area with half a dozen picnic benches. In front of this is an uncovered grass area before a strip of concrete takes you to the edge of the southern side of the pitch. Adjacent to the clubhouse is a linked changing room building. 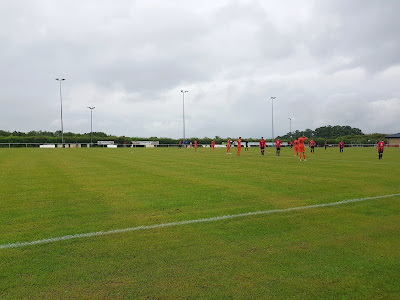 The western flank has three separate stands. The Brian Waldock Stand is a covered hard standing area which straddles the half-way line and has the two dugouts built into it. Towards the southern end are two metal 'arena' stands which were built during the early part of the decade - each provide 50 seats ensuring the total seating capacity of 100 meets ground grading requirements. The rest of this side is uncovered standing with slabs of concrete by the pitch and grass behind this. The pattern is then replicated on the eastern and northern sides of Jubilee Park with plenty of space for additional stands in the unlikely event of them ever being needed. 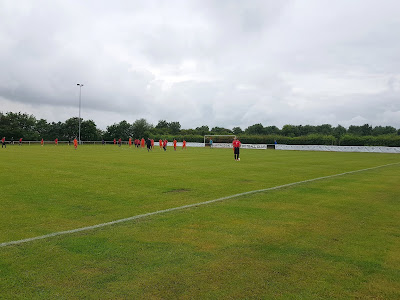 The game was part of the Huntingdon FA Premier Cup pre-season tournament involving four sides from the area. This group stage match-up involved United Counties League Division One side Huntingdon Town against Southern League Premier Division Central team St Ives Town. The three-division gap between the sides was very evident in the opening quarter of an hour. Even inside the first minute St Ives attempted to lay down a marker when Charlie De'ath headed a free-kick off the outside of the post. The first goal arrived in the 9th minute when a long throw bounced in the six yard box and was nodded on to Josh Dawkin at the back post. Dawkin struck across goal into the bottom corner with a deflection off keeper Quincy Shorunmu on the way in. Just six minutes later it was 2-0 as a corner from the right flew over the top of Shorunmu, found the head of an attacker who directed the ball into the post, and rebounded off Jake Newman on the goalline to roll into the back of the net. Huntingdon came into the game a little after this but it was still St Ives who went closest to netting again - in the 35th minute a ball over the top found Charlie De'ath but just as he pulled the trigger a good tackle from a covering defender ensured the ball only went out for a corner. A few minutes later Jake Newman was played clean through with his effort saved by Shorunmu and the follow-up blazed over by Ben Baker. With the result not in doubt the second half was a classic low-tempo pre-season game with both sides swapping all eleven players and very little else happening. There was a brief flurry of activity in the closing minutes with the hosts having their best effort with a 20-yard drive just wide of the post while a St Ives striker nipped in front of a defender and shot off the post with five minutes left on the clock. The referee went through the motions of playing a few minutes of injury time but the game was well over as a contest by the time the final whistle sounded. 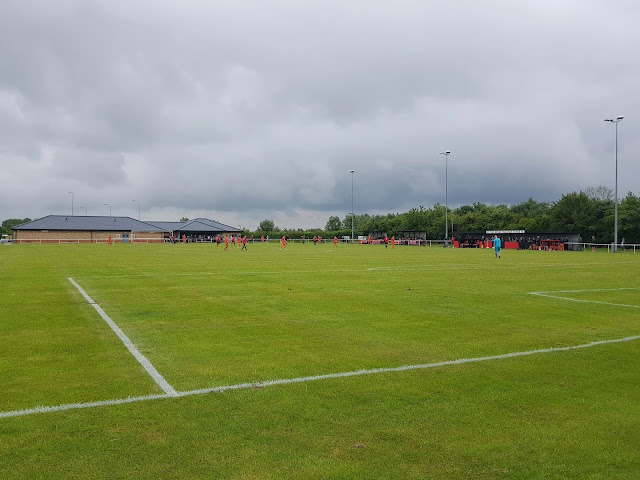