My forty-second new ground of 2011 was on Monday 1st August at Stonebridge Road in Northfleet, Kent. The match was Ebbsfleet United vs. Gillingham in a friendly game.

Stonebridge Road is only 400 yards from Northfleet railway station so is easy to get to when going via train. The ground has been home to Ebbsfleet United (and its previous incarnations) since 1905. 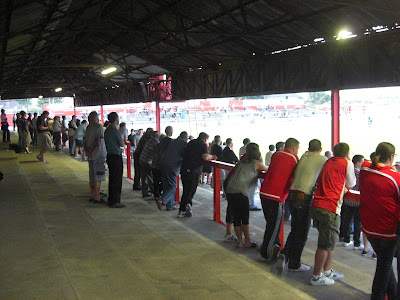 During my visit the stadium had two all-seater stands with the rest being terraced standing areas. The Main Stand on the north-east side runs about half the length of the pitch and can hold 629 fans. To the left of this stand there is a small terraced area in between the Main Stand and the Northfleet End on the south-east side of the stadium which adds another 196 to the ground capacity. The Northfleet End, is an all-seater stand capable of holding 534 fans. Rather than being built from scratch the club built the seats on top of the original terrace meaning there is a large area of disused terrace behind where the seats end, giving it a slightly odd look. 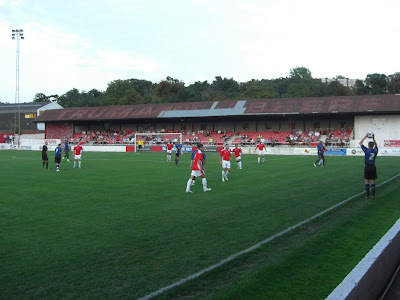 The other two viewing areas are the Swanscombe End and the Stonebridge Road Stand. The Swanscombe End is a 2,394 capacity open terrace on the north-west side of the ground, where away fans usually reside. The Stonebridge Road Stand was a terrace running the length of the pitch on the south-west side of the ground which had uncovered quarters on its left and right sides with the middle half of the terrace under a roof. In 2016 this stand was replaced by a new 1,016 all-seater structure. With a high roof relative to the seating deck this has plenty of space for corporate facilities, something previously lacking at the venue. 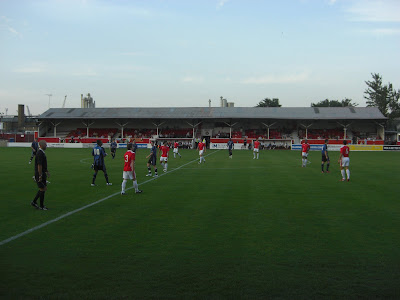 The game was a pre-season friendly between Conference National side Ebbsfleet United and League Two side Gillingham. The first half saw good running from the non-league side who created numerous chances but were unable to score. Their league opponents rarely threatened and so it remained goalless at the break. Ebbsfleet started off the second period in tenacious fashion, carving out more opportunities, but they were let down by their finishing and could not score. Just when it looked like the hosts were never going to score they got their reward on 66 minutes when they raced into the Gillingham box and drove the ball home. Ebbsfleet continued to be the better team but could not add to their lead meaning the game finished 1-0 to the hosts. 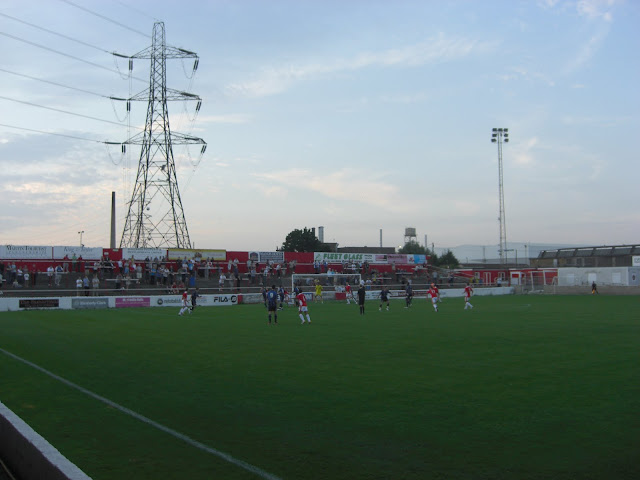