My thirty-first new ground of 2018 was on Wednesday 14th November at Stoneham Park in Eastleigh, Hampshire. The match was AFC Stoneham vs. Whitchurch United in Wessex League Division One.

Stoneham Park is situated in the Jubilee Recreation Ground which itself forms part of a large area of green space around the junction between the M3 and M27 motorways. The ground is in the southern part of town not far from Eastleigh's primary football club Eastleigh FC. The nearest railway station is Southampton Airport Parkway which is 1.5 miles east whilst Eastleigh railway station is 2 miles north-east of the ground. Stoneham only moved to the venue in 2002 but it will be a short stay as they will be moving to a new home at Monks Brook in late 2019. 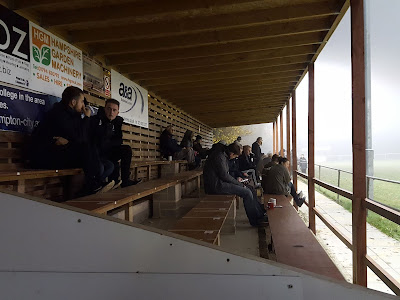 The entrance to the ground is at the northern end and by the turnstile is the dressing room building for players and officials. A walkway then heads in the direction of the pitch with the walkway running adjacent to a mini pitch also used for car parking. Behind the northern goal there are concrete slabs forming a hard standing area. The main side of the ground facilities wise is the eastern one. Working from north to south there is a physio building followed by a tea hut with the outlet facing towards the pitch. Beyond this is a covered wooden stand with four rows of benches. There is hard standing available for the entire length of the eastern side. 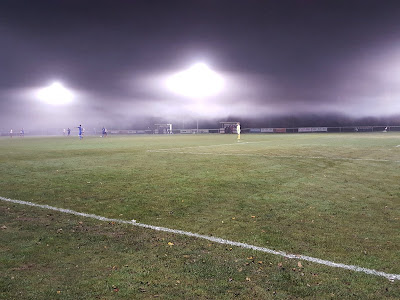 By comparison the western side has no hard standing whatsoever with just grass for the whole side. With trees in place behind this section there is limited space for anything to be constructed though the two dugouts are either side of the half-way line. The southern end is similar in that there is no hard standing with only grass for spectators to perch on. There is however much more space behind due to additional mini-pitches. There is a snack outlet in the south-east corner known as The Purples BBQ Shack but this was closed on my visit. 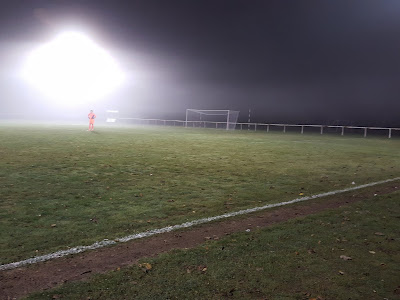 The visitors had the best chance of the opening ten minutes - Liam Stone was played clean through but his shot came back off the foot of the post. The home side had a great chance of their own in the 22nd minute when a quick free-kick found Josh Clark on the right side of the are and his squared ball was just waiting for Alex Welch to make contact to poke the ball home. Unfortunately for Stoneham he just couldn't get on the end of it and the chance was lost. The next good opportunity fell to the away team in the 28th minute - a long ball up field saw Stoneham keeper Luke Eaton in a foot race with Corey Cherrett to get to the ball first. In the end it was Cherrett who managed this and looped the ball towards goal. Unluckily it bounced bar off the crossbar and into the thankful hands of Eaton. Things were not going so well for the Stoneham goalie's opposite number Josh Cotton who found himself in trouble on the half-hour mark. Josh Clark was sent in one-on-one with him and Cotton tripped the forward outside the box. The referee consulted with his assistant before issuing a straight red card. With no sub goalie it was left-back Craig Rutledge who donned the gloves. Rutledge saved the resulting free-kick but did have to pick the ball out of the net in the 43rd minute as Marcel Laptas was unleashed down the left before running in on goal and scoring from close range. There was a near-carbon copy just 60 seconds later with this time Sergio Caballero making his way down the left unchallenged. On this occasion Caballero was not as clinical and shot wide. Whitchurch put up a good fight in a quiet second half. The subdued period could have had something to do with the extremely foggy conditions which meant you could not see from one side of the pitch to the other. It would not have been a surprise to see an abandonment but the officials persevered and there was late drama for the spectators to enjoy. In the 82nd minute an innocuous cross into the Stoneham area found a home defender but his attempt to nod back to his keeper was misjudged and he gave it directly to Nick Yeomans who slotted home from inside the six yard box. Sadly for Whitchurch parity lasted all of one minute. From the kick-off the ball was sent over to Joe Sutherden on the right of the field and his lofted ball into the area was completely missed by replacement keeper Rutledge allowing Matt Bainbridge to head into the empty net to secure a 2-1 victory for Stoneham. 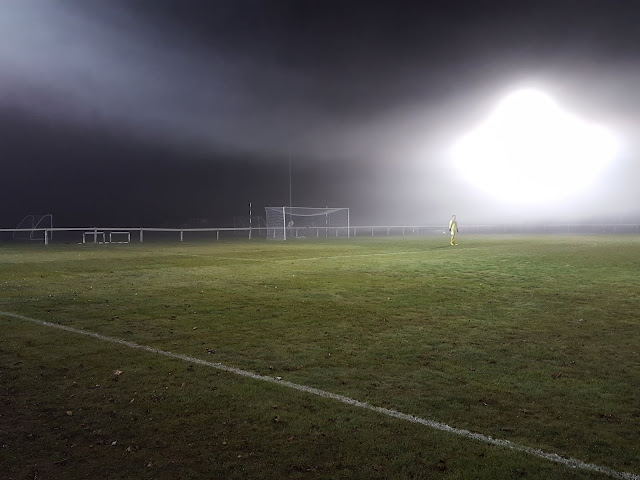