My second new ground of 2013 was on Saturday 19th January at Bootham Crescent in York, North Yorkshire. The match was York City vs. Aldershot Town in Football League Two.

Bootham Crescent was squeezed into a residential area close to the city centre. The ground was around 1 mile north of York railway station and had been home to the club since 1932 when they vacated their previous home in the south of the city at Fulfordgate. The club left Bootham Crescent in 2020 to move to the new all-seater York Community Stadium on the outskirts of the city. 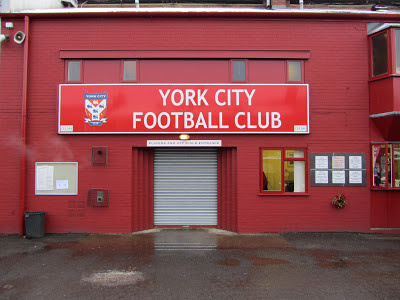 I watched the match from the Main Stand which ran two-thirds of the length of the pitch on the east side of the venue. The Main Stand was split into two sections, with the front half consisting of plastic seating and the back half consisting of wooden seating. Those in the back section had a number of supporting pillars which restricted views of the pitch. Opposite the Main Stand was the Popular Stand which ran the full length of the pitch on the west side of the ground. This had around half a dozen supporting pillars and the southern end of the stand was often given over to any away fans who required seating. The combined seating for these two stands was 3,400. 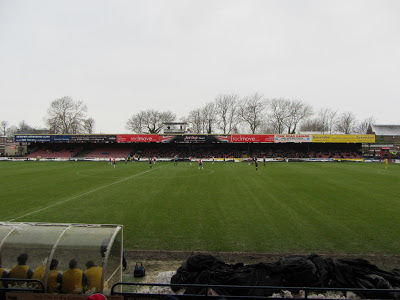 The area behind the goal at the southern end of the ground housed the Grosvenor Road End - a narrow uncovered terrace where away fans were placed. For those sides who did not bring a large away following only a small section of the 2,000 capacity stand was opened up. At the opposite end of the pitch was the David Longhurst Stand. This covered terrace is where much of the core home support watched from with most of the noise generated during the match emanated from this stand. 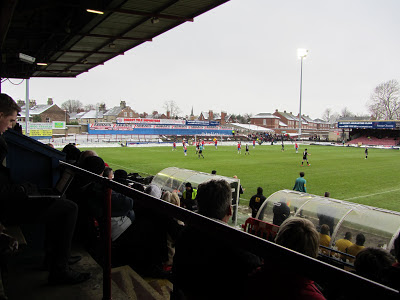 The game was a really poor one with neither side creating very much at all during the course of the 90 minutes. Most of the first period was spent in the York half of the pitch and the crowd became frustrated as the home side spent much of the first half passing the ball back and forth between their defenders and goalkeeper. Aldershot weren't much better but did at least manage to create a couple of half-chances. Just before the break York had their first meaningful attempt at goal when Michael Potts' long-range effort was pushed wide by Aldershot keeper Jamie Young. The hosts improved during the second half but rarely managed to test the away goalkeeper. The visitors also failed to offer much in the way of attacking football though they did hae the best chance of the game with 10 minutes to go when Craig Reid blazed over the bar from close range. With neither side deserving to win it was not a surprise to see the match end goalless. 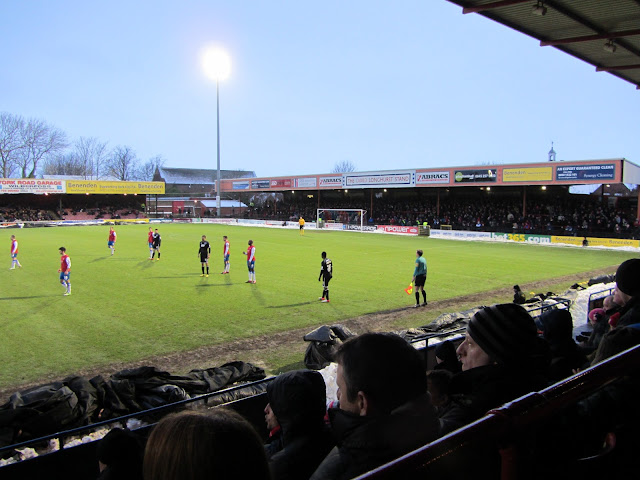