My forty-seventh new ground of 2019 was on Tuesday 1st October at the bet365 Stadium in Stoke-on-Trent, Staffordshire. The match was Stoke City vs. Huddersfield Town in the Football League Championship.

The bet365 Stadium is located in a business park in the south of the city, adjacent to the A50 road which runs to the north. The east of the ground borders a road with a hotel, restaurant and car dealership beyond. The southern edge runs up to more car dealership while the western side has a large car park with the West Coast Mainline line after this. The railway line leads up to the nearest station, Stoke-on-Trent station, two miles to the north. The venue was opened for the club as the Britannia Stadium in 1997, replacing their old home at the Victoria Ground where they had played from 1878. 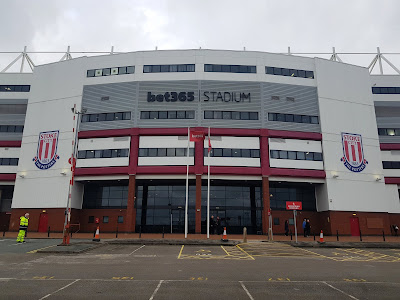 The West Stand towers over the stadium as the only two-tier structure at the venue. The 7,357 seater stand has a larger lower deck of seating with hospitality boxes all along the back and this set-up is repeated at the back of the smaller upper seating deck. These upper tier boxes are split by a TV gantry which has a separate media section in front of it carved out of the main seating area. This stand also has the club reception leading out to a large car park. Attached to this stand in the south-west corner is the administrative part of the club with the shop and ticket office. 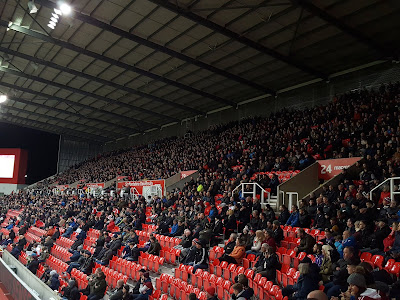 The South Stand was originally a stand-alone structure like the West Stand but in 2017 the open space between it and the East Stand was filled in meaning the South, East and North sides now form a continuous single-tier bowl. The North and South Stands have identical capacities of 6,006 with the southern end being the designated one for away supporters who spread out from the south-west corner. Including the south-east and north-east quadrants the East Stand can hold 10,720 supporters pushing the venue's total capacity just over the 30,000 mark. 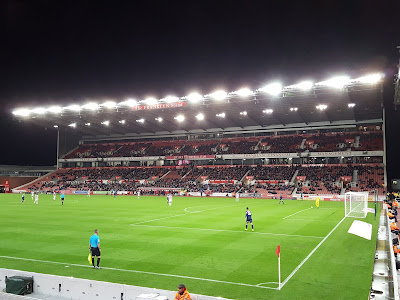 This was a battle of the two basement sides in The Championship with Stoke and Huddersfield both winless after nine games apiece. The game was evidence of why the sides were at the bottom of the table and was a dismal spectacle. Huddersfield's best opportunity of the first half came after just five minutes when Karlan Grant crossed from the left and with all the time in the world to tee himself up Elias Kachunga fluffed his side and scuffed well wide from ten yards. Stoke for their part can point at a chance a couple of minutes before the interval when Cameron Carter-Vickers whipped cross in found Joe Allen in acres of space ten yards from the net. His free header however failed to get near the goal. The second half was a marginal improvement but still a very poor game. Stoke huffed and puffed against a Huddersfield side who were happy to sit back and play out a goalless affair. The home side's shooting though was absolutely dreadful and not a single one of their 18 efforts were on target. This ended up costing them anything from the game as in the 82nd minute Huddersfield set-off on a counter attack which really got going when Juninho Bacuna played an excellent ball to Adama Diakhaby down the right wing. Diakhaby squared the ball for Bacuna who had continued his run from his own half and the Brazilian smashed the ball home to score the only goal of the game. The home fans hoping for this to at least spur Stoke into action to try and salvage a result were disappointed as it in fact had the opposite effect. The home side limped through the final minutes of the game in a lackadaisical fashion and were rewarded with their eighth defeat in ten games, exactly what they deserved from their evening's performance. 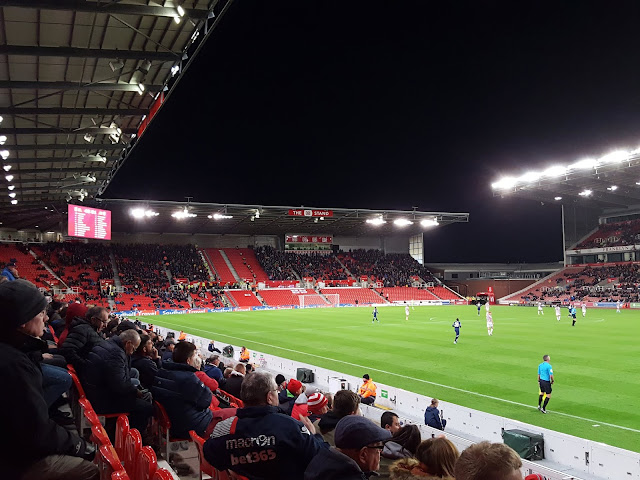