My forty-third new ground of 2019 was on Tuesday 20th August at The Oakwood in Crayford, London. The match was VCD Athletic vs. Three Bridges in the Isthmian League South East Division.

The Oakwood is in a mainly residential area with housing to the south and west of the ground. The north and eastern sides are bordered by the rest of the sporting complex it sits on with an additional full-size pitch to the north and Oakwood Tennis Club to the east. VCD Athletic are based just a few hundred yards south of The Mayplace Ground, home of fellow non-league side Phoenix Sports. The Oakwood is just under a mile north of Crayford railway station though also just over a mile south of Barnehurst railway station. The venue was home to the club between forming in 1916 and 1999. The club then moved out and groundshared at other venues before moving back to a revamped Oakwood in 2006. 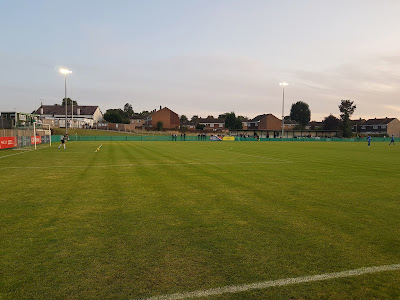 The entrance to the ground is in the south-east corner and immediately to the right of this is a food outlet and toilets. Also in this area are a number of picnic benches atop a paved section with a walkway leading down to the eastern side of the field. This side is home to the main stand in the middle which has a total of 159 seats split into two sections. A third of the seats are on the eastern side of the stand with two-thirds on the western side and a standing section in the middle. 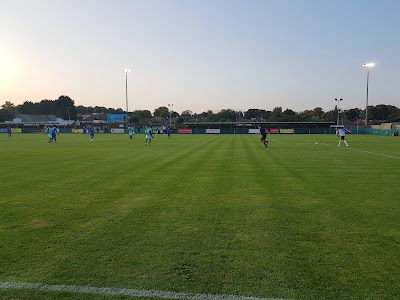 The northern side of the field is split into thirds with covered standing sections in the eastern and western areas and an uncovered section in the middle which includes dugouts and a TV gantry. The western end has a strip of concrete with netting behind the goal itself. Further back is a grass section and this area also leads to the player and officials dressing rooms in the north-west corner. The smallest side of Oakwood is at the eastern end with this little more than a concrete walkway between the northern and southern sides. This is mainly due to the natural incline of the land behind the goal and there is a club building which sits atop this slope. 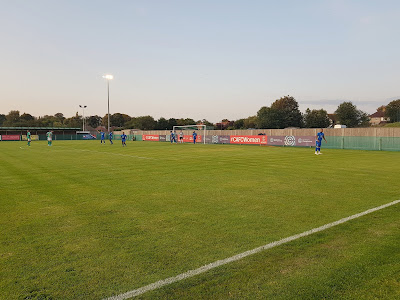 This was the second league game of the season but with both sides losing their opener they would be keen to get some early points on the board. Three Bridges appeared the keener initially as they opened the scoring with less than a minute on the clock when a ball from the left was steered home by Andre McCollin. VCD reacted well and equalised in the 5th minute as Raphe Brown glanced home Kelvin Ogboe's corner. The hosts edged the rest of the first half-hour and went close just before the half-hour stage with a series of shots peppering the Three Bridges goal culminating in Timi Toluwanile's poked effort being blocked on the line. However, in the 43rd minute the visitors got their noses in front for the second time when a quick counter attack down the left found Andre McCollin who ran in on goal and smashed low past the keeper from 12 yards to grab his second of the evening. Three Bridges could not hold on until half-time though as in the second minute for injury stoppages Henry Ikeije beat Michael Aziaya down the left and as he got close to goal was clumsily bundled over for a penalty. Kelvin Ogboe was on spot-kick duties and dispatched his penalty low into the net to send the sides in level at the interval. VCD went ahead for the first time in the 62nd minute - good work by Alastair Gordon in the middle of the field saw him play the ball through for Timi Toluwanile who rounded the keeper and slotted home. The away side pushed forward in search of an equaliser and should have got it in the 72nd minute when Solomon Taiwo danced his way into the area. Unfortunately for Taiwo the ball got stuck under his feet at the crucial shooting moment and the chance was gone. With the game in an end-to-end phase someone was going to score and in the 75th minute it duly happened. A cross from the left by VCD's Jack Steventon was completely sliced by an away defender and he ended up deflecting backwards into the bottom corner of his own net. In the closing stages the game grew ill-tempered. In the 83rd minute Three Bridges were awarded a penalty for a push int he box but a home player refused to let go of the ball resulting in a mass pushing and shoving incident involving most of the players on the pitch. It was difficult to see what was going on through the sea of bodies so the referee took no further action. After a four minute delay Tom Tolfrey took the penalty high to the keeper's left to reduce the deficit to one. Injury time saw some cynical fouls and poor discipline from the sides. It was therefore unsurprising when a red card was produced in the 93rd minute for Three Bridges' Dean Gunner who displayed his frustration as VCD ran down the clock in the corner. The referee blew for time shortly after this despite there probably being a few more minutes to play after all the stoppages but that was good news for the home side who clinched their first win of the season. 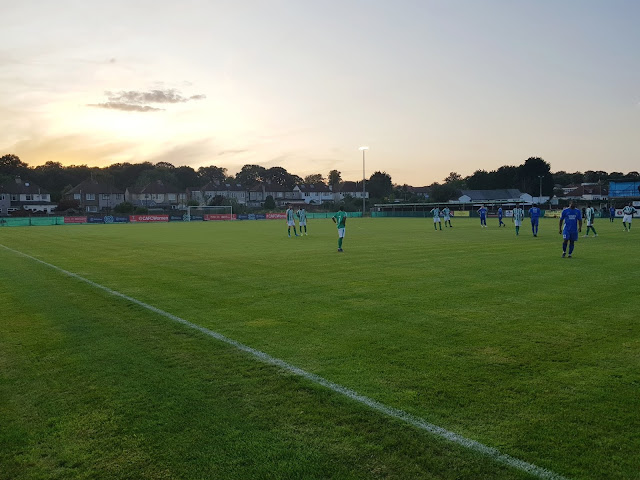