My thirty-second new ground of 2019 was on Tuesday 7th May at Links Park in Montrose, Angus, Scotland. The match was Montrose vs. Queen of the South in the Scottish Championship Play-Off Semi-Final.

As with many older grounds Links Park is situated in the heart of a residential community with housing surrounding the stadium on all four sides. It is however just a stone's throw from the cricket and rugby club beyond the row of houses on the east. The venue is half a mile east of Montrose railway station and has been home to the club since 1887. 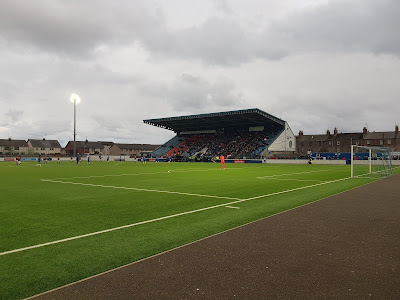 The entrance turnstiles are at the end of a road on the western side of Links Park. Upon entering the club shop is the first thing you will see before turning right to enter the arena. This end has a twelve row covered concrete terrace which curves inward at its northern end. The stand runs for two-thirds of the length behind the goal and has a capacity of 1,582. In front and to the south of the stand is a large flat uncovered gravel section. The southern side has the main stand at the ground. The Bryan D. Keith Stand is a 1,338 capacity all-seater stand with a cantilever roof providing good views of the game. This stand, built in the 1990s, has the players tunnel and dugouts at the bottom with a directors section in the middle accessed via separate doors in the middle of the stand. The stand takes up the middle third of this side with a flat uncovered area to the east and shipping containers to the west including a food outlet. 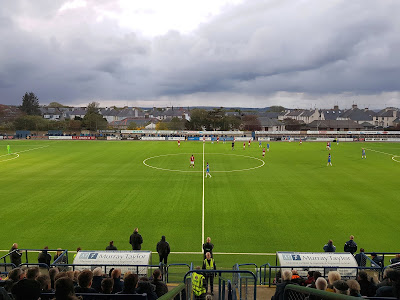 The remaining stand at the venue is a five level uncovered concrete terrace at the eastern end. This has a flat grass section atop it with barriers to rest on. This end tapers slightly towards the southern end and has netting behind the viewing area to catch any loose balls from ending up in the adjacent road or houses. The northern side of Links Park is the only one with no structures with it just consisting of uncovered flat concrete. This side is though fairly spacious so good room for supporters. 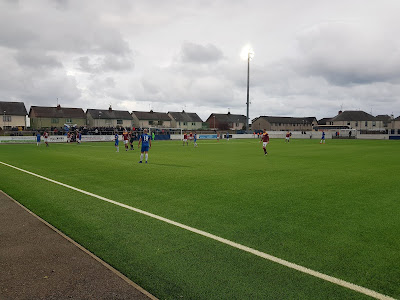 The tie was the first leg of the Championship Play-Off Semi-Final. Montrose went in as the underdogs having qualified by finishing 4th in League One, their highest finish in the Scottish league system since 1992. Queen of the South on the other hand were fighting for survival after finishing 9th in the Championship. The first half was pretty even with few saves required - the visitors went close int he 11th minute when a ball was crossed into the box for Lyndon Dykes who controlled it and shot low back off the post. Dykes missed another opportunity in the 42nd minute when he picked up the ball on the right side of the area but dragged wide with only the keeper to beat. Within sixty seconds this proved costly as the ball went up the other end and while bouncing around the away box Ross Campbell reacted quickly to slide past Alan Martin putting Montrose a goal up at the break. Queen of the South continued pushing after the break and had good chances in the 56th and 58th minutes. The first saw Connor Murray lay off to Fraser Aird who shot just wide of the post from the edge of the area. The second saw Murray take a shot this time from a similar position with Allan Fleming getting down well to save. An equaliser looked on the cards and it duly arrived ten minutes after this - an away counter-attack saw the ball sent over to Murray who whacked it into the top corner from 25 yards leaving Fleming stranded. Queen of the South had worked hard to get level so their fans were unhappy to see them immediately throw this away but going behind again straight from the restart. Montrose punted the ball to the right wing where it was crossed into the area and Ross Campbell were there to trap the ball, spin round and drill home from six yards. After this it was the League One side who had the better of the play and were a whisker away from extending their lead in the 86th minute when Terry Masson ran into the area on the right and cracked a fierce shot back off the crossbar. The hosts dug in with some great tackles in the closing minutes to give themselves a lead heading into the second leg at Palmerston Park. 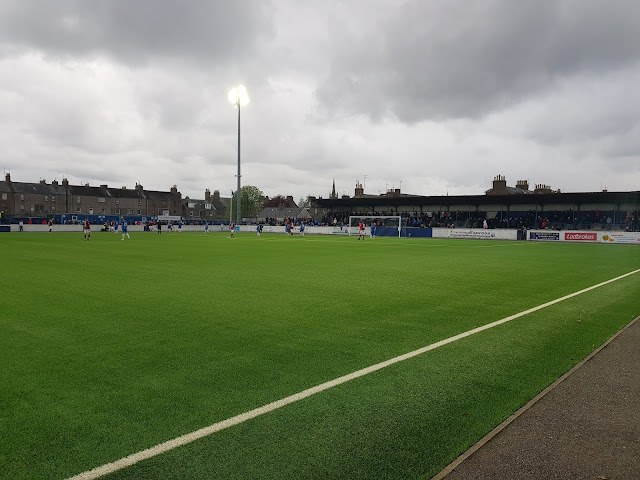