My eighth new ground of 2020 was on Saturday 31st October at The Hawthorns in Brigg, Lincolnshire. The game was Brigg Town vs. Armthorpe Welfare in the Northern Counties East League Division One.

The Hawthorns is part of a sports complex in the north of the small town of Brigg. To the south of the football pitch is the car park and a couple of tennis courts. There are two more tennis courts to the west along with a multi-purpose court, one full-sized football pitch and five mini pitches. A park lies to the north of the Hawthorns with housing to the west. The venue is just under a mile north of the town's railway station but this has very limited services with the nearest regularly served station at Barnetby some four miles east. The Hawthorns has been home to the club since 1959. 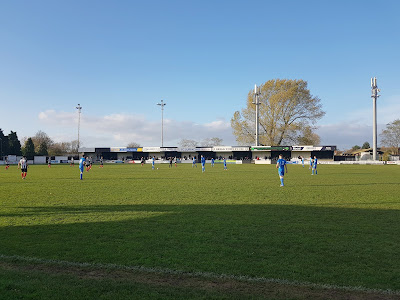 Out the entrance on the southern side of the ground is a large grass area with a playground and around 20 picnic benches with an additional paved area containing more picnic benches. Access to the clubhouse and bar is found in this area as well. This side of the ground has hard standing for the whole length though is split into three distinct sections. The western section is covered with the clubhouse roof extending out over the standing area. There is then a small uncovered area before a stand by the halfway line. This is attached to the dressing room building with the roof of this covering the three level concrete structure underneath. This section has 25 seats bolted onto the concrete for directors to use. Towards the eastern end is a covered two-level concrete section. This stand has three separate cushioned benches and an additional 10 plastic seats at the end. 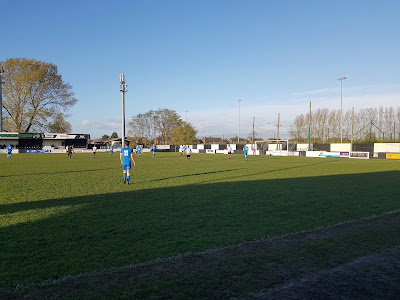 The northern side is dominated by the largest capacity stand in the venue extending for most of the length of the pitch. This stand has three rows of seating able to hold around 250 spectators and has a small section at either end with no seating where fans can stand and watch the game while covered. The two ends are similar with flat concrete uncovered standing by the goals with grass areas behind. There is also a snack outlet in the south-west corner. 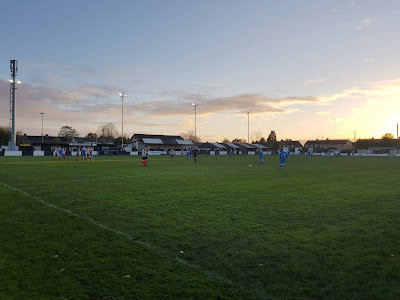 Brigg had enjoyed a positive start to the season with the hosts go into the game in 3rd in the table. Armthorpe on the other hand had struggled thus far and were down in 17th. Initially the play seemed to be going the way of the formbook when in the 6th minute a clipped cross from the left byline from Martin Pembleton was glanced off the goal line by Armthorpe defender Robbie Watson. In the 9th minute though the visitors took the lead in fortuitous circumstances. It came about when James Arnold lofted a free-kick from the right wing which flew over everyone into the top corner of the net. It was certainly intended to be a cross but it didn't matter to Armthorpe as they celebrated the opening goal. Brigg tried to restore parity five minutes later when the ball broke to Paul Sherbern who squared to Luke Williams. With just the keeper to slot past Williams managed to drag his shot just wide of the post. That miss proved costly as the away side went two goals to the good in the 22nd minute - it was another set piece as a corner from the right was met by Lee McFadden who steered his header into the far corner over the diving Patrick Shaw. Brigg had the better of the second quarter of the game and went closest in the 25th minute when a close range header was tipped over by Armthorpe goalie Connor Trueman. The away side were well organised defensively and made the hosts wait until nine minutes into the second half to finally make their breakthrough - it took some nice link-up play on the edge of the box before the ball was passed out to Alfie Usher who sidefooted low past Trueman into the bottom corner. The end-to-end contest continued as three minutes later Armthorpe were denied by the crossbar from Luke Williams' dipping free-kick. It was back down the other end five minutes later as Brigg were awarded an indirect free-kick in the area after away goalie Trueman picked up a backpass. The effort was blocked on the line and after a mad scramble the ball was put was put behind for a corner. The home side's hopes of getting level then took two blows in the space of two minutes. Firstly they were reduced to ten men in the 70th minute when Wayne Graves received a second yellow card for a late tackle on Adam Baskerville. 60 seconds later Baskerville was at the centre of the action again as Luke Williams picked up the ball on the edge of the area, neatly laid off a backhell to Baskerville who curled a sumptuous curling shot past the keeper from 20 yards. Still the contest wasn't over and the fifth goal of the game arrived just three minutes after this as Reece Newell got Brigg back within a single goal again. The home side kept persevering and in the final minute of the ninety a long ball over the top found Jamie Osbourne who scooped the ball just over the crossbar. After a few minutes injury time the referee blew time on a terrific contest - which turned out to be the last action before the season was put on hold as the nation went into another period of lockdown. 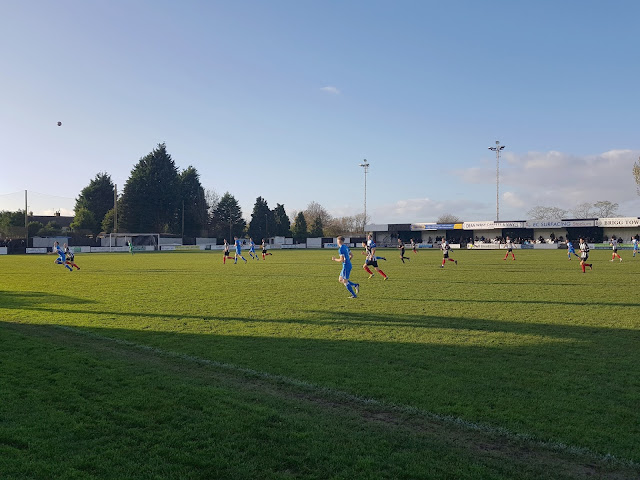