My thirteenth new ground of 2012 was on Wednesday 1st August at the Millennium Stadium in Cardiff, Wales. The matches were Mexico vs. Switzerland & Great Britain vs. Uruguay in the 2012 Olympic Football Tournament.

The Millennium Stadium is located in Cardiff city centre just a few hundred yards from Cardiff Central railway station. The stadium was built in 1999 and is the Welsh national stadium, home to the Wales rugby union team and the Wales national football team for high profile games. The stadium also hosts the British Speedway Grand Prix and various other events including concerts. 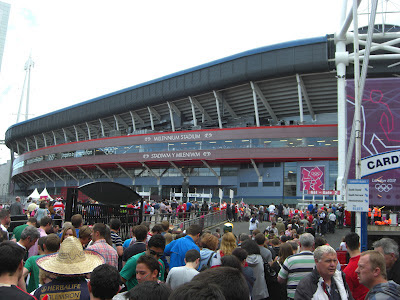 This was not a new stadium for me as I visited it previously on 25th June 2011 to see the British Speedway Grand Prix. However, as I was seeing football in the venue for the first time I felt it deserved a re-post although some of the information here will be recycled from my earlier post. The stadium was chosen along with five others to host the men's and women's football tournament for the London 2012 Olympics with a total of 10 games taking place at the venue during the tournament. 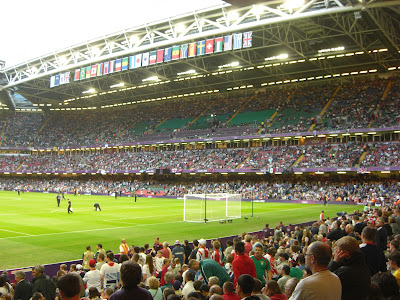 The Millennium Stadium has three tiers of varying capacities with the upper tier seating 33,000, the middle tier seating 18,000 with the lower tier seating 23,500 to give an overall stadium capacity of 74,500. The venue forms a bowl shape most of the way round with the North Stand differing from the others stand in only having two tiers. This is because the stadium is adjoined at this end to the South Stand of the adjacent Cardiff Arms Park Stadium. Stadium chiefs are hoping to rectify this issue in the future as bringing the North Stand into line with the other stands would increase capacity to around 80,000. I watched the action from the the back of the lower tier in the North Stand which because of the overhang of the stand above did not give a great view of the stadium itself though views of the field of play were fine. 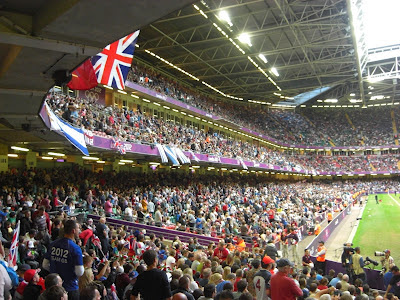 The first game saw a Group B tie between Mexico and Switzerland. Going into the action Mexico needed a draw to progress to the quarter-finals with the Swiss having to win to have any hope of advancing. The two teams played out a dismal opening 45 minutes and the slow, lethargic football failed to rouse the crowd. The closest the first half got to a goal was just before the interval when Giovani dos Santos shot straight at the Switzerland goalkeeper from the edge of the box. The second period was slightly better with Mexico pushing at the Swiss goal with a couple of early shots. In the 69th minute the deadlock was broken when a neat Mexican passing move culminated in Oribe Peralta shooting the ball between the goalkeeper's legs from 12 yards out. Mexico looked the better team after this and near the end of proceedings almost doubled their advantage when a long-range Israel Jimenez shot was tipped onto the bar by the Swiss goalkeeper. This kept the score at 1-0 which is how it finished.

The second game saw a Group A tie between Great Britain and Uruguay. The hosts needed only a draw to go through with Uruguay having to win if they wanted to continue in the competition. Great Britain started the brighter with Craig Bellamy causing the Uruguayans real problems down the right wing. They were however, unable to really trouble the goal in the opening spell. Uruguay had a couple of attacks against Great Britain but were often limited to wayward shots from long range. In first-half injury time Great Britain took the lead as Joe Allen sent the ball into the six-yard box for Daniel Sturridge to slide it into the net. After the break the visitors had a golden opportunity to score when Luis Suarez broke into the box and from only a few yards out shot straight at goalkeeper Jack Butland. Not long after Butland was again called into action to deny a Suarez shot across goal with a good save as Uruguay continued to be frustrated. It was simply not the Uruguayans' night and in the 94th minute a superb Gaston Ramirez shot came back off the crossbar as they tried in vain to get the ball in the back of the net. Shortly after the final whistle blew with Great Britain advancing to the quarter-finals with the 1-0 win. 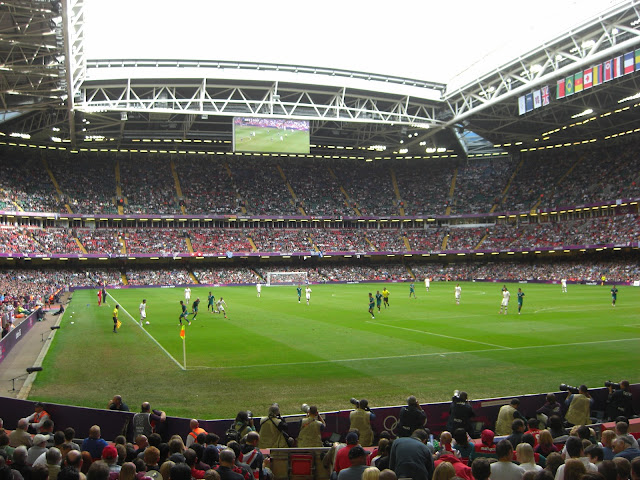