My seventh new ground of 2013 was on Saturday 30th March at Hillsborough Stadium in Sheffield, South Yorkshire. The match was Sheffield Wednesday vs. Barnsley in the Football League Championship.

Hillsborough Stadium is in the north of the city of Sheffield in a built-up residential area. The venue is 3 miles from Sheffield railway station in the city centre but only a few hundred yards from the Leppings Lane tram stop. It has been the home of Sheffield Wednesday since 1899. 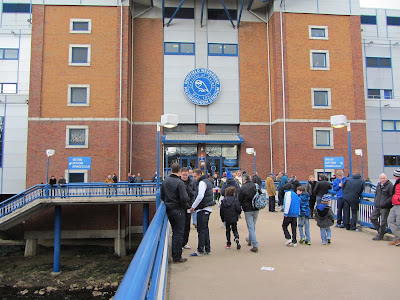 The largest stand in the venue is the South Stand which is made up of a large lower tier and smaller upper tier. The lower tier holds 8,275 seats with the upper tier holding 3,077 making a total capacity of 11,352. The main reception area is positioned at the front of this stand with media, hospitality and executive boxes also contained within. Just outside the South Stand entrance gates there is a memorial to the 96 Liverpool fans who lost their lives during the F.A. Cup Semi-Final disaster in 1989. Opposite the South Stand is the North Stand, a large single-tiered structure with room for 9,255 fans. The club shop sits adjacent to this stand. Unlike the other two stands in the ground neither the North or South stands have supporting pillars to obstruct views. 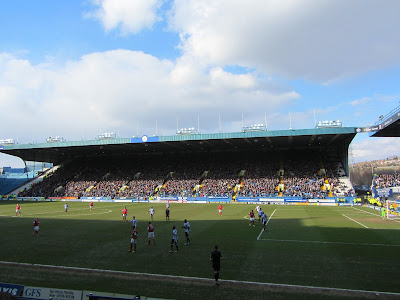 The Spion Kop sits behind the goal at the eastern end of the ground and is a single-tiered 11,210 seat structure reserved for the most vocal home fans. It is an impressive sight though two large supporting pillars towards the centre of the stand will cause some view restriction to those behind them. Part of the Kop includes a small 400 seat section at its northern end which facing inwards towards the rest of the stand. At the western end of the pitch is the Leppings Lane End. With a lower tier of 2,494 seats and an upper tier of 4,164 seats the 6,568 capacity stand is the smallest in the ground and is usually given to away fans. The are several supporting pillars across the two tiers in this stand. Adjacent to this is the North West Corner, a rarely used 1,337 seat uncovered section. If the venue is upgraded in the coming years there are plans to put a roof over this section. 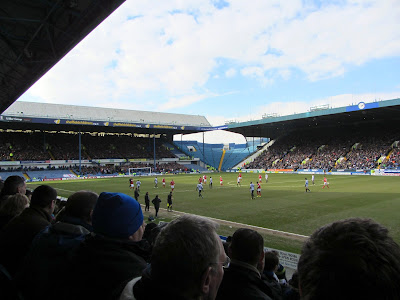 The game wasn't a good spectacle in the first half with both sides struggling. Leroy Lita put the ball in the back of the net for the home side in the opening five minutes only for it to be ruled out for offisde. After this it was Barnsley who started causing difficulties for the home defence with a good spell of pressure. Wednesday were limited to occasional counter-attacks during a first 45 minutes where they rarely brought the visiting goalkeeper Luke Steele into action. The second half was an improvement on the first and the visitors continued to go on the attack. On the hour mark a 25-yard effort from Rueben Noble-Lazarus produced a good save from Chris Kirkland in the home goal. Just after this it was the hosts who took the lead after Lewis Buxton snuck in behind the Barnsley defence and his low cross into the box was met by Gary Madine who couldn't miss from a couple of yards out. This gave Wednesday confidence to go after the Barnsley defence and in the 76th minute poor marking saw Reda Johnson left unopposed to head in a free-kick to make it 2-0. In the 83rd minute Gary Madine had a chance to wrap up the match from the penalty spot after the referee claimed to have seen a handball. It seemed a dubious decision and with Madine shooting wide of the target the visitors knew there was still time for a comeback. Wednesday were reduced to ten men when Lewis Buxton received his second yellow card in the 86th minute and in injury time Marlon Harewood set-up Jacob Mellis to strike the ball into the bottom corner to generate a nervy finish in the remaining six minutes of play. The away side couldn't quite snatch an equaliser in the time left so Sheffield Wednesday finished the match as 2-1 victors. 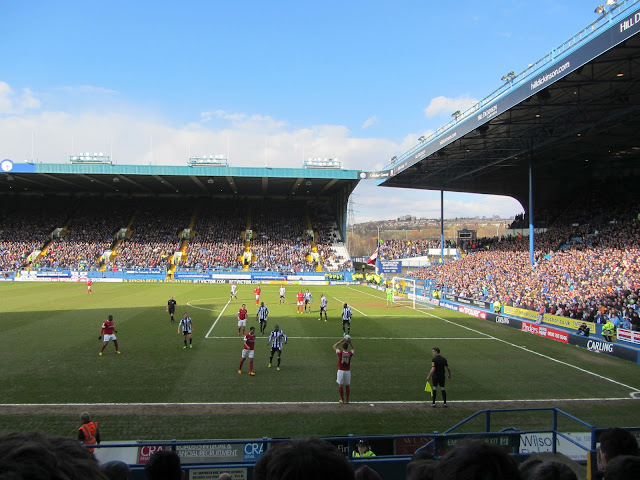