My forty-fifth new ground of 2019 was on Saturday 24th August at Roker Park in Stotfold, Bedfordshire. The match was Stotfold vs. Canvey Island in the F.A. Cup Preliminary Qualifying Round.

Roker Park was on the north-east tip of the town of Stotfold. Bordered by housing on three sides there was a small sports park to the east which had tennis courts and a skate park. The nearest railway station was in the neighbouring town of Arlesey 2.5 miles due west. The venue became home to the club in 1965 when they departed the Hitchin Recreation Ground and the club left Roker Park to move to a new stadium which the same name in 2020. 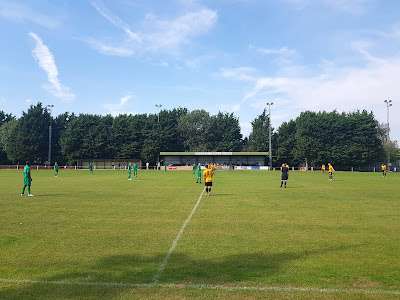 The Bill Clegg Stand was the main one in the venue and sat level with the half-way line on the northern side of Roker Park. The stand was an all-seater one with a capacity of 143. To the west of this was a covered standing area slightly raised above the concrete strip in front. This small stand was a mixture of wood and corrugated iron with a concrete platform. The area to the east of the stand was not accessible to spectators due to encroachment from trees and a floodlight poll. 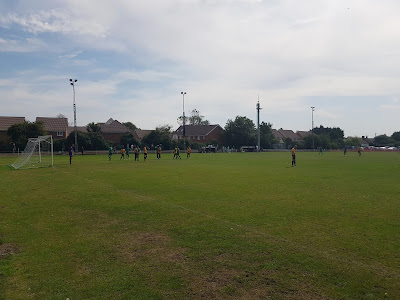 The southern side was uncovered sloped asphalt for its whole length. This was fairly slim due to space constraints and the two dugouts were also on this side. The eastern side also had no structures with a strip of hard standing in front of a gentle grass bank with a decent sized flat grass area at the back. Finally the western end had a strip of concrete behind the goal with a car park behind. The north-west corner played home to the clubhouse, a food outlet and player and officials dressing rooms. 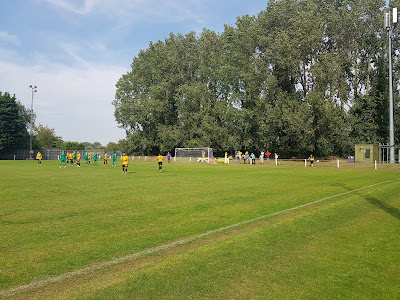 This F.A. Cup Preliminary Qualifying Round pitted Spartan South Midlands League Division One side Stotfold against Isthmian League North Division side Canvey Island. The visitors from the 8th tier were entering the competition at this stage while it was the second game for Stofold who overcame Harpenden Town 3-1 in the Extra Preliminary Qualifying Round. The away side were unsurprisingly the stronger early on and carved out the best chance in the 17th minute when Tobi Joseph beat a defender on the left side of the area and drilled a fierce shot at Stotfold keeper Liam Gooch. In the 29th minute Joseph was involved again when a bit of trickery on the edge of the box saw him beat one defender before contact was made with a second Stotfold player. Joseph went down and a soft penalty was awarded. George Purcell was on spot kick duties but his weak effort was saved and held easily by Gooch to keep the game goalless. Four minutes after this another chance fell to Tobi Joseph when he met Jason Hallett's square ball and saw his close range effort saved by Gooch. The best play from the hosts came in the 36th minute when a long ball up to Daril Ngwala saw him lob Canvey goalie Lamar Johnson from 25 yards - as the ball was sailing through the air the whistle was blown as the referee spotted the lineman's offside flag raised. Stotfold were looking like keeping Canvey out until half-time but in the 42nd minute the breakthrough came. Canvey dangerman Tobi Joseph did well down the right to beat a defender and cross low into the box where the ball deflected in off Stotfold's Tommy Carroll. Canvey remained the better side in the second period but were making heavy work of the tie on a very warm day. Goal number two arrived in the 72nd minute - Dan Humphreys unleashed a strong 25 yard effort which crashed off the underside of the bar. As the ball bounced up who else but Tobi Joseph was there to nod into an empty net. The away side considered their job down at this point as though they were happy for Stotfold to have plenty of possession they were sufficiently tight at the back to never really look threatened. 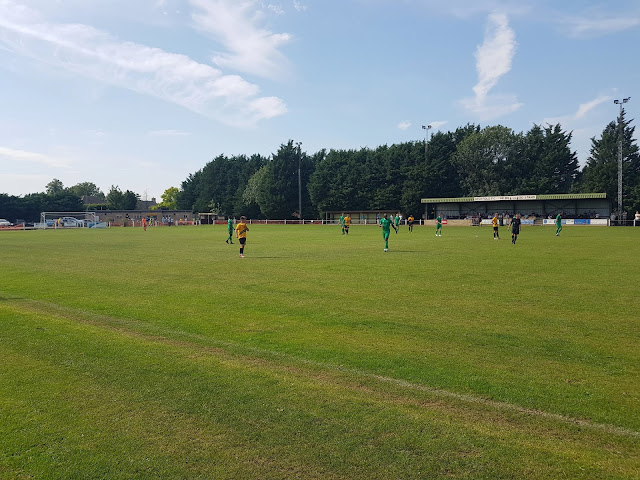