My twentieth new ground of 2012 was on Saturday 13th October at Edgeley Park in Stockport, Greater Manchester. The match was Stockport County vs. Kidderminster Harriers in Conference National.

Edgeley Park is located near the centre of Stockport, around half a mile from the town's railway station. It is surrounded by a combination of housing, a small park and the railway line. It was built in 1901 and has been home to the club since the following year. 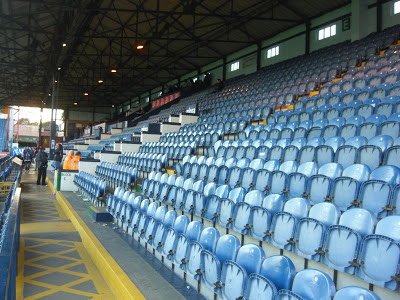 The Main Stand runs along the northern side of the ground, though not for the entire length of the pitch. It has a capacity of 2,020 including an executive area and also contains the players dressing rooms. This stand has three supporting stanchions - one at either end and one down the middle. This causes restricted for a small number of fans in the structure. Opposite this is the 2,411 capacity Popular Side stand. Unlike the Main Stand this does run the full length of the pitch although the seats do not go as far up into the back of the stand. The Popular Side has half a dozen supporting beams as well as the television gantry. 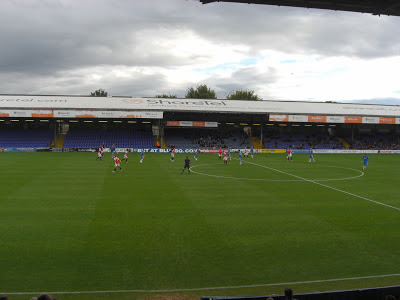 The smallest stand in the ground sits behind the goal at the eastern end of the venue. The Railway Stand can hold 1,366 fans and is usually allocated to away fans. The stand is uncovered so fans in the stand are fully open to the elements. Behind the goal at the northern end of the ground is the largest stand - the Cheadle End. With a capacity of 5,044, this two-tier structure accounts for nearly half of the stadium's capacity. It opened in 1995 and also features many of the club facilities including the ticket office and executive boxes. The game was between two sides towards the wrong end of the Conference table and both sides had decent spells of play with no real end product to show for it. In the 43rd minute the home side were awarded a penalty for a clumsy tackle in the area. Sean Newton stepped up and coolly slotted into the net to give Stockport the lead. Kidderminster almost equalised straight from the subsequent kick-off as Anthony Malbon's long-range effort was pushed onto the post by Ian Ormson in the Stockport goal. The second half witnessed period of domination from the hosts with the away side limited to occasional counter-attacks. Nathan Vaughan put in a superb performance in the Kidderminster goal and a string of saves kept Stockport out. For their part the visitors did look dangerous when they got onto the attack but these attacks were few and far between as the home side played some good passing football. As the game drew to a close the tables were turned as Stockport went onto the back foot and the visitors tried to grab a point from the match. However, it wasn't to be and Stockport triumphed by a single goal. 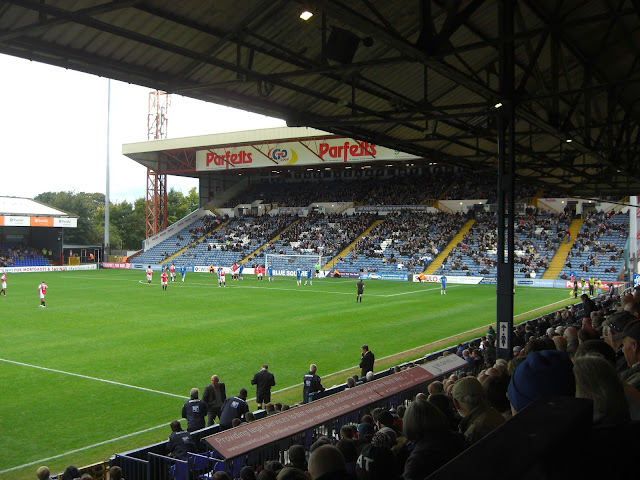