My thirty-second new ground of 2011 was on Wednesday 11th May at Kingsmeadow in Norbiton, London. The match was AFC Wimbledon vs. Fleetwood Town in the Conference National Play-Off Semi-Final.

Kingsmeadow (currently known as the Cherry Red Records Fans' Stadium) is located 1 mile from Norbiton railway station. The stadium is owned by AFC Wimbledon who purchased it in 2003 though the ground is also shared by Isthmian League Premier Division side Kingstonian who have played at the venue since it was built in 1989. 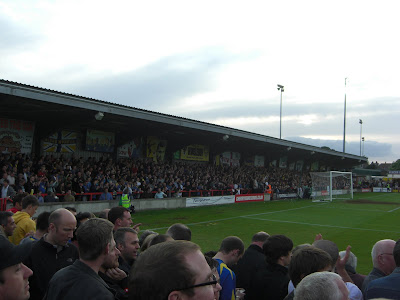 When I visited the ground had just one all-seater stand - the Paul Strank Stand which is a fairly slim stand on the west side of the venue capable of holding 1,265 fans. Since my visit the narrow Kingston Road End has been changed from terracing to an all-seater stand with a capacity of around 1,000. There are two terraced sections which remain - the Tempest End is a steep terrace where the majority of the most passionate Wimbledon fans watch from, putting up their dramatic banners across the whole of the back wall. The other terrace is the John Smiths' Stand which is a shallower stand which extends along the length of the east side of the pitch and was where I watch the game from. 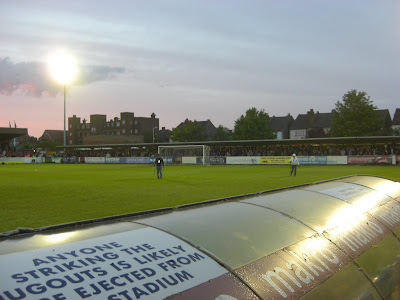 With the game a sell-out, the ground was stretched to capacity and it did experience some issues. I arrived half an hour before kick-off but the place was already heaving. With just one ticket collection window at the venue, all the fans picking up their entries had to queue in a single line meaning a wait of around 20 minutes to collect my ticket. When inside the ground was completely packed and with the terracing very shallow in the John Smiths' Stand, taller people blocked my view and I could probably see only about 20% of the pitch through the sea of heads. I moved around several times in an attempt to see the actual game but it was not until the second half that I was able to get a decent vantage point. In addition, it took 15 minutes to get out of the ground because of the lack of exits. If AFC Wimbledon's meteoric rise through the leagues continues, the club may have to revisit stadium facilities as in my view it will not be able to adequately cope with full gates on a regular basis. 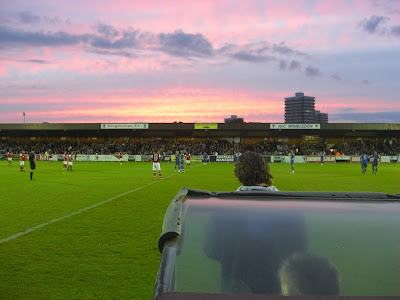 The game itself was a highly enjoyable one. Leading 2-0 from the first leg, it took AFC Wimbledon just 27 seconds to score the night's opener. Two more goals around the half-hour mark saw them lead 3-0 at the break. Fleetwood bundled in a consolation a minute after the restart and proceeded to put the Dons under a spell of concerted pressure. However, a 4th goal for the home side brought the home fans mood back up and a 5th goal quickly followed. A 6th goal was added with around 10 minutes remaining to finish off a rampant 6-1 victory on the night, securing an 8-1 aggregate win. The AFC Wimbledon fans who had created a terrific atmosphere for the evening were in a party mood and celebrated as the players did their lap of honour after the final whistle. 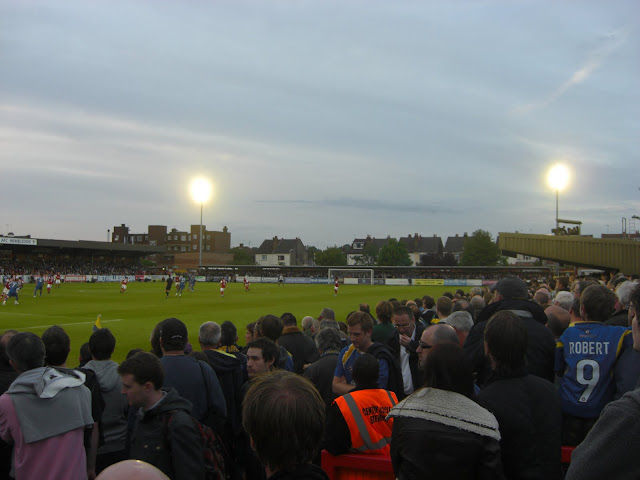