My thirty-third new ground of 2019 was on Wednesday 8th May at Guy's Meadow in Cumbernauld, North Lanarkshire, Scotland. The match was Cumbernauld United vs. Arthurlie in the West of Scotland Championship.

Guy's Meadow is located in the north-east of Cumbernauld in the 'village' area of the town just south of the M80 motorway. The complex is bordered by woods to the west and south, housing to the east and to the north is a road with a river at the side of it. The venue is a 2.5 mile walk from Cumbernauld railway station and has been home to the club since 1974. 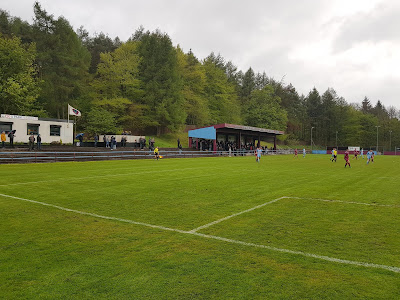 The southern side of the ground has an eleven level concrete terrace for its whole duration. Unusually it continues beyond the western end of the pitch for quite some distance. This side has a covered section in the middle with uncovered sections either side. At the back of the terracing in the south-east corner is a snack bar and a surprisingly nice clubhouse and bar. There is then a separate designated smoking area in a garden-esque structure at the very back of this. 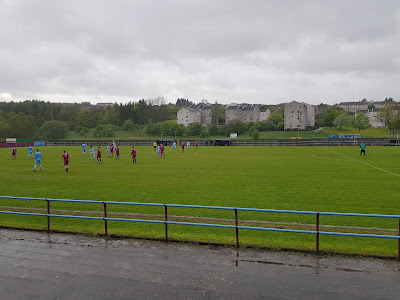 The only other side with spectator facilities is the eastern end. Leading through car park and into the entrance turnstiles this end has an uncovered hard standing walkway for most of its length. There is a dressing room building in the north-east corner but spectators are barred from standing near this. Behind this end is an artificial cage pitch. The ground is only effectively only a one and three-quarter side affair with the northern and western end off limits. The northern side has the two dugours while the western end has four artificial mini pitches behind the goal. Another slightly unusual feature is that the artificial pitches at either end are floodlit but the main pitch is not. 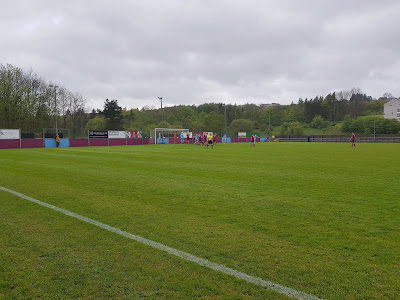 The match was a battle for the final Championship promotion place with the sides in 4th and 3rd respectively ahead of the evening's tie. There was a goal almost instantly as Arthurlie netted with barely 100 seconds on the clock. A corner found Liam Mushet who saw his shot blocked on the line. However the ball kept bouncing around the danger zone with James Marks managing to tuck away from close range. Cumbernauld were behind for only nine minutes though when Kieran McAleennan cutting inside the area before curling a great shot into the far corner of the net from 15 yards. The hosts had the better of the first half going close in the 22nd minute as Connor Stephenson's hard 25 yard effort was tipped over by the keeper. It was little surprise to see thr home side take the lead just three minutes after this - a through ball to Connor Scullion beat the offside trap allowing him time to stroke past the keeper with ease. Cumbernauld could have gone in two goals to the good but Connor Stevenson headed over Paddy McCabe's whipped cross six minutes before the break. After the interval the pattern continued with Scullion doing well initially to nick the ball off a defender after his misjudged a bounce in the six yard box. He then snatched at his shot and dragged it wide. In the 68th minute Arthurlie unexpectedly equalised - after great work down the left the ball was crossed in and headed towards goal. The home keeper then suffered a howler as he allowed it to slip through his legs and over the line. The pendulum now appeared to be swinging back to Arthurlie and with 14 minuted left a cross into the Cumbernauld box caused consternation between defenders and keeper with the ball just staying out. There was then a frenetic end to the proceedings with Cumbernauld being awarded a 90th minute penalty after the keeper brought down an attacker. Tony Stevenson went to the goalie's right and saw his shot saved. Then at the death Arthurlie nearly pinched it when a free-kick was floated in, an away attacker slid in and the keeper saved on the line to restrict both sides to a point. 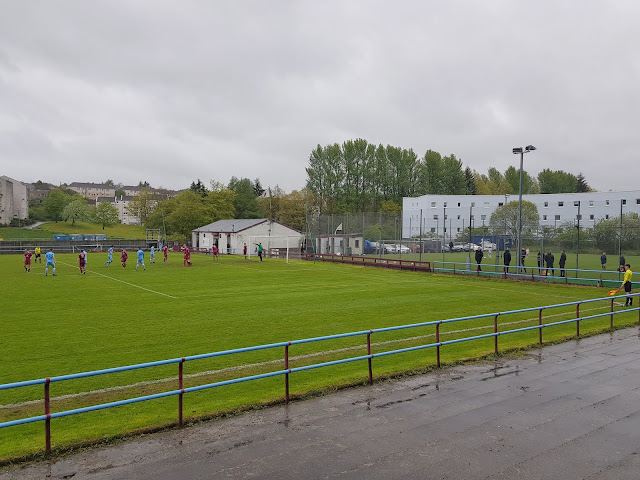