My forty-ninth new ground of 2019 was on Saturday 5th October at Trowbridge Road in Bradford-on-Avon, Wiltshire. The match was Bradford Town vs. Clevedon Town in the Western League Premier Division.

Trowbridge Road is in a residential area in the south of the town. The ground is part of the Bradford-on-Avon Sports & Social Club also containing a table tennis club and bowls club. These lie at the north-west end of the pitch with an additional grass area on its south-west flank. The north-eastern side links into Trowbridge Road itself while the south-eastern end is bordered by housing. The venue is half a mile south-east of Bradford-on-Avon railway station and has been home to the club since 1996. 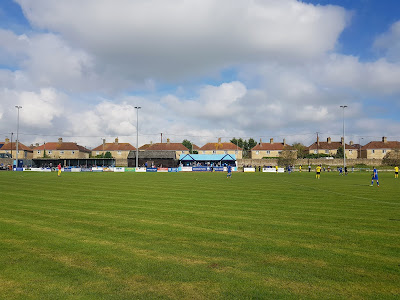 Entrance to the ground is in the northern corner and in this corner is a covered four-level concrete terrace area. Next to this is an all-seater stand with around 100 seats and then a couple of older looking disused buildings in club colours. Working down the north-east flank there is then uncovered hard standing with a grass bank behind. 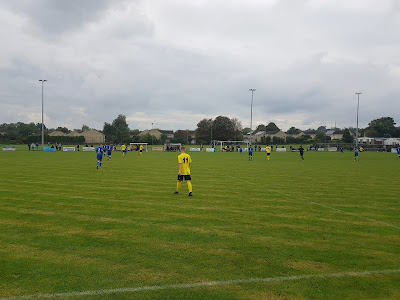 The south-west side is uncovered with a strip of concrete and then a vast grass area which can be used as an additional pitch. The two dugouts are on this side of the field. The south-eastern end is the most constrained on space so just has a hard standing area with a small grass section separating it from the trees on the site boundary. The north-western end has the club infrastructure which shipping containers doubling as dressing rooms and a food outlet. In front of this is a mixture of concrete and grass viewing areas and the car park. Behind the shipping containers is the pathway to the bowls club which doubles as the football clubhouse. 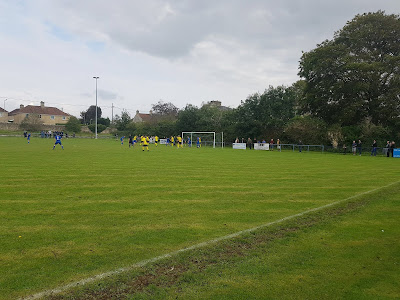 Both sides had enjoyed good starts with Bradford up in 2nd place and Clevedon only two spots behind them in the standings. The hosts had the best opportunity of a quiet first half an hour - it came in the 18th minute when a ball to the back post found Tyson Pollard who sent it across the face of goal and Neikell Plummer was just unable to get a foot on it when any kind of contact would have put Bradford 1-0 up. Clevedon's chance came in the 35th minute when Lucas Vowles zipped a ball across the area to Zach Drew who shot from close range and saw his effort saved well. Then in the 39th minute Bradford went in front. Clevedon failed to clear an attack and the ball fell to Tyson Pollard who struck a 20 yard shot into the corner of the net. It was almost 2-0 just before the interval which came about during a scramble in the away box as a deflected Bradford shot went just over the bar. Into the second half and Bradford were again on top - in the 58th minute Sean Keet's header was blocked on the line and five minutes after this Lewis Ellington missed a guilt-edged chance when he headed wide from Pollard's cross. Some home fans were already celebrating as it looked like a sure goal but their frustration was shortlived. In the 68th minute a cross from the left was dropped by Clevedon keeper Mike Dangerfield and Lee Davidson's shot was handled on the line resulting in a penalty. Tyson Pollard sent the penalty low to Dangerfield's right to grab his second goal of the afternoon. The hosts continued to try and extend their lead and in the 73rd minute could have gone three-up - Pollard was in the mix as usual as he controlled well and squared for Lewis Ellington who got the ball stuck under his feet with the goal gaping allowing a defender to tackle him. The final meaningful chance came in the 78th minute when Bradford's Lewis Powell headed a corner just wide of the post. After this the hosts were happy to control the game and ride out a pretty comfortable victory to remain right in the title race at this early stage of the season. 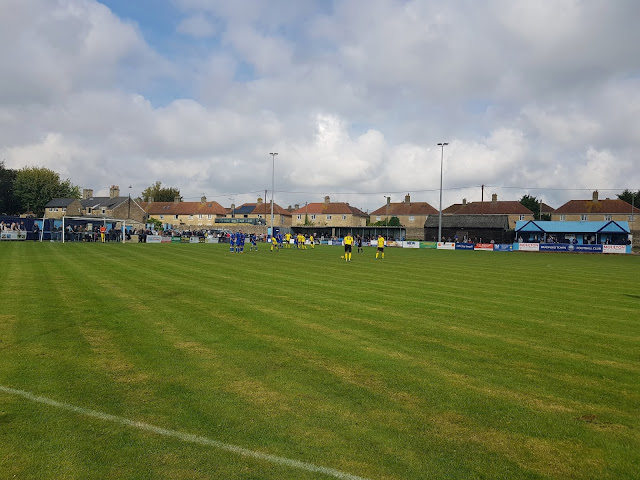