My second new ground of 2018 was on Saturday 24th February at Goff's Lane in Cheshunt, Hertfordshire. The match was Broxbourne Borough vs. Broadfields United in Spartan South Midlands League Division One.

Goff's Lane is located in the west of Cheshunt a few miles south of Broxbourne itself. The football ground takes up a small section of a larger parcel of land which breaks up the residential sprawl of the area. The main occupants of the site are a school with the football club bordering its western side. To the south of the arena there are additional pitches with roads to the north and west. The ground is a couple of miles west of Cheshunt railway station and has been home to Broxbourne Borough and its predecessors since 1975. 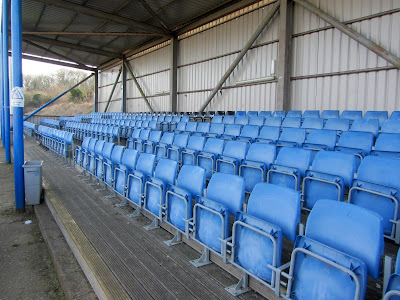 The northern side of Goff's Lane includes the club buildings outside of the football arena. Adjacent to the care park are the clubhouse, changing rooms and a small committee building. The entrance turnstile is located at the end of the car park and emerges in the middle of a covered wooden stand which takes up most of this end. This stand consists of a total of 131 seats split into three sections - 37 seats on the right-hand side of the entrance, 71 seats on the left-hand side of the entrance and 23 seats in the north-east corner for directors and officials. This stand continues round the corner before finishing around one-third of the way down the eastern side of the ground. This eastern section is a wooden terrace which has 2 levels initially before slimming down to a single level as the neighbouring artificial pitch encroaches upon the football arena. 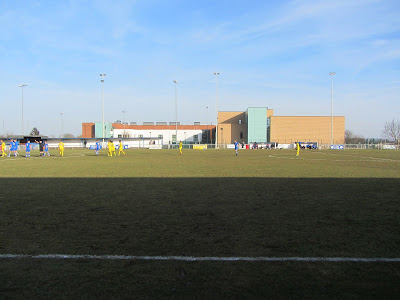 The rest of this side is uncovered standing with the only other thing of note being the two dugouts. This uncovered standing continues at the southern end of the ground where space is at premium due to more neighbouring pitches. The western side has the only other stand in the venue - this large all-seater structure sits by the half-way line. It has 214 seats across 5 rows but has a very high roof requiring 5 supporting beams to hold it up. Apart from this stand the western side is a bit messy and overgrown with a few cordoned off areas. Upon my visit there was a food outlet vehicle near the stand but this was not open during the game. Aside from the stand it is uncovered standing with plenty of space either side of it. This uncovered standing continues round to the area behind the goal at the northern end until it meets the start of the seating area. 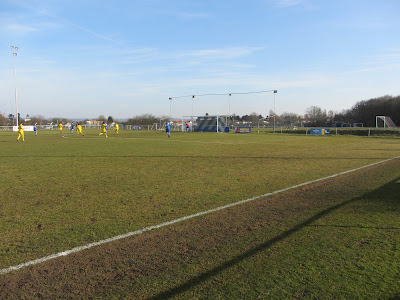 There was a clear gulf between the sides in the league table with the visitors twelve spots above the home side at kick-off. Broadfields had the upper hand early on with a succession of corners in the opening minutes though these came to nothing. In an extremely poor half of football there was very little action bar a scramble by the Broxbourne goal just after the half-hour mark. The first meaningful event came in the 41st minute when Broadfields were awarded a penalty after an attacker was struck in the face when a home defender went to head the ball. Harry Henley was the man on duty to take the spot kick and his effort found the goal despite the keeper getting a hand to it on the way in. The away side doubled their lead in the 53rd minute - a forward rode a defender's challenge before his attempt to round the goalie saw the ball palmed away. Fortunately for Broadfields this diversion found its way to a winger who slotted into the empty net as Broxbourne appealed for offside. The home side's best chance came in the 65th minute when a midfielder broke into the area and shot straight at the keeper from close range. Within ten minutes the visitors found themselves 3-0 up as a winger picked up the ball on the edge of the area and managed to get a shot low away as a tackle sent him flying. The shot snuck past the goalkeeper into the bottom corner. Broadfields were cruising by this point and rounded off the scoring in the 82nd minute when Harry Henley grabbed his second. It came about when he gathered the ball on the right, advanced towards the area and shot from 20 yards with the ball bobbling over the diving keeper. 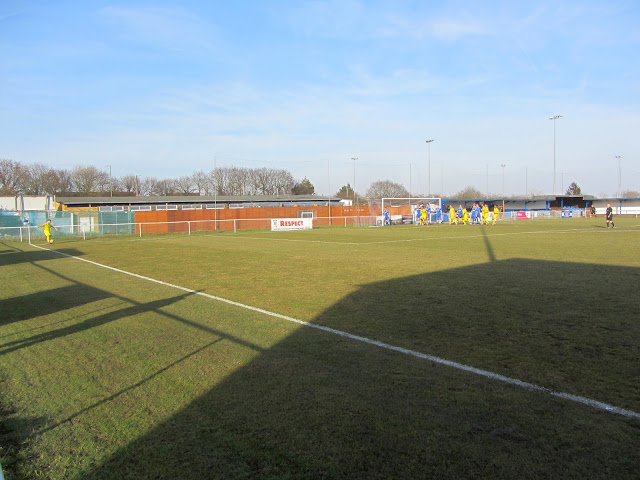