My twenty-ninth new ground of 2019 was on Thursday 25th April at Gillford Park in Carlisle, Cumbria. The match was Carlisle City vs. Cleator Moor Celtic in the North West Counties League Division One North.

Gillford Park lies in the south of the city sandwiched between the River Petterill to the east and the West Coast Main Line with trains passing by on the London to Glasgow route. A second full-size pitch borders the northern wing of the ground with trees beyond this while their neighbours to the south are the British Railways Staff Association Club. 2 miles south-east of Carlisle railway station the venue has only been home to the club since 2015 when they took over the lease from Celtic Nation FC who had played there between 2004-2015. 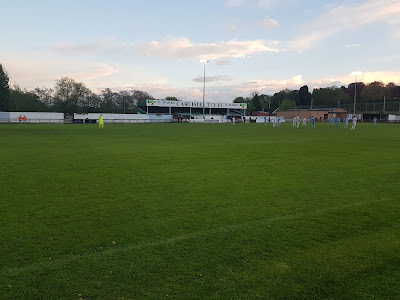 The southern flank has a stand by the halfway line which is raised above ground level. It consists of an eight level concrete terrace with eight rows of seating bolted onto three-quarters of it. The remaining quarter is supposed to be out of use with a 'No Standing' sign in place at the back of the structure, not that anyone was paying attention to it. The stand has a seating capacity of 336 and the low roof ensures it is well shielded from the elements albeit with not the best views at the venue. In front of this stand are the two dugouts and either side of it is uncovered hard standing. 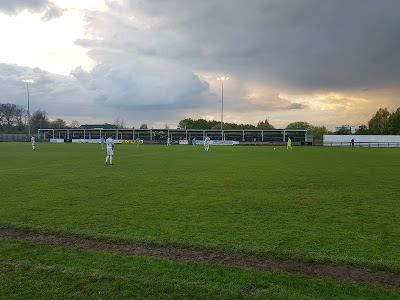 The northern side of Gillford Park has an uncovered hard standing section towards the eastern end but a long stand makes up the rest. This stand is a four level concrete terrace with a flat concrete area in front. The stand is entirely covered with multiple beams holding up the roof in front of the viewing area. The western end has a 191 seat stand with the players tunnel splitting the seating. At the top of the stand are the committee rooms and with the high roof sloping upwards the seating deck is covered but with no view restrictions from roof beams. The stand is bookmarked by uncovered hard standing and there is a food outlet in the south-west corner. The eastern end is the only end with no stand - it is the most space restricted zone of Gillford Park so just has uncovered hard standing for the width of the pitch. 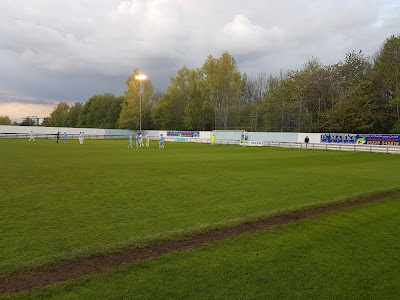 With the league season concluding two days later this match-up was being squeezed in at the last opportunity to get the season finished. However with the sides sitting in 6th and 11th respectively there were very little at stake. The game nearly saw an early goal as James Earl got in behind the defence on the right-hand side, paused for a moment waiting for an offside flag that never came, before restarting his run on goal. This gave visiting keeper Craig Devine time to close him down and save his effort when it was eventually made. Four minutes later the home side wasted another terrific opening when two Cleator defenders collided opening the way for Jordan Palmer who shot straight at Devine. Cleator were not without their own opportunities - in the 13th minute a long throw was missed by keeper Stephen Townsley resulting in the ball bouncing along the goal line and out of play. More chances went begging as the half progressed, in the 23rd minute Carlisle's Robert McCartney beat the offside trap and with all the time in the world to knock past the keeper managed to chip it wide to the exasperation of his teammates. Ten minutes before the interval a home free-kick from Sam Atkinson was also heading for the roof of the net until Craig Devine stepped up and tipped over the bar. The home side will have been wondering how it was goalless at half-time and after the break the game continued in a similar fashion with Carlisle knocking on the door but poor finishing letting them down. The breakthrough finally came in the 68th minute with a move from one end of the pitch to the other culminating in Robert McCartney getting in behind the defence again and this time he made no mistake in tucking the ball into the bottom corner past Devine who raced out to meet him. McCartney could then consider himself unlucky not to grab a 2nd in the 73rd minute when he brilliantly controlled a long ball on his chest and volleyed inches over the bar. Within 60 seconds though Carlisle were two-up - a cross to the far side of the area found Jordan Palmer who nodded the ball down and David Reynard smashed the ball into top corner from close range. As the game ticked over into injury time a third goal arrived when Aaron Bradbury picked up the ball outside area, rode a challenge and took a fairly tame shot at goal. Unfortunately Devine misjudged it with the ball squirmed past him into bottom corner. A minute later the home side were a whisker away from adding a fourth to their total - a long ball found Robert McCartney who cut inside and shot across goal only to see his effort come back off the post. 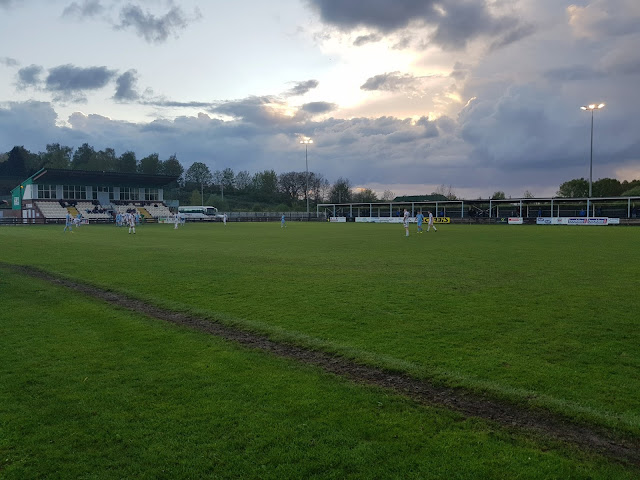