My thirty-sixth new ground of 2019 was on Saturday 11th May at Caledonian Stadium in Inverness, Invernessshire, Scotland. The match was Inverness Caledonian Thistle vs. Ayr United in the Scottish Premiership Play-Off Quarter-Final.

Caledonian Stadium sits in the shadow of the A9 road bridge on the banks of the Moray Firth. The only neighbour to the club is a caravan site to the south with the ground next to the bridge to the west and water on the remaining two sides. The venue is 1.5 miles north-east of Inverness railway station and became home to the club in 1996 a couple of years after its creation through the merger of Caledonian and Inverness Thistle. 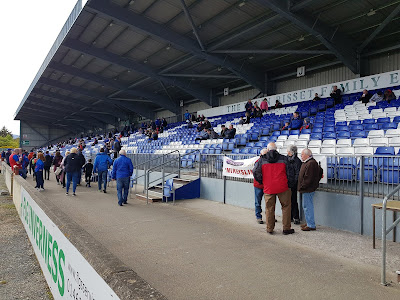 The Main Stand dominates the ground running the length of its eastern side. The stand has a large covered middle section with two tiers which has hospitality areas along the back. The interior of the stand houses the reception, players and officials entrances, ticket office, a small club shop and the ICT Family Sports Bar. The lower tier continues either side of the middle section with these uncovered ends giving the stand a somewhat unusual wing-like design. 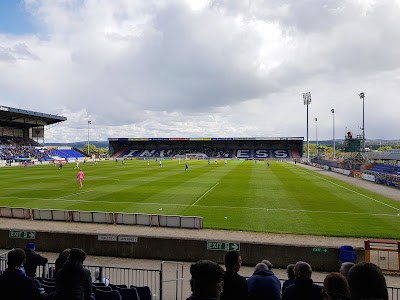 The opposite side of the field is distinctly less expansive - known as The Open Terrace this side was previously a thin uncovered concrete terrace. With the stadium's subsequent conversion to an all-seater venue this fell by the way side and now its only use is as a foundation for a 400 capacity uncovered seating area. It's primary purpose is to provide food outlets and toilets for the North Stand as well as the spot for the TV gantry. The North Stand and South Stand began life as uncovered concrete terraces but when the club were promoted to the top flight they failed seating capacity requirements forcing them to play at Aberdeen's Pittodrie Stadium some 100 miles down the road. In January 2005 work to convert them to covered all-seater stands was completed allowing Premiership football to be hosted for the first time. The northern end is used by home supporters and has a large car park behind it. The opposite end is provided to away fans with a smaller car park behind it. 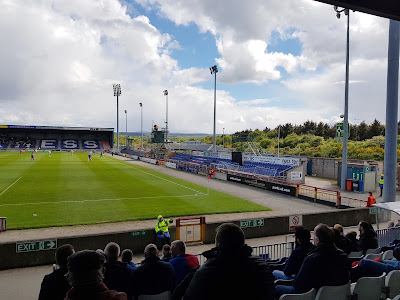 This was the second leg of the play-off quarter-final to try and gain promotion into the Premiership. Inverness were in a commanding position having won 3-1 at Somerset Park in the first leg. Their aggregate lead was cut to one in the 20th minute when Ayr netted. A good ball was fizzed out to Declan McDaid on the right with McDaid getting to the byline and centring the ball. At the time the ball left McDaid's foot there were three home defenders versus one away attacker but inexplicably Liam Polworth and Kevin McHattie then ran towards where the ball had just come from opening space up for Luke McCowan to smack the ball into the roof of the net from the edge of the six yard box. The home side struggled in the first half and it wasn't until the 37th minute that they carved out their first decent effort at goal as Jordan White's shot was saved by Ross Doohan. This pattern continued into the second half with Inverness looking nervy. Ayr could have levelled the tie in the 72nd minute when substitute Michael Moffat set-up Robbie Crawford who failed to trouble Mark Ridgers in the home goal. The home side's concerns were settled ten minutes from the end of the ninety when Liam Polworth whipped in a free-kick from the left and Coll Donaldson got to the ball ahead of Ross Doohan to nod into the back of the net. This knocked the stuffing out of Ayr and a couple of minutes later Doohan had to be ready to deny Andy Murdoch's long-range effort to keep his side level on the day. The away side's threat melted away in the concluding minutes when Inverness securing passage to the semi-final and a meeting with Dundee United. 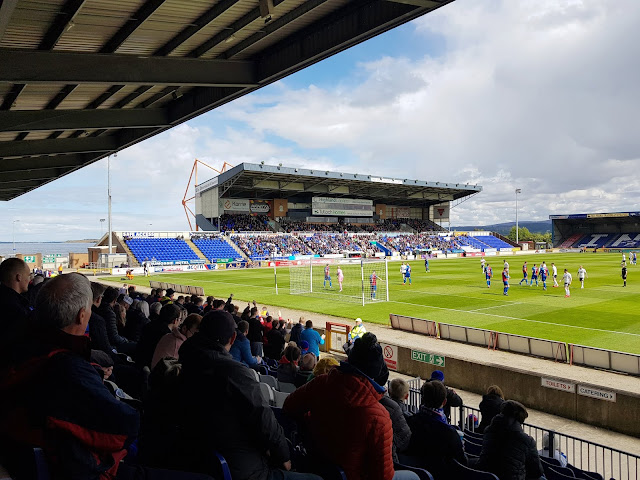