My thirty-seventh new ground of 2019 was on Sunday 19h May at Hásteinsvöllur in Vestmannaeyjar, Iceland. The match was ÍBV vs. Vikingur Reykjavik in the Icelandic Úrvalsdeild.

Hásteinsvöllur is on Heimaey, the sole inhabited island in the Vestmannaeyjar archipelago, off the southern coast of Iceland. The ground is in the north-west of Heimay just outside the island's main town. The residential areas can be reached via a short walk in an easterly or southerly direction while there is a golf course to the west. The northern side has a road running adjacent to the ground before the gradient increases sharply providing the spectacular backdrop to Hásteinsvöllur. The venue opened in 1912 and is three-quarters of a mile south-west of the island's harbour which transports passengers to and from the mainland harbour at Landeyjahöfn. 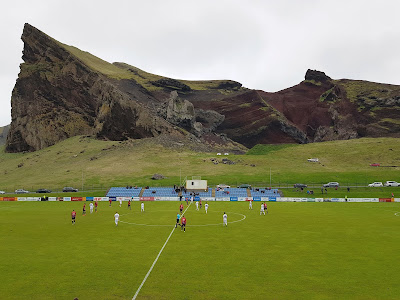 The main stand is in the middle of the southern side of the ground. The stand was constructed in 2012 providing the ground with a covered spectator area for the first time. It has 456 bucket seats built into the concrete levels as well as a separate plexiglass box at the back for officials and media. Underneath the stand are the two dugouts and a tunnel leading back towards a separate dressing room building and an indoor training facility. The stand is carved into a shallow grass bank which become flat by the time it reaches pitch level. The southern flank also has a car park and a two-storey club building with a clubhouse and offices and a wooden food hut outside this. 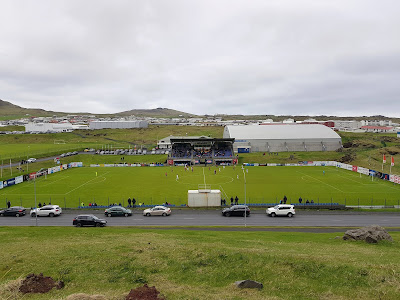 The other stand at the venue is an uncovered 489 seat structure built into a grass bank on the northern side. There is a shipping container at the back of the middle of the stand which takes up the top three rows in this area. Spectators can also choose to sit on the grass areas either side of this. Until recently the northern area of the ground was completely open with people able to watch with unimpeded views from the side of the road. Fencing has now gone up to enclose the ground but during my visit a couple of individuals opted to drive up an access road to a small flat area part of the way up the hill where you can get a good look at proceedings. The eastern end of Hásteinsvöllur has a fence with advertising hoardings attached to it directly behind the goal with a grass bank beyond this leading up to the access road to the car park. Above this access road is an additional pitch for outdoor training. The western end similarly has a fence with advertising hoardings by the goal but the uneven grass bank adjacent to this is now completely cordoned off reducing Hásteinsvöllur to a three-sided ground. 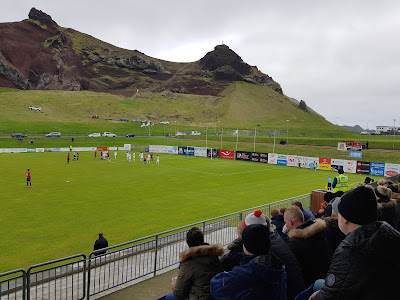 This was a clash of the bottom two with neither side managing a win in their first four games of the 2019 season. Barely a minute was on the clock when ÍBV went close through a Vídir Thorvardarson freekick which was dipping towards goal until visiting keeper Þórður Ingason palmed it away. Thorvardarson kept causing early problems and in the 13th minute he got to a long ball upfield just ahead of Ingason managing to head it towards goal as they collided at the edge of the box. However unfortunately for him the ball ended up trickling just wide of the post. Þórður Ingason was called into action again ten minutes after this when Jonathan Franks' cross from the left was headed low by Priestley Griffiths into the arms of the Vikingur shotstopper. The away side were second best in the opening period with their best opportunity coming two minutes before the interval when a counter-attack finished with Gudmundur Andri Tryggvason passing to Ágúst Hlynsson as he ran into area. Hlynsson's shot was a tame one though and proved no difficulty for ÍBV goalie Halldór Páll Geirsson. The early part of the second half was pretty drab with little happening until the 65th minute when an away corner was powerfully headed at goal by Gudmundur Andri Tryggvason with Geirsson doing well to hang onto it. In the 70th minute a Vikingur cross into the area saw ÍBV defender Felix Örn Fridriksson hold onto his man to prevent him from scoring. The referee spotted it and awarded a penalty as well as a red card to Fridriksson. Rick ten Voorde rolled the spot-kick into the bottom corner sending Geirsson the wrong way. Nine minutes from time the visitors could have secured three points as a crossfield ball found Ágúst Hlynsson who cut inside on the left and curled the ball just wide of post. A fairly flat game saw some late drama as a second goal arrived in injury time. With 92 minutes on the clock ÍBV substitute Breki Ómarsson sent in a cross from the right which was met with a bullet header by Jonathan Glenn from six yards out to salvage a point for the hosts. This ensured the winless start to the season continued for both sides but it will have been particularly galling for Vikingur to be so close to bringing three points back to the mainland. 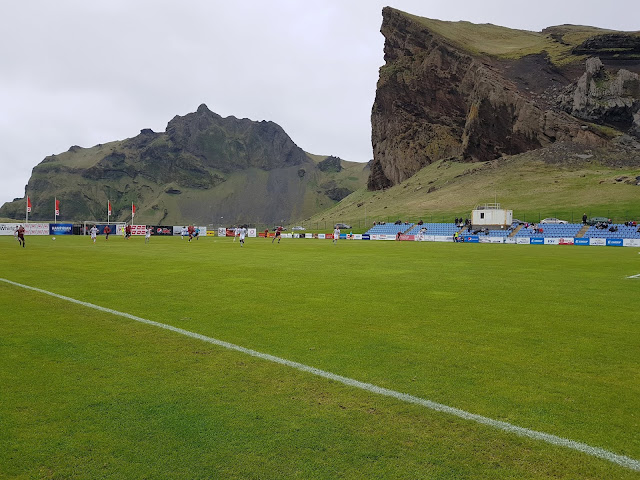