My twenty-eighth new ground of 2017 was on Sunday 1st October at the Talen Energy Stadium in Chester, Pennsylvania, USA. The match was Philadelphia Union vs. Seattle Sounders in Major League Soccer.

The Talen Energy Stadium is in the city of Chester around 14 miles south of the centre of Philadelphia. The ground sits on the banks of the River Delaware which separates the states of Pennsylvania and New Jersey. The nearest railway station is Highland Avenue one mile north-west of the ground. However there is a shuttle bus service from the larger Chester Transportation Center station located two miles north-east of the stadium. The venue opened in 2010 is the club's main home though they occasionally play select matches at the larger Lincoln Financial Field in the city of Philadelphia itself. 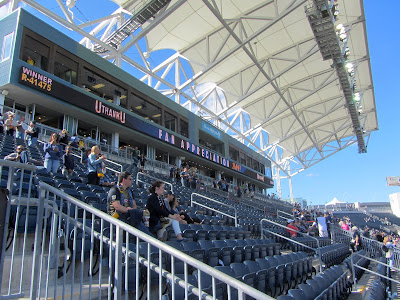 The eastern and western sides of the ground are very similar in appearance with a large single tier of seating with corporate facilities at the back and a sloping roof covering the stand. The West Stand is the 'main' stand as it has a larger double-decker corporate area, the Union Ale House beer garden at the back of the seating and additional tables and seating at the bottom of the stand. The interior contains the reception, dressing rooms and club shop with the exterior playing host to a family area with stalls and games on the grass area outside. This side is the one with the most space and has two additional full-size pitches across the road. The East Stand borders the Commodore Barry Bridge across the Delaware River and the design of the sloping roof to blend in with the bridge is aesthetically superb. 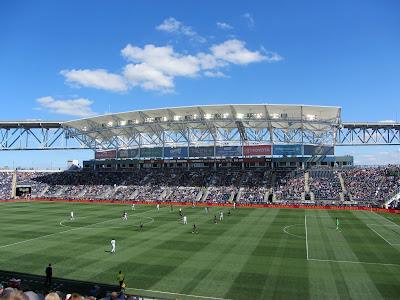 The single tier of the eastern and western sides continues round via quadrants to the northern end of the ground. With the bowl format this results in wide continuous concourses with large numbers of concessions. The uncovered North Stand has a VIP section at the top with a balcony for most of the length overhanging the seating deck below. Atop the roof of this end is a large media board containing advertising and a big screen TV in the middle. Across the road from this end is the main car parking area. The South Stand, or River End, is the only one separated from the rest of the bowl and gives off the vibe of a temporary structure. The uncovered stand is smaller than the rest of the seating areas at the ground and is home to the Sons of Ben club ultras. 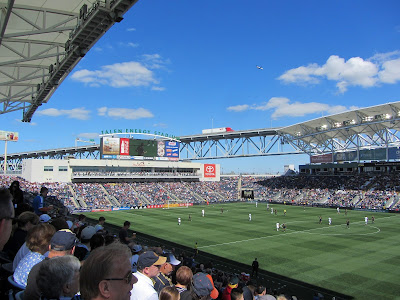 The first half was a cagey one with the home side getting a foothold in the tie around the quarter-hour mark. A couple of quick-fire efforts stung the palms of Sounders' keeper Stefan Frei before Philadelphia took the lead in the 28th minute. Ilsinho received the ball on the edge of the area and as four visiting defenders went to close him down he noticed this had left a huge amount of free space for Marcus Epps on the right-side of the area. He clipped it over to Epps who slightly miscontrolled at first but with so much was time was able to regain his footing and shoot low into the middle of the goal. The only other incident of note in the first half was in the 35th minute when Fafa Picault collided with an away defender when racing through on goal. The referee waved away appeals which had he given the foul would have seen the visitors reduced to ten men. Seattle, who had offered nothing in the first half, were given a lift when Clint Dempsey joined the field just shy of the hour mark and immediately spurred his side into several attacks. Dempsey himself went closest in the 62nd minute when a 20-yard drive required an acrobatic save from Andre Blake. Shortly after this the ball again fell to Dempsey in a dangerous position when he lost his man to get into the six-yard box but the ball came at him quickly and he blazed way over. The Sounders generated another decent chance with 10 minutes to go when Will Bruin's curling 25-yard shot was palmed away by a stretching Blake. Union really should have scored in the 87th minute when Picault's cross from the left found Jay Simpson with a free header from six yards out. However his effort was spurned away by Frei. It didn't cost the hosts though as from the resulting corner Roland Alberg staved off the attention of two defenders and unleashed a fierce effort from an unlikely angle on the far side of the area. The shot wrong-footed Frei who was only able to deflected it in off the far post. 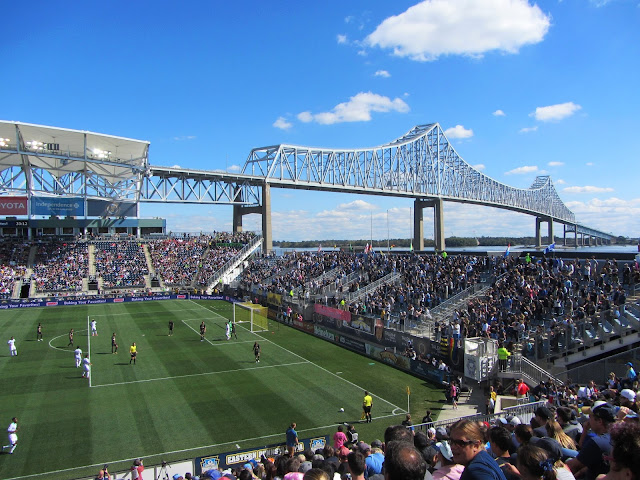