My nineteenth new ground of 2019 was on Wednesday 10th April at New Dundas Park in Bonnyrigg, Midlothian, Scotland. The match was Bonnyrigg Rose Athletic vs. Lothian Thistle Hutchinson Vale in East of Scotland Football League B.

New Dundas Park is located in the centre of the town and over the decades has gradually been penned in by housing developments requiring additional land around the ground. This means housing borders the complex on all four sides with only a small parcel of land beyond the northern side for a car park and social club. The re-opening of the Borders Line brought the town of Bonnyrigg within reach of a railway line so the ground can now be reached via a one-mile walk from Eskbank station located to the north-east. New Dundas Park has been home to the club since 1953. 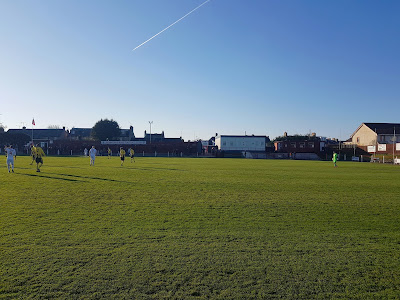 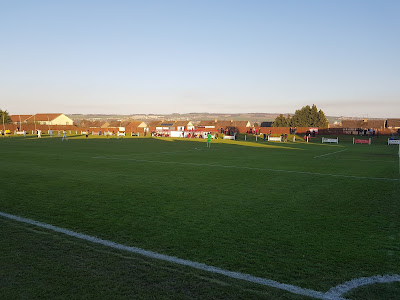 The southern side has no stands but does have a grass bank which, due to the natural slope of the arena, steepens as you work your way to the western end. Unusually, the club have taken advantage of this by installing metal barriers in the grass in the same way as you would normally find in a concrete terrace. In the middle of this side are two dugouts at the bottom of the grass bank meaning that spectators can stand behind these without their views being hindered. The areas behind the two goals are more restrained than the two sides. The eastern goal has a small, but steep, grass bank with an uneven four level concrete terrace built into the northern half of this end. Meanwhile at the other goal there is a grass section which slopes up towards the northern end and a covered four level concrete terrace in the north-west corner. There is netting running the length of this side to prevent balls landing in the gardens of adjacent houses. 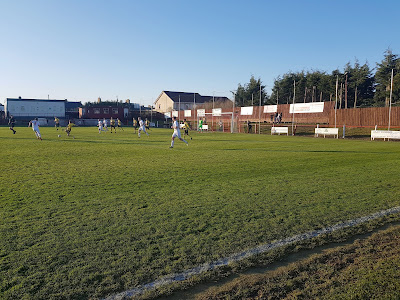 Bonnyrigg Rose had absolutely dominated their first campaign in the East of Scotland League wracking up 61 points out of a possible 63 going into the game. Unsurprisingly the title had already been clinched so they were just looking to keep up their run ahead of the promotion play-offs against the other conference winners. Even so the visitors started off well with Tony Muir's 20 yard shot in the 4th minute requiring Michael Andrews to backpeddle en-route to saving at the back post. A couple of minutes later a misplaced pass in a dangerous area resulted in Sean Wringe being slipped in on goal but he smashed just over the bar. Bonnyrigg wanted to arrest this promising start by the visitors and thought they'd gone ahead straight after this when Ross Gray headed in Neil Martynuik's cross only to see the offside flag raised. Gray only had to wait two more minutes to get on the scoresheet though when he ghosted round the back of the away defence to tuck Aaron Murrell's pass into the bottom corner. A well-contested affair saw the second goal arise in the 27th minute when Lewis Turner lashed a 25-yard shot in off the underside of the bar. In the 31st minute it was almost 3-0 when a corner to the back post found the head of Dean Hoskins and his looping effort was cleared off the line by an away defender. To their credit Lothian Thistle kept plugging away and were a whisker away from grabbing a goal back five minutes before the interval as Kevin Brown's 25-yard free-kick hit the underside of the bar before bouncing away from goal. It turned out to be a painful few minutes for the visitors as in the 42nd minute they went 3-0 down. The goal was an unfortunate one for Lothian defender Liam O'Donnell - with him under pressure from Ross Gray he attempted to nod the ball back to keeper Liam McIntosh without knowing Aaron Murrell was in between them. Murrell must not have believed his luck as the ball fell at his foot and he drilled past the goalie with a first-time shot. It took less than five minutes of the second half for Bonnyrigg to go further ahead. After Dean Brett was felled near the corner flag on the right-hand side the referee awarded a free-kick. The deadball situation certainly wasn't an obvious shooting opportunity but Lee Currie whipped the ball over the top of everyone and into the far corner of the net. Judging by his reaction Currie wasn't intending a shot but the end result was a four-goal lead for his side. That lead was pegged back to three just a few minutes later though when Ryan Hutchison played a nice one-two with Tony Muir before his bobbled shot from 18 yards crept under Michael Andrews in the home goal. The hosts notched up a fifth goal in a near-identical scenario to the fourth. A free-kick on the wing was crossed into the box and ended up going over the top of everyone into the far corner. This time it was Adam Nelson on free-kick duties rather than Lee Currie but Bonnyrigg's luck was clearly in that evening. The chances kept coming for both sides and Louis Swanson really should have made it six late on when he missed an open goal. However such a scoreline would have been very harsh on Lothian Thistle who did not give a bad account of themselves but can consider themselves unfortunate to come up against a side so good in front of goal. 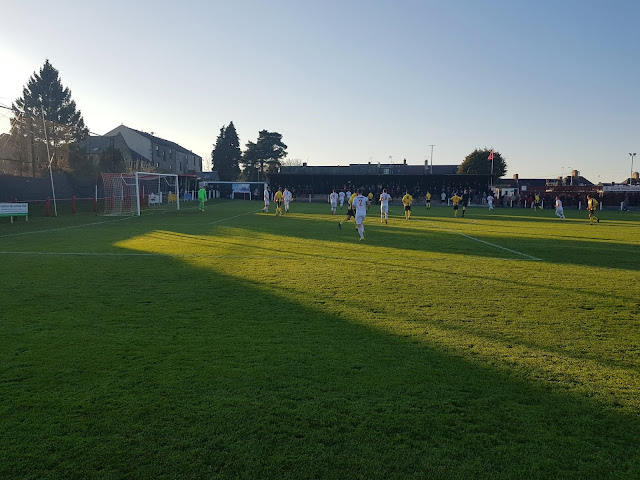