My twenty-first new ground of 2016 was on Tuesday 1st November at Wordsworth Drive in Taunton, Somerset. The match was Taunton Town vs. Slimbridge in the Southern League Division One South & West.

Wordsworth Drive is located in the Lambrook area of Taunton to the east of the town centre and 1.2 miles from Taunton railway station. The ground has housing to the south and west and is bordered by a park and a fire station to the east and a bus depot to the north. The venue has been home to the club since 1953. 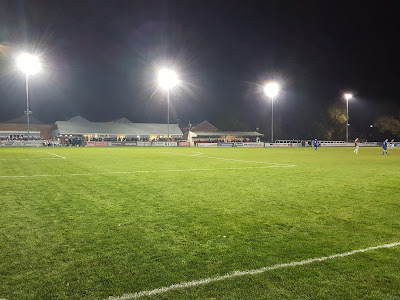 The southern side of the ground has a long all-seater stand known as the Tom Harris Stand which consists of 3 rows of seating for the majority of its length. There are then two small areas of uncovered flat standing either side of this structure. Further along into the south-west corner there is a building with the players dressing rooms. 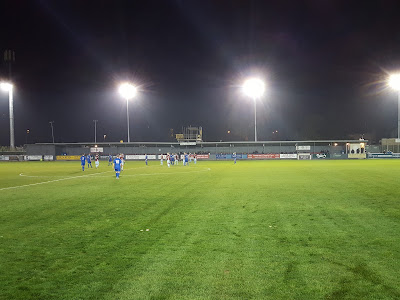 The northern part of Wordsworth Drive has a combination of spectator zones. Starting from east to west there is an uncovered concrete terrace with 3 platforms. Directly behind this is a grass area with a couple of small goals. Adjacent to this is a 93 seat covered stand and this is then followed by a raised flat concrete platform with the clubhouse behind. Next to the clubhouse is the boardroom and finally a snack bar demountable in the north-west corner. One thing to note is that the two dugouts are positioned at near-opposite ends of this side of the ground - the largest gap between dugouts I've seen at a ground. The ends behind both goals are pretty similar with a 3 level concrete terrace at the eastern end and a 4 level concrete terrace at the western end. In both cases they are largely uncovered but do contain a covered element directly behind the goal itself. 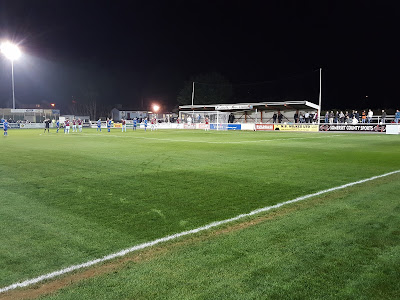 This goal ended up being one-way traffic for most of the 90 minutes but extraordinarily it remained goalless throughout. Taunton were all over Slimbridge and almost took the lead in the 13th minute when Adam Kelly's free-kick hit the post. This set the tone for the night as Taunton would go onto hit the woodwork another four times. The next of these came in the 25th minute when a corner was headed onto the crossbar by Matt Wright from close range. In the 36th minute Kelly hit the post again from outside the box and in the midst of all these there were a few goalline scrambles where Slimbridge were somehow able to prevent Taunton scoring. Barely ten seconds into the second half Wright hit the post and once again Taunton dominated from this point on. Adrian Kowalski was having an impressive game in the visitors goal and when it wasn't the woodwork denying the hosts it was the Slimbridge goal pulling out some good saves. In the 63rd minute Taunton had their best chance when they were awarded a penalty for a trip in the box. Shane White stepped up and sure enough Kowalski guessed right and palmed away the spot kick. The home side continued to lay siege to the western end of the ground in the final stages and had corner after corner but incredibly they just could not score and the game finished 0-0. 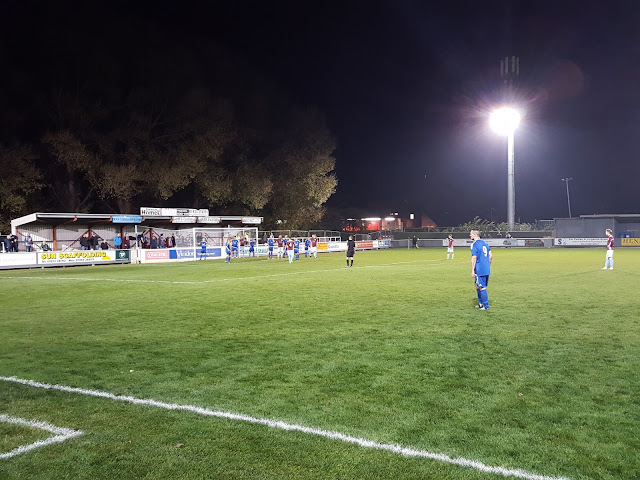