My fourth new ground of 2018 was on Tuesday 27th March at Thames Road in Canvey Island, Essex. The match was Concord Rangers vs. East Thurrock United in National League South.

Thames Road is in the south-west of Canvey Island a few hundred yards north of the Thames Estuary. The club are one of two on the island with Canvey Island FC a couple of miles east along the coastline. The ground is away from residential areas with its neighbours being a gas plant to the west, a sewage treatment centre to the south and the Thorney Bay Village caravan park to the east. The land to the north is unused besides being a makeshift car park for the club. As the island does not have a railway station the nearest to the ground is Benfleet, some three miles north. The venue has been home to the club since 1985. 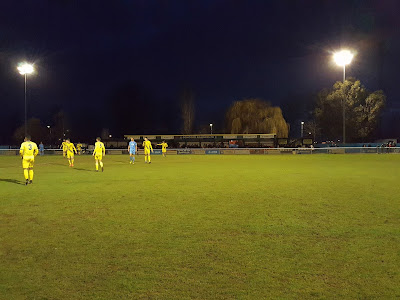 Spectators enter through the north-west corner of the ground and find the clubhouse in this corner. This building houses the Sixty Seven Lounge for general fans as well as a separate room for officials. In front of this there is an open patio area with picnic benches which faces toward the pitch and there is also a food outlet adjacent to the turnstiles. Working towards the field of play there is an uncovered standing area and to the right of this a terrace which takes up just over half of the northern end. This stand is a mixture of concrete, metal, brick and wood and is split into three sections of three level terracing. It is all covered except for a small section next to the stand which is an uncovered concrete terrace area. Behind this stand there is netting to stop balls heading into the car park. 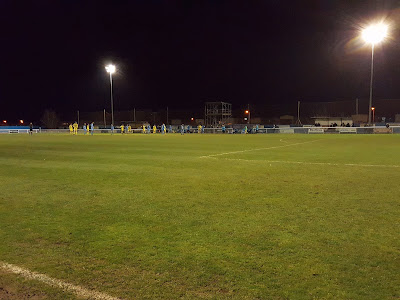 The club have experienced a fairly rapid rise up the leagues during the last decade and this is in evidence on the western side of the ground. In the middle of this side is the main stand which has 174 seats spread across two sections. In the centre of the stand is a press area with a commentary box at the back. There are then an additional two seating sections with 50 seats each which have been bolted onto either end of the main stand to help meet the seating requirements of this level. In the direction of the southern end there is an uncovered standing area with a decent amount of space which will be useful should the club ever need to expand the stand further this way. There are two more seating areas on the opposite side of the ground with two small stands of 50 seats towards either goal. The one near the northern end of Thames Road is cordoned off thereby reducing the active seats at the venue from 374 to 324. The rest of this side is uncovered standing with a structure of scaffolding in the middle which serves as a TV gantry. The two dugouts are below this and there is netting for the whole length of this side in light of the caravan site behind. Finally the southern end of Thames Road is fairly sparse with a strip of uncovered hard standing all the way along and one covered area of flat concrete set directly behind the goal. 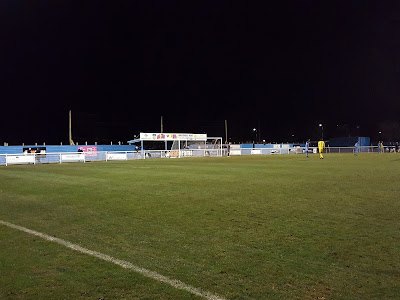 Concord went into the game on a bad run of five defeats from their last six and it started to go wrong for them fairly early on. The visitors took the lead in the 9th minute when a corner found Max Cornhill at the back post and he headed in. Ten minutes later it was almost 2-0 when a scramble from another corner was cleared off the line. Unfortunately for the hosts a corner proved their undoing again in the 24th minute - once more there was a scramble in the box and this time the ball fell to Ryan Scott who lashed a shot into the top corner. Concord struggled throughout the half but had their best opportunity five minutes before the break when Khale da Costa was unleashed down the left, ran into the box and dragged his shot just the wrong side of the post. The home side came out positively for the second half and called East Thurrock goalie Lukas Lidavikicius into making a couple of saves. Any hope evaporated during a three-minute spell when Concord conceded twice. The first came in the 54th minute as a through ball played Sam Higgins in on goal and though his shot was saved by Louis Wells the ball was passed back into the danger zone straight to Lewis Smith who controlled the ball and slid into the bottom corner. Three become four in the 57th minute as Higgins was put clean through and this time made no mistake sending his shot into the roof of the net. With the game in the bag East Thurrock eased off after this allowing Concord to grab a consolation in the 72nd minute. It came from the penalty spot after da Costa was brought down when he looked likely to score. Substitute Femi Akinwande stroked the penalty down the middle to reduce the arrears. Akinwande did come close to getting on the scoresheet for the second time in the 89th minute as his low drive from just inside the area came back off the post. The final section of the game ended up being pretty even though there was too much work to do for the home side to launch a comeback. 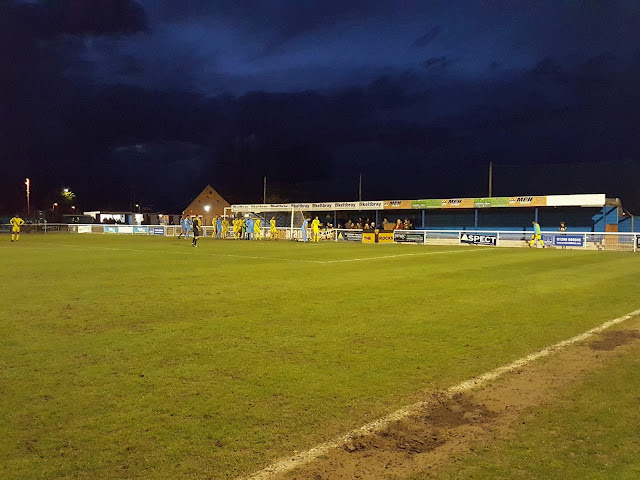