My twenty-seventh new ground of 2017 was on Wednesday 27th September at the Red Bull Arena in Harrison, New Jersey, USA. The match was New York Red Bulls vs. D.C. United in Major League Soccer.

The Red Bull Arena is located in the Riverbend District of Harrison, New Jersey. The stadium was opened in 2010 as the first step in the regeneration of the industrial area located near a railway depot on the banks of the Passaic River. The stadium has few neighbours at present though some new housing has been constructed since its completion. It is well served by transport links with the venue half a mile south of the Harrison railway station on the PATH line just 20 minutes from the new World Trade Center station in Manhattan. The venue has been home to the club since 2010 when they left their former home at the Giants Stadium where they had played since forming in 1996. 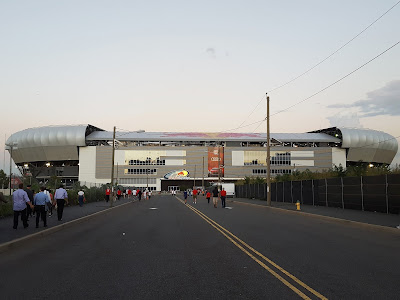 The ground has a lower-tier bowl which goes the whole way round the stadium. This is uniform seating except for a section by the half-way line on the western side which is split into different areas for media, officials and the two dugouts with the players tunnel in between these. The other section of note is the one behind the southern goal which is inhabited by the club's ultras. Atop the lower-tier is a second tier which starting from the north-west quadrant works its way round the northern, eastern and southern sides of the venue before ending at the south-west quadrant. 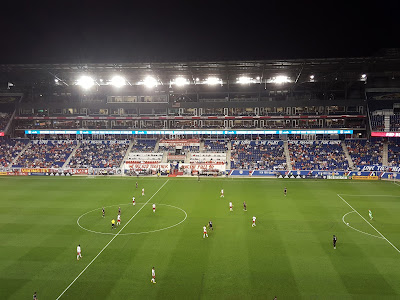 The West Stand has a separate upper section consisting of two levels of corporate boxes, with executive seating in front of each one, and one partially complete level appearing to house a control box. In between the two tiers on this side is a large club shop and corporate bar. The remainder of the stadium has wide concourses on ground level and above the lower tier which go the whole way round and contains a huge number of food outlets and small club merchandise areas. There is a small extra club shop on the exterior of the West Stand - this sits close to the ticket office and reception. 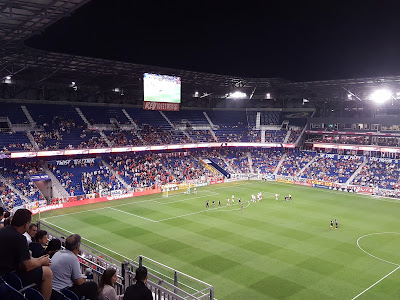 New York began well creating a good chance in the 3rd minute when a ball over the top from Connor Lade found Bradley Wright-Phillips who backheeled for Sacha Kljestan to shoot straight at Steve Clark who saved at point blank range. The hosts took an expected lead in the 19th minute. Again it was Lade being the creator as his cross from the left went all the way to the right side of the area where it found Tyler Adams. The defender chested the ball down and lashed it across goal into the top corner. The home side were well on top in the first half and had the ball in the net in the 41st minute when Sacha Kljestan played the ball through to Bradley Wright-Phillips who slotted past the keeper. However the offside flag was up and just before the half-time whistle the game swung back towards D.C. when they equalised. Zoltan Stieber's fairly tame free-kick was directed low and as it went through the wall took a deflection of the head of a defender who had fallen over sending the ball spinning into the bottom corner. The home side continued their domination in the 2nd half and in the 65th minute scored have scored when the ball was crossed in front the right and found Wright-Phillips with an open goal from a couple of yards out. Unfortunately for the Red Bulls the ball got trapped under his feet and by the time he got his shot away Steve Clark was there to palm it to safety. Out of nowhere in the 70th minute the visitors took a surprise lead. Sloppy defending by the Red Bulls allowed Russell Canouse to pick the ball up on the edge of the are and poke it through to Patrick Mullins who in turn poked the ball past Robles. This energised New York and in the space of a few minute the game was turned on its head. In the 74th minute the game was back level again - the ball was bouncing around the D.C. box and Connor Lade's shot from the right was cleared off the line as far as Tyler Adams who controlled the ball before steering it into the bottom corner from 15 yards out. Barely a minute after the restart a rare D.C. attack was countered and Wright-Phillips played an excellent ball which unleashed Gonzalo Veron down the right wing. Veron ran 50 yards into the area when Paul Arriola's clumsy tackle sent him sprawling for penalty. Veron picked himself up and dispatched the penalty to the keeper's right to put the hosts back in front. From this point on it was just a case of seeing the game out but the home side couldn't even manage that as for the third time some awful defending let them down. As the match ticked over the 90 minute mark United's Nick DeLeon flung in a hopeful cross from the right and despite being under no pressure Red Bulls' Fidel Escobar completely miskicked the ball sending it flying into the corner of his own net. It summed up a frustrating night for New York who can only have themselves to blame for throwing away a win. From a neutral prospective the exciting 2nd half was a welcome response to a poor 1st. It was a shame therefore that so few people were there to see it with the official attendance of 16,538 at least double the number of people who were actually there. 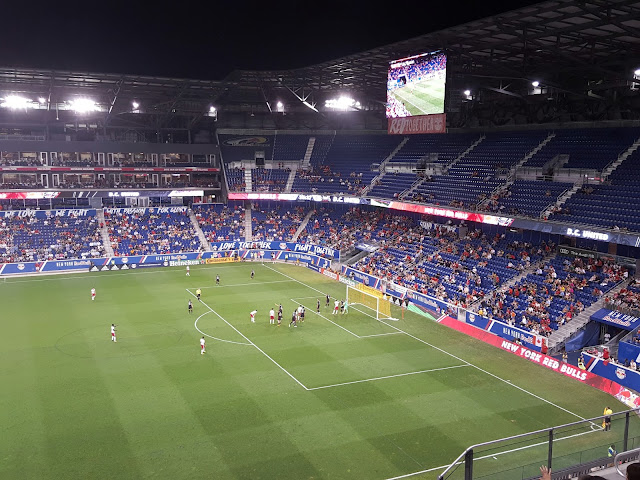