My fifty-second new ground of 2019 was on Saturday 23rd November at Aldiss Park in Dereham, Norfolk. The match was Dereham Town vs. Romford in the Isthmian League North Division.

Aldiss Park is located right on the eastern edge of the town of Dereham. The football ground is the focal point of the site which also includes an area for bowls, a concrete basketball and tennis court as well as additional pitches to the north. Beyond these pitches the site is bordered by fields on the eastern and northern sides with the other two sides of the ground adjacent to housing developments. Dereham's railway station is on a heritage line with the nearest mainline station in Norwich some 15 miles east. The venue has been home to the club since 1996 when they completed their long awaited relocation from the Recreation Ground. 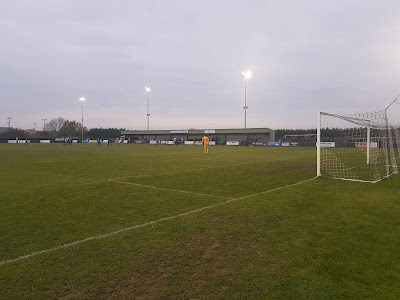 The Tony Barker Stand takes up the middle half of the northern side and is a mixture of seating and standing areas. There are 150 seats across two rows, including a section for officials in the middle, and this bookended by two raised concrete standing areas at either end. The remainder of this side is uncovered hard standing with grass behind. 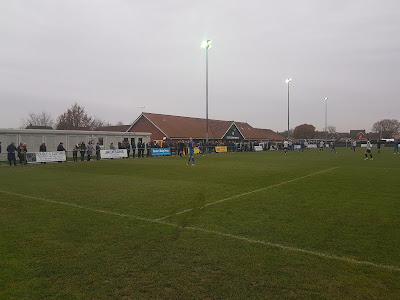 The southern side has a large clubhouse with dressing rooms and a food outlet down the side. The clubhouse sits adjacent to a large hard standing area which runs the length of the pitch. The two dugouts are also located in front of the clubhouse. The western end has a small four level metal terrace towards the north-west corner of the ground but the rest of this end, as well as all the eastern end, are uncovered hard standing with grass behind. 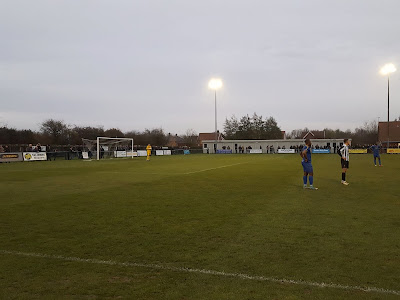 Dereham were the in-form side going into the game having scored ten goals in their previous two games as they continued their play-off push. Romford may have been bottom of the table with a single win all season but the arrival of Glenn Tamplin as their new owner the previous week this team shared very little with the one that had struggled so much in the opening months. Any hopes the visitors had of arresting their form took a big hit as they conceded with just 50 seconds on the clock. It happened when Rhys Logan's cross from the right was saved by Josh Strizovic but only as far as Ryan Crisp who knocked in the rebound from six yards. The new Romford players were clearly taking time to adjust to each other and a mix-up in the 9th minute saw defender Tambeson Eyong and Strizovic both go for the ball with Eyong heading just wide of his own goal. Romford did get better after this but conceded again in the 31st minute from a beautiful 25 yard free-kick into the top corner by Rhys Logan. A minute before the interval Logan almost repeated this trick as his hanging free-kick required a fingertip save by Strizovic to keep the away side in the goal. This looked even more important less than two minutes after the restart when Romford reduced the arrears to a single goal. It was a similar one to Dereham's first with Adam Cunnington getting down the right and crossing into the area where Adam Morgan poked home on the goal line. Dereham went on the attack trying to pull clear again and in the 61st minute Logan's free-kick saw Toby Hilliard just nip in front of the keeper only to nudge the ball just the wrong side of the post. Things were made much trickier for Romford in the 69th minute when substitute Jake Hall was dismissed after picking up two deserved yellow card for late tackles. For the closing stages Dereham looked the more likely to score - in the 76th minute Ryan Crisp received the ball in the box, turned a defender well and had his shot palmed wide by Strizovic. The ball was in the goal in the 86th minute when Toby Hilliard scrapped with the keeper for the ball and got it free for David Hinton to stroke into an empty net. However the referee determined Hilliard had committed a foul while trying to get hold of the ball and the effort was ruled out. No matter for the hosts though as they did secure a third goal in the second minute of injury time. Hinton found Adam Hipperson the left of the area and he cut inside Michael Aziaya before drilling low past Strizovic at the near post to round off a 3-1 win. 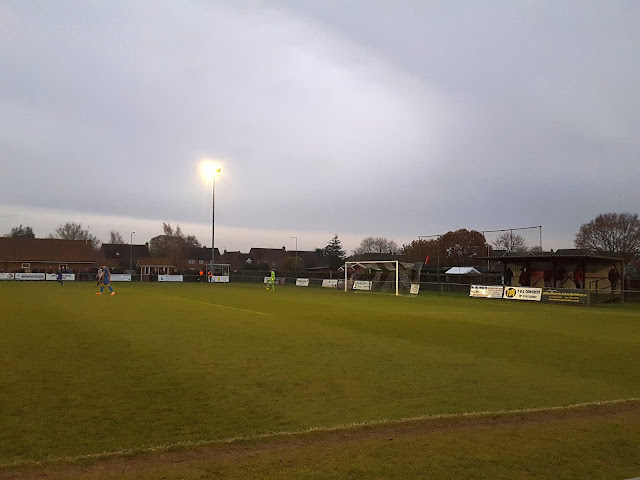