My twenty-seventh new stadium of 2019 was on Monday 22nd April at Huish Park in Yeovil, Somerset. The match was Yeovil Town vs. Colchester United in Football League Two.

Huish Park is located in the midst of an industrial estate on the north-western edge of Yeovil. There is a near-full size artificial pitch belonging to the club on the western flank of the stadium with industrial and business units beyond this. These units also border the southern side of the ground with the eastern side given over to a car park and the northern end backing onto a full-size grass pitch with more industrial buildings after this. In addition to the football ground being well outside the town centre the town's two railway stations are similarly out of the way meaning it is a 3.5 trek to Yeovil Pen Mill station or a 4.5 mile hike to Yeovil Junction station. The venue has been home to the club since 1990 when they left their town centre location of Huish Athletic Ground which had become prohibitively expensive to maintain after 70 years of use. 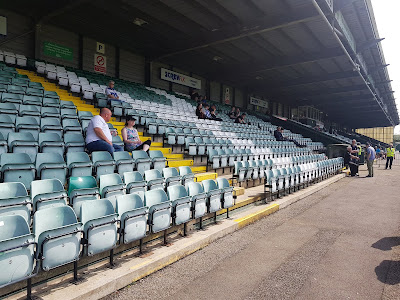 The ground has similarly sized stands across its four sides with two all-seater sides down the length of the pitch and two terraced stands across its width. The Main Stand on the western side and has executive boxes running along the majority of the back wall. At the front are the dugouts and the players tunnel leading back to the dressing rooms. The interior of the stand has the club reception, ticket office and club shop. The East Stand is similarly designed but instead of having corporate boxes along the back instead has a media section with press box and TV filming area as well as a police control box. Smaller away followings are assigned the northern end of this stand. The two stands give a combined seating capacity for the venue of 5,212. 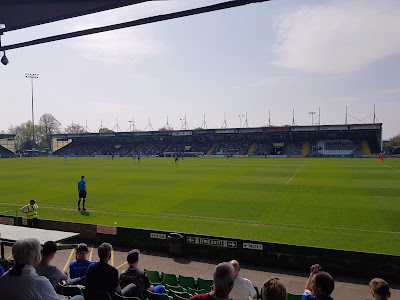 The Home Terrace behind the southern end can hold around 2,500 home fans - it was originally uncovered when constructed but a roof was added to it in 2001. With the venue being comparatively modern this means three of the four stands have cantilever roofs resulting in unrestricted views throughout. The only uncovered stand is the Away Terrace at the northern part of Huish Park. This stand is only required for large away followings and can accommodate around 1,750 taking the stadium's total capacity up to 9,565. Plans to modernise this end were mooted a few years ago with the club up in The Championship but having been relegated three divisions in the space of six seasons resulting in a fall out of the Football League this will no longer be required. 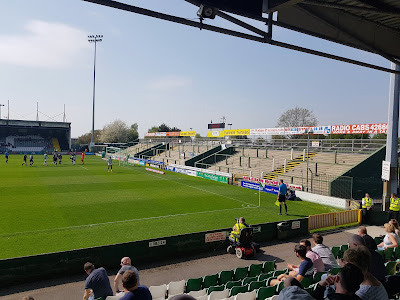 Yeovil went into the afternoon on a dreadful run of one point in eight games which had seen them slid into the bottom two. With only three games remaining they knew picking up three points was vital. Colchester meanwhile still had play-off aspirations despite winning only three of their previous eleven so defeat for either could be very damaging. The Glovers had the first meaningful chance in the 18th minute when Bevis Mugabi headed a corner off the outside of the post. The visitors had a double attempt in the 25th minute as first Abo Eisa's shot was saved by Nathan Baxter before the ball was put back into the box and Frank Nouble skimmed the ball just wide. Eisa was denied again by Baxter seven minutes after the restart when he saved his tame effort from six yards. From this save Yeovil launched an attack and when the ball fell to Jake Gray just outside the area he tried his luck with a shot that squirmed under Dillon Barnes to put his side in front. Presumably frustrated at his error resulting in a goal the Colchester keeper then got in an altercation with Tristan Abrahams and kicked the Yeovil midfielder. The referee inevitably produced a red card rounding off a terrible 30 seconds for the U's. The visitors almost replied instantly though as Frankie Kent headed Brennan Dickenson's free-kick against the crossbar. Despite this effort it was certainly the hosts who appeared in the ascendancy and they could have been 2-0 up when Mihai-Alexandru Dobre played a neat one-two on the edge of the area before racing into the box and sliced his shot well wide. Five minutes after this Colchester substitute goalie Ethan Ross had to tip over Tom James' well-aimed free-kick. It looked only a matter of time before the hosts killed the game off but with fifteen minutes left Colchester got back on level terms. It came from a set piece with Brennan Dickenson's corner was headed on to fall at the feet of Tom Eastman who side-footed into the bottom corner from 12 yards. In the final minutes the Essex side looked more likely of the two sides to win it but the scores remained tied. A point was not a particularly useful result for either side as Yeovil stayed in the relegation zone and Colchester outside of the play-offs. 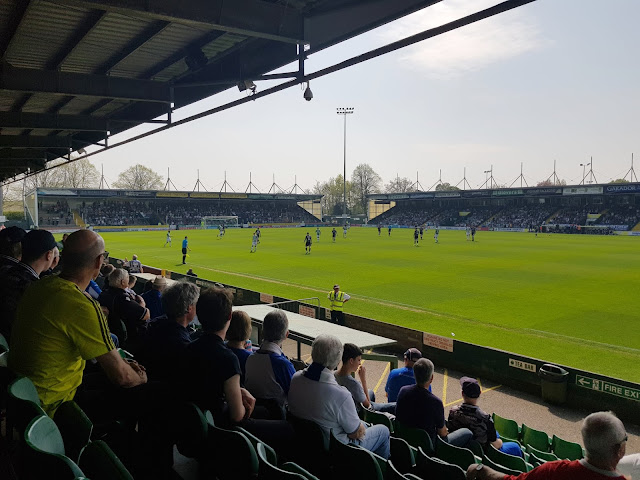