My tenth new ground of 2018 was on Monday 2nd April at The New Lawn in Nailsworth, Gloucestershire. The match was Forest Green Rovers vs. Colchester United in Football League Two.

The New Lawn is located on the western tip of the village of Nailsworth at the top of a fairly steep hill. The stadium is in a rural setting with fields to the north and west and trees to the south. To the east they are next door to a primary school with the residential areas all beyond this point. The remote setting means the nearest railway station is at Stroud some four miles north. The venue has been home to club since 2006 when they left the ground that gives the current one its name - The Lawn. Apart from a brief 3 year spell away for ground improvement works during the 1920s this had been Forest Green's home since their formation in 1889. 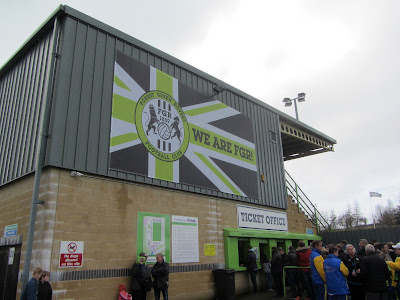 The stadium is dominated by the East Stand which runs the full length of the field of play. This all-seater stand has 1,881 seats with hospitality boxes running along the back of the stand. Unusually there are no dugout structures with two split areas of normal looking seating separated by a barrier from the rest of the spectators. Unlike other grounds in the Football League there is no barrier separating the seating areas from the pitch. Inside the stand itself is the reception, ticket office and a pub for home supporters. 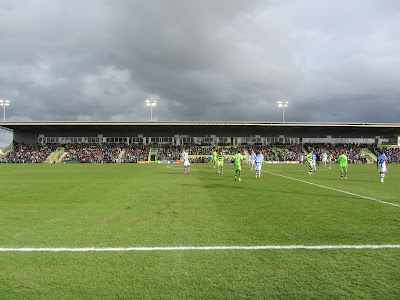 Upon my visit the western side of the ground, which is allocated to away fans, was made up of seven rows of concrete terracing and was entirely uncovered. In August 2018 the club completed construction of a 200 seat covered stand towards the southern end of the ground. This sits at the back of the concrete terracing so still allows for supporters to occupy terracing in front of the stand. In the north-west corner there is a food outlet serving these supporters - Forest Green are well known as a vegan club so no meat products on offer! The northern end has a covered terrace running for around three-quarters of its length with the north-east corner taken up by another food outlet. Directly behind this stand was a tented area for away fans to congregate in which again sold food and drink. The southern end of the ground also has a covered terrace though this only takes up around half this end. In the south-west corner there is an additional building which serves as the dressing rooms with this leading out onto the pitch via the players tunnel. 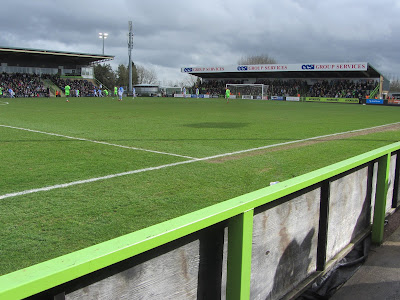 The game started off perfectly for Colchester as they recorded the opener after just 16 seconds. A neat one-two between Sammie Szmodics and Mikael Mandron sent Szmodics down the left wing and his cross found a free Drey Wright who knocked the ball into the corner of the net from inside the six yard box. The U's found themselves on top in the first half and some nice interplay between Szmodics and Wright saw the ball crossed into Szmodics who blazed over on the volley from six yards out. Straight from the goal kick the ball was sent back up the home end with Mikael Mandron dragging a shot wide when he was just about in on goal. The hosts finally started to get into the game after this and shortly after Tahvon Campbell missed a close range header Forest Green were given the perfect opportunity to level the scores when Tom Eastman clumsily fouled Haydn Hollis in the box. Reuben Reid sent Colchester keeper Sam Walker to the wrong way to ensure the sides went in tied at the break. The visitors managed to replicate their fantastic start to the first half by netting very early on in the second half. This time it took 89 seconds after the opening whistle for Ben Stevenson to pick up the ball 35 yards from goal, run unchallenged to the edge of the area before smashing into the bottom corner. Forest Green generated a couple of nervy moments from free-kicks and corners before Drey Wright had a shot cleared off the line in the 70th minute. The final section of the match was all Forest Green as Colchester dropped deep. The away side rode their luck a little over these minutes but held on for a deserved three points. 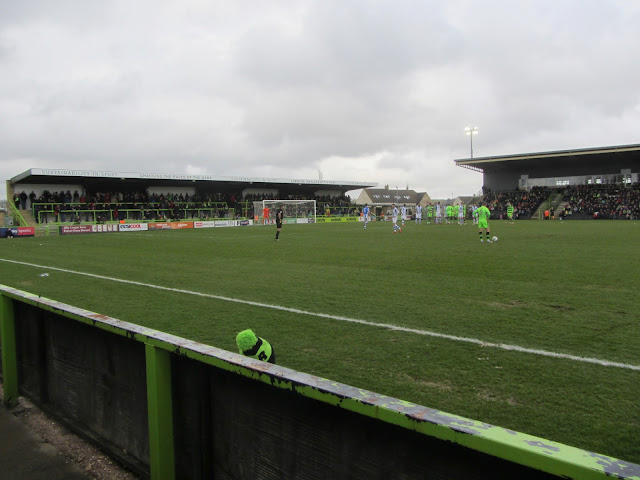