My nineteenth new ground of 2017 was on Tuesday 15th August at Crofters End in Sawbridgeworth, Hertfordshire. The match was Sawbridgeworth Town vs. Stansted in the Essex Senior League.

Crofters End is in the north of the town of Sawbridgeworth with its name taken from the fact it is at the end of a residential street called Crofters. The football complex is surrounded by housing on three sides with only the western end bordered by fields. One mile west of the town's railway station the venue has been home to the club since 1930. 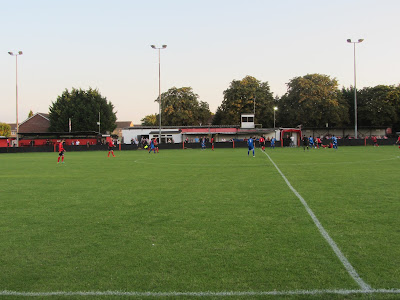 The southern side of the ground has a mixture of structures - starting in the south-east corner there is a snack outlet and next to this a covered area with 30 seats including several on a raised section up some steps. Near the half-way line are the turnstiles and a clubhouse with a covered standing section in front of it. From here working towards the western end is the players tunnel, a covered 76 seat stand and finally a section of uncovered standing. 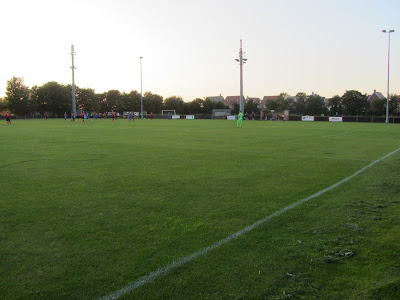 The remainder of the ground is uncovered standing. The northern side has two brick dugouts which are a significant distance apart and behind the viewing area a second full size pitch. The eastern end has a decent sized grass area behind the hard standing area with fencing directly behind the goal to prevent the ball going into the adjacent properties. The western end is narrower with lots of trees behind. This too has a fence directly behind the goal to catch errant balls. 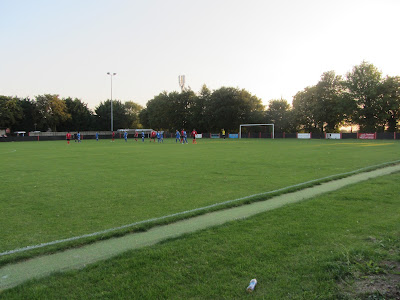 The hosts raced out of the traps and dominated the first quarter of the match-up. Sawbridgeworth hit the back of the net in the 4th minute after a very poor pass across the backline was intercepted by Lewis Francis who ran in on goal and slotted past the keeper from 12 yards. A few minutes after this Francis went close again when he knocked on a cross from the right wing and Stansted goalie Tim Pitman did well to get down low and block the ball. Another great chance was spurned in the 18th minute when a superb long ball put Gavin Cockman clean through only for him to scuff his shot and have it pounced on by Pitman. Stansted only got a foothold into proceedings around the half-hour mark but when they did they immediately scored. A ball over the top found Reggie Yembra who ran into the area before hitting the post with low effort. The ball bounced back at the feet of Jack Sykes who shot past the remaining defender on the line. The hosts were determined to get back in front and had a great chance within 90 seconds of the goal - the ball was played to Cockman on the left of the box but again it was Pitman who came out on top of the one-on-one situation. The twenty minutes after the interval saw nothing of note with the game getting bogged down in midfield. This changed in the 66th minute when home defender Matt Trew turned his knee and in the process ended uputting Jack Sykes through on goal. Fortunately for Sawbridgeworth Sykes got his feet in a muddle and failed to get his shot away. Sykes had no such trouble in the 73rd minute though when he picked up the ball in the final third and took a shot from 25 yards which went low past home keeper Matt Ponter. Sawbridgeworth reacted well to going behind and peppered the away goal with efforts but Tim Pitman was up to the task. The nearest either side got to another goal was the visitors in the 81st minute when Reggie Yembra nodded on a goal kick to Jordan Carter but as was the pattern of the game when he went one-on-one he failed trouble the keeper. 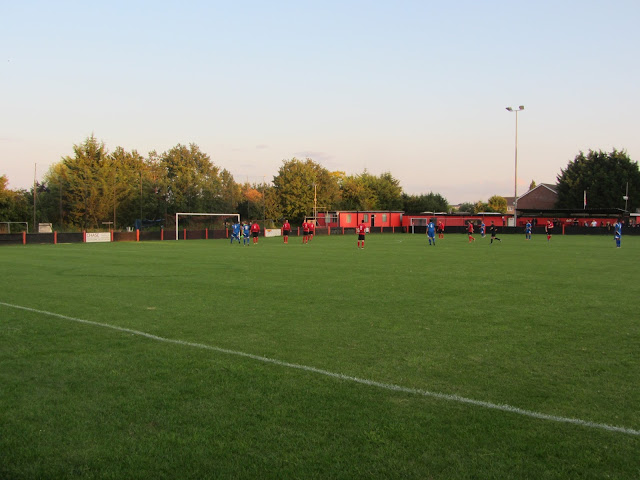