My fifteenth new ground of 2016 was on Monday 29th August at King George's Field in Tolworth, London. The match was Corinthian-Casuals vs. Tooting & Mitcham United in the Isthmian League Division One South.

The ground sits within King George's Field - large area of green space close to the A3 road. The venue is surrounded by this except for the northern side which is adjacent to the Chessington branch railway line. The ground sits close to two railway stations with Tolworth half a mile to the east and Chessington North one mile to the west. The ground has been home to Corinthian-Casuals since 1988 when they were able to take it over from Tolworth FC and redevelop the site. This finally gave the side a permanent home after a nomadic existence of eight different locations in the post-war period. 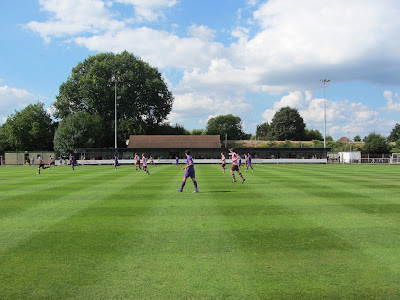 The north side of the venue is the most heavily built up area. Starting from the north-east corner this begins with 5 rows of concrete terracing followed by an area with 3 rows of seating. This consists of 121 seats with a press box at the back close to the half-way line. There is also a separate directors area with 35 seats. Behind the main stand there is a covered eating area extending out from the clubhouse as well as a shed containing the club shop. This takes up around half of the northern side of the ground and with the exception of a single demountable for club officials next to the stand the remainder of the north side is taken up by uncovered standing. 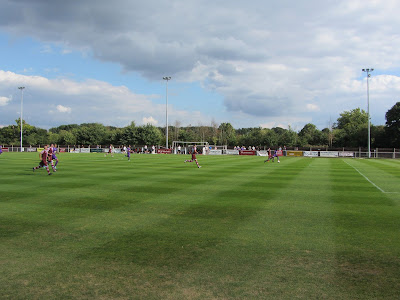 Opposite this the southern side is fairly sparse with uncovered standing with a small grass section behind. The two dugouts are then located next to the pitch. The western end is also mostly uncovered though there is a covered section directly behind the goal with 3 platforms of concrete terracing. The eastern end has a covered stand for the majority of its length - this is larger with 4 platforms of concrete terracing. 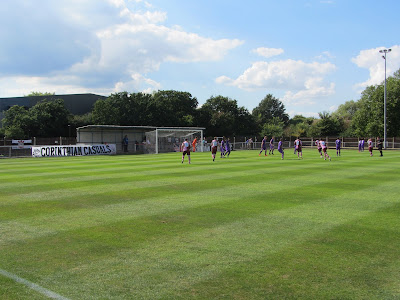 The opening period of the match was action packed with a number of goals in quick succesion. This was almost started in the 10th minute when a bad Corinthian goal was kicked straight to Taurean Roberts who beared down on goal only for the keeper to redeem himself and palm away. His relief was short lived though as a minute later he was picking the ball out of the net - once again Roberts had an effort saved but this time Danny Bassett was there waiting to tap in the rebound on the goalline. The hosts equalised in the 14th minute when a free-kick to the back post was steered towards goal by Terry Murray and the ball bobbled through keeper's legs and into bottom of the net. Having within a couple of minutes the hosts found themselves behind again as Jordan Wilson's cross from the right side of area took a deflection off Josh Gallagher and looped over his keeper for an own goal. The Casuals had been on back foot but after conceding the second they got a grip of the game and made more of a fight of things. They got back to level pegging in the 40th minute when a tangle of legs saw Josh Gallagher brought down and the referee point to the spot. Josh Uzan steeped up and sent keeper the wrong way to make it 2-2. That wasn't the end of the first half scoring though as Corinthian put through their own net again - this time when Danny Dudley's deflected Claudio Hoban's corner into the goal. Into the second half Tooting had two efforts cleared off the line in quick succession but just when it looked like they could pull clear they gave away their second penalty of the match when Bashiru Alimi handballed in box. This time the keeper went the right way but couldn't stop Josh Uzun notching up a brace. This changed the nature of the game and it was now the hosts that were on top - shortly after making it 3-3 Uzan was inches away from securing his hatrrick when he headed over from six yards out. The home side were reduced to ten men in the 74th minute when Jordan Clarke received a second yellow for impeding the goalkeeper's goal kick. However this didn't disrupt the flow as both sides went close in the final 20 minutes. This entertaining match could have gone either way but the two sides had to be content with a point apiece. 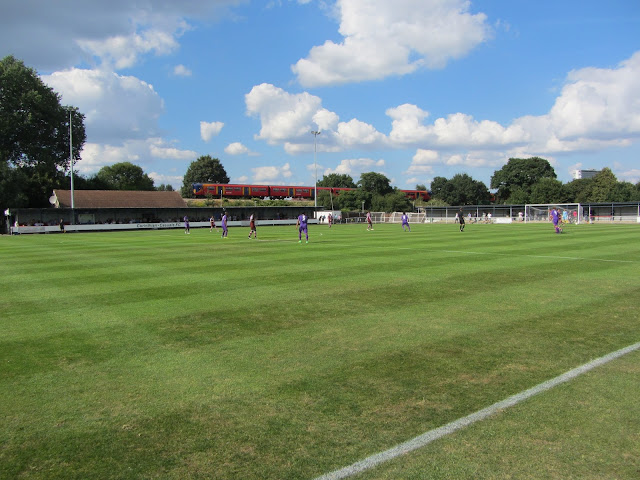