My twelfth new ground of 2018 was on Saturday 21st April at Sincil Bank in Lincoln, Lincolnshire. The match was Lincoln City vs. Colchester United in Football League Two.

Sincil Bank is in the east of Lincoln less than a mile south of the city centre. The site is on the edge of a large residential area close to the South Commons park. The ground gets its name as it is on the banks of the Sincil Dyke which runs along its western perimeter. It is bordered by a sports college to the south and a three-quarter size cage pitch to the east. To the north there is a car park and then the aforementioned housing. The venue is just over half a mile south of the city's railway station and has been the club's home since 1895. 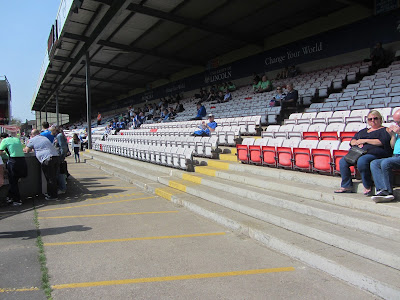 The eastern side has the St Andrews Stand sitting by the half-way line. Despite only being built in 1987 this stand looks a lot older than it is - the budget for the stand was slashed during construction which left it smaller than its wooden predecessor. The stand has a couple of supporting beams in front of the seating in order to hold up the roof. The interior holds the reception, club shop, ticket office and boardroom. The area to the north of the St Andrews Stand is unused though an additional family stand was added to the south of the St Andrews Stand in 1994. With it only able to hold a couple of hundred fans the stand looks tiny compared the rest of the ground. There are also club buildings in this area with the dressing rooms, treatment centre and a police control box. 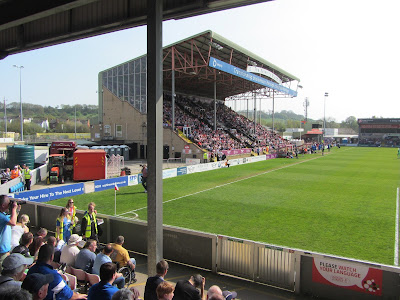 The West Stand runs the length of the field and dominates the stadium. The single-tier stand with its cantilever roof was built in 1995 to replace an old terrace and with a capacity of 5,700 it accounts for over half the stadium's total capacity. The southern end of the stand contains the noisiest home supporters.  The stand behind the southern goal was opened in 1992 replacing the Railway End terrace and is the smallest structure in the venue. With only half a dozen rows of seating the stand has 17 hospitality boxes which run the whole way along the back of the stand. There are a couple of supporting beams towards the middle which reside in front of the seating area. Behind the stand there is an outside bar area for home fans. The Stacey West Stand is behind the northern goal and was opened in 1990. 12 rows of seating were added on top of the original concrete terracing in 1999 completing the stadium's conversion to an all-seater venue. The stand has three supporting beams which can restrict views and is now assigned to away fans. However, if home support is sufficiently high the stand can be segregated with home supporters allocated the western half and away fans allocated the eastern half. This is the arrangement for my visit. 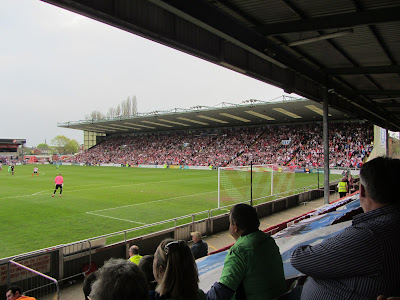 Colchester had to win to keep their faint play-off hopes alive and started the game the better of the two sides. Chances though were at a premium throughout the half with the closest either side went being on the half-hour mark when Matt Green's 25 yard effort was pushed wide by Colchester keeper Sam Walker. After a dull goalless first half the second half was a more entertaining affair. Lincoln took the lead from the penalty spot in the 55th minute after Ollie Palmer was felled when he was about to shoot. Elliott Whitehouse tucked the penalty into the bottom corner with Walker diving the wrong way. The lead was short-lived though as the U's equalised in the 60th minute. A fortunate deflection saw the ball break to Courtney Senior on the left-wing, he then played a nice 1-2 with Mikael Mandron as he ghosted into the area to slot home from six yards out. The away side should have taken the lead in the 73rd minute when Sammie Szmodics had plenty of time to pick his spot from the left side of the area - his effort was saved by Ryan Allsop with the rebound being blazed well over by Mikael Mandron when he had an open goal to aim for. The hosts nearly went back in front in the 82nd minute when a spectacular 25 yard shot across goal by Ollie Palmer hit the underside of the bar and bounced to safety. A minute after this the task got harder for Lincoln as they were reduced to ten men when Michael Bostwick pulled back Mikael Mandron as he raced in on goal. With both sides needing a win Lincoln and Colchester threw players forward as the game entered an end-to-end finish. There was a dramatic end in the 94th minute as Alex Woodyard's hanging cross from the left saw Colchester keeper Sam Walker come to claim the ball. He missed his punch with Luke Waterfall stealing in to head into the top corner to secure three points for Lincoln as they took a big step closer to booking their play-off place. 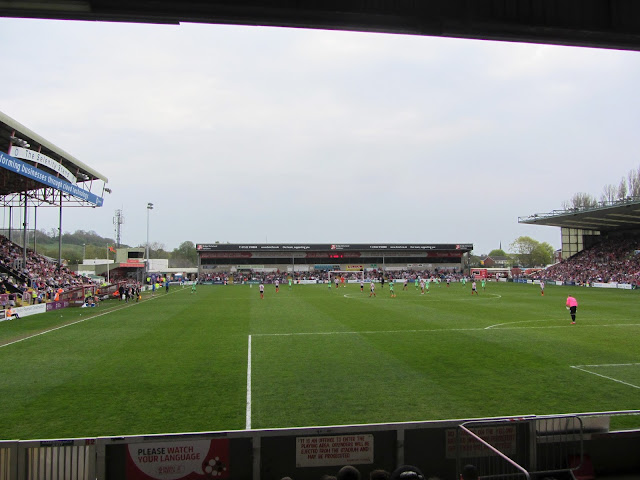