My thirty-first new ground of 2011 was on Wednesday 4th May at the Recreation Ground in Aldershot, Hampshire. The match was Badshot Lea vs. Fleet Town in the Aldershot Senior Cup Final.

The Recreation Ground is around half a mile from Aldershot railway station. The ground has been home to League Two side Aldershot Town since 1927 although for the night it was hosting the Aldershot Senior Cup Final. 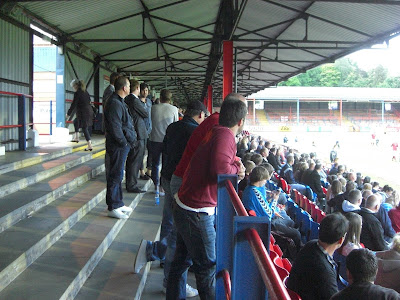 Despite being a league ground, the stadium looks very dated and in need of a lot of work. It consists of an odd mix of seating and terraces and when I visited it only had three sides to it with the High Street End empty. In March 2013 a small 250-seat stand was built at this end of the ground. With this end of the ground backing onto a railway line, the club is very limited by space in this area. 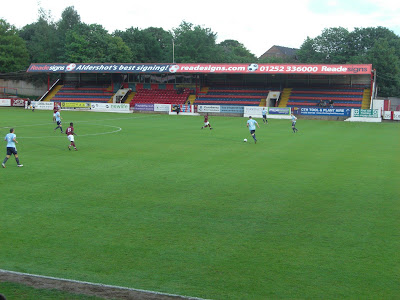 The South Stand is the one of two all-seater stands in the stadium but is quite small, housing just under 900 seats. This is flanked by terraced standing sections on either side of it. Behind the goal on the east side of the ground is The East Bank. This is the largest stand in the ground with a capacity of around 4,000. It is all standing with the antiquated terraces making it look like a section out of a different era in football. The North Stand is where I took my place for the game and it is a 1,500 capacity stand with a mixture of modern seating towards the front and older terracing towards the rear. It must be said that the seating section was pretty decent with plenty of legroom. 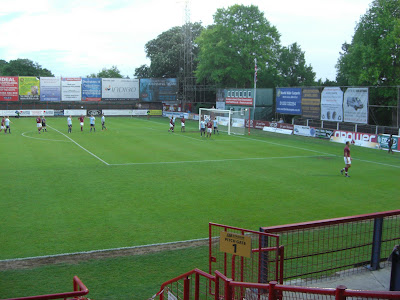 The ground was playing host to the final of the Aldershot Senior Cup (or to give it its full name the Aldershot Divisional Football Association Saturday Senior Invitation Challenge Cup) which it does each year. The 2010/11 Final was between Combined Counties League Premier Division side Badshot Lea and Ryman Isthmian League Division One South side Fleet Town. With Badshot Lea one division below Fleet Town, they went into the game as underdogs but a spirited opening half-hour saw them come within inches of scoring on two occasions. Despite this it was Fleet Town who made the breakthrough, heading in a corner to lead 1-0 after an entertaining first 45 minutes. The second half was dull by comparison and as I left with a few minutes to go in order to catch my train home it appeared Fleet Town had the cup in the bag. However, as it transpired, Badshot Lea forced home a 92nd minute equaliser to push the game into extra-time. In what sounded like an enthralling extra 30 minutes, Badshot Lea twice led with Fleet Town pulling back on both occasions so the game ended 3-3. Badshot Lea then won the penalty shoot-out 4-3 to win the cup. 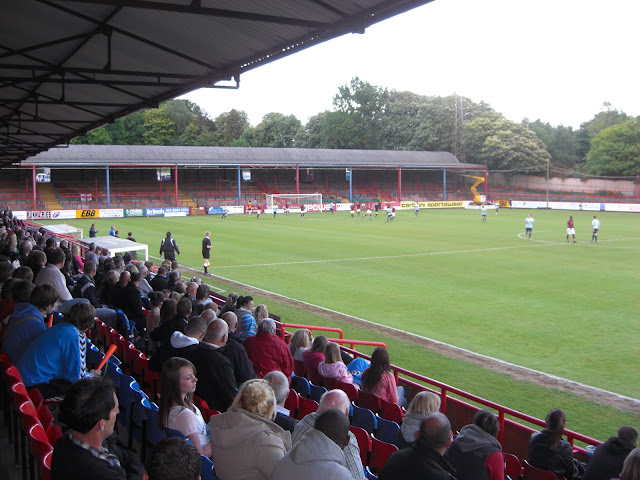