Date: 12th September 2020
Ground: Parkside Road
Location: Kendal, Cumbria
My seventh new ground of 2020 was on Saturday 12th September at Parkside Road in Kendal, Cumbria. The game was Kendal Town vs. Bishop Auckland in the F.A. Cup Preliminary Qualifying Round.
Parkside Road is located in the south of the town not far from Kendal Castle. Netherfield Cricket Club is located due north on the other side of the road and there are additional football pitches to the south of the ground. Other than that there is an industrial estate to the west and housing to the east. The venue is just over a mile south of Kendal railway station and has been the club's home since they were formed in 1919. 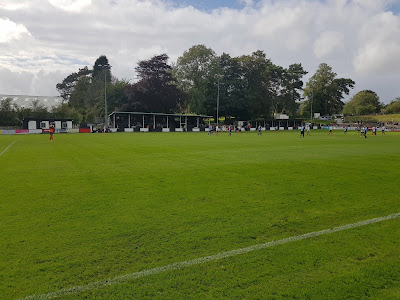 The entrance to the ground is at the northern end with the car park also in this area. Upon entrance to to the left is the main stand. This seven level concrete terrace is split into two distinct sections with the eastern half having a spacious classic old style clubhouse and bar at the back of the stand which looks out over the pitch. Directly in front of this are 140 seats which are spread over the upper three levels before tapering off to a single row by the middle at which point the western half of the stand becomes terracing only. At the bottom of the stand is a flat concrete section for people to watch from pitchside. 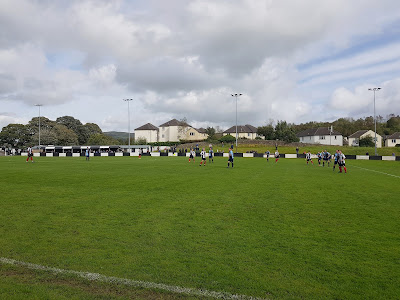 The opposite end of the ground is the most basic consisting only of uncovered flat concrete though it is of decent size for fans to use. The eastern side has a two-level covered concrete terrace in the north-east corner though this was cordoned off during my visit. Beyond this is a seven level uncovered concrete terrace with a grass bank behind it which is used by spectators as well. The western side has a covered stand towards the northern end which has 84 seats across the front two rows and a flat concrete section at the back with a single bench section part of the way along. One of the two dugouts is located next to this and by the halfway line is a wooden stand consisting of six rows of benching. The middle of this stand leads back to the dressing rooms within. Towards the eastern end is the second dugout, a medical room building and a small club shop. 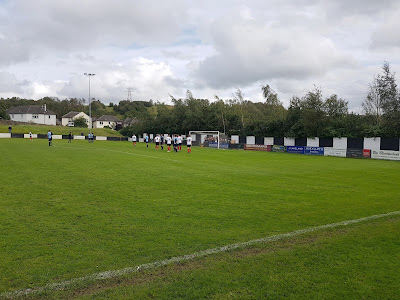 The match was an F.A. Cup Preliminary Qualifying Round tie between Northern Premier League Division One North West side Kendal Town and Northern League Division One side Bishop Auckland. The visitors had the ball in the net with less than 5 minutes on the clock when a free-kick to the back post was headed in but the goal was ruled out for offside. This didn't put off Bishop Auckland and in the 20th minute Kendal keeper Luke Camacho had to get down well to palm away Craig Hutchinson's shot from the left side of the area. For their part Kendal's first chance arrived after 27 minutes as Robert Liam Lightfoot's good attacking run saw him jink past a couple of defenders and then shoot strongly at Nicholas Liversedge who tipped it wide. The away side had a second goal ruled out in the 39th minute when an attacker fouled the keeper while heading the ball in from a cross. Bishop Auckland might have felt it wasn't going to be their day but just a minute later their luck turned. A ball up field saw an attacker in on goal and Luke Camacho mistimed his attempt to clear and absolutely clobbered the visiting player. Craig Hutchinson stroked the resulting penalty low to Camacho's left and despite getting a touch on it the ball ended in the back of the net. The 9th tier side were well worth their first half lead but any hopes Kendal had of a second half revival were dashed with an absolutely inept performance that saw Bishop Auckland run riot. The second goal came in the 51st minute and it was Hutchinson on the scoresheet again as he nodded home when a corner was floated over the keeper. In the 62nd minute the away side added a third as a ball over the top found Luke Hogan who coolly slotted the ball home from ten yards. The one-way traffic continued which a series of chances with a quarter of the game to go - in the 74th minute Luke Hogan poked the ball left to Craig Hutchinson whose deflected shot was heading over the line until a Kendal defender managed to clear. 60 seconds after this Hutchinson had another chance to complete his hatrick when he broke free of the defence but when in on goal the ball bobbled just as he went to pull the trigger and he sliced wildly over the bar. The home side were still all at sea and barely a minute after this the third key chance in as many minutes resulted in a goal. It was a near carbon copy of the third goal as a defence splitting ball saw Luke Hogan clean through and he had all the time in the world to stroke past Camacho as the keeper came to meet him from 15 yards. It had been a super attacking display by Bishop Auckland but the Kendal defence was woeful in the extreme as they took a thrashing at home from a team from a lower division. Their misery was rounded off in the final minute of the 90 when Luke Hogan picked up the ball down the left wing and squared for substitute Regan Nixon to tap into the empty net on the line. A 5-0 away win did not seem a likely scenario at kick-off given the two positions in the football pyramid but Bishop Auckland well deserved to continue further in the competition. 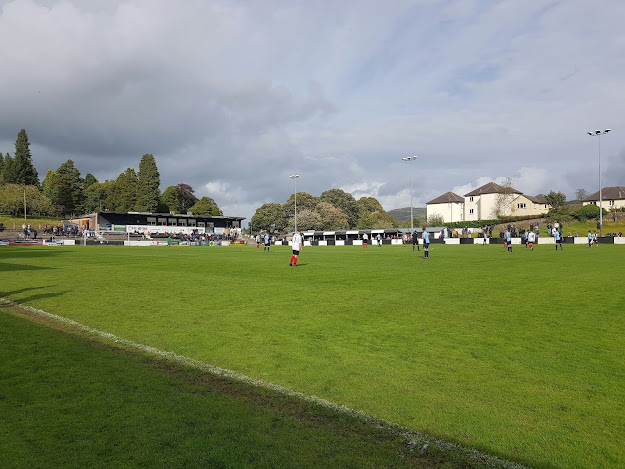