My eighteenth new ground of 2019 was on Tuesday 9th April at Forthbank Stadium in Stirling, Scotland. The match was Stirling University vs. The Spartans in the Scottish Lowland League.

Forthbank Stadium is part of a sports complex on the eastern edge of Stirling. Its neighbours include The Peak leisure centre to the west and Stirling County Cricket Club to the north-east. There are also additional football and hockey pitches and half a dozen cage mini pitches to the north-west corner. The southern and eastern sides are given over to a large amount of car parking spaces. A mile east of Stirling railway station and the town centre, Forthbank Stadium was opened in 1993 as the new home for Stirling Albion FC with the club leaving their outdated Annfield ground after a 48 year stay. As well as primarily being the home stadium for Stirling Albion it is also shared by Stirling University FC who were the team in action on this occasion. 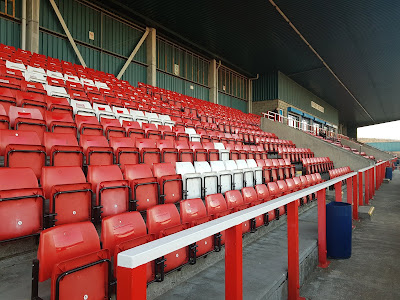 The West Stand is the largest one at the ground running around three-quarters of this side of the venue. The all-seater structure has a capacity of around 1,500 and with attendances rarely hitting four figures is usually the only one open for home supporters. This stand has a few hospitality boxes along the back row and the interior includes the reception, club shop and a gym. At the front of the stand are the two dugouts and a space for a flat platform for disabled fans to view the game from. 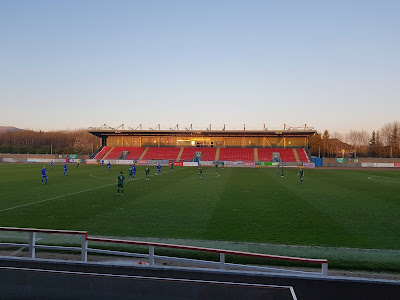 The East Stand is a little smaller taking up around two-thirds of the eastern flank. It is otherwise similar in appearance to the West Stand and has around 1,000 seats. The stand is given over to away supporters and has a police control room and press room at the back of it. The northern and southern ends have uncovered concrete terraces assigned two-thirds of the space behind the two goals. Near identical in nature they both have capacities of 650 and are only used for rare occasions when the crowd size requires them. With none of the stands running the full length of their respective sides this results in very large gaps between all four with wide expanses of dirt separating them. 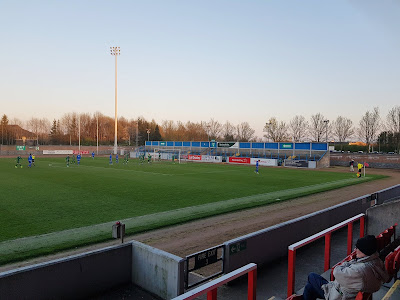 With the end of the season fast approaching there was only pride at stake as 13th place side Stirling University took on 5th placed side The Spartans. An even opening to the game saw both sides creating chances - in the 5th minute a spinning 20 yard effort by Spartans' Blair Atkinson required home keeper Kevin Walker to tip the ball over the bar. Meanwhile at the other end Stirling wanted a penalty in the 9th minute when Blair Lyons raced into the area and was unceremoniously bundled over. The referee waved away the protests but the hosts were in a better mood when they opened the scoring in the 25th minute. An excellent cross was whipped in from the left by Callum Downie for Craig Brown to head down and past the keeper from six yards out. In the 32nd minute Stirling were a whisker away from a second when Euan Baird took a very good first-time shot on the left of goal only to see it come back off the post. Spartans' came back though and after Blair Atkinson was denied by Kevin Walker in the 36th minute they managed to equalise just one minute later. It came from a speculative 25 yard shot from Jamie Dishington which found the bottom corner of the net. If the away side thought they would be going into half-time on level pegging that was shattered a couple of minutes before the break when Dominic Slattery's great 25 yard free-kick found the roof of the net to restore Stirling's lead. The fourth goal of the game arrived in the 63rd minute as Spartans levelled things up - David Greenhill picked out Jamie Dishington on the right and he danced past a couple of defenders and poked a shot towards goal which hit the Kevin Walker before squirming over the line. Just three minutes later Stirling went back ahead and again it came from a Dominic Slattery free-kick. Slattery's shot initially seemed harmless but Spartans goalie Blair Carswell misjudged the bounce and it awkwardly went over him into the top corner. With ten minutes to go Stirling went two goals to the good for the first time - a corner to the back post fell to Matt Burrows who curled a shot into the opposite corner of the net. Spartans attempt to get something out of the game took another blow two minutes later when Michael Herd's late tackle of Blair Lyons saw him pick up a second booking of the game. Spartans did manage to get the ball in the net in the 89th minute but with it being ruled out for offside that was it for their evening's efforts as Stirling ran out winners. 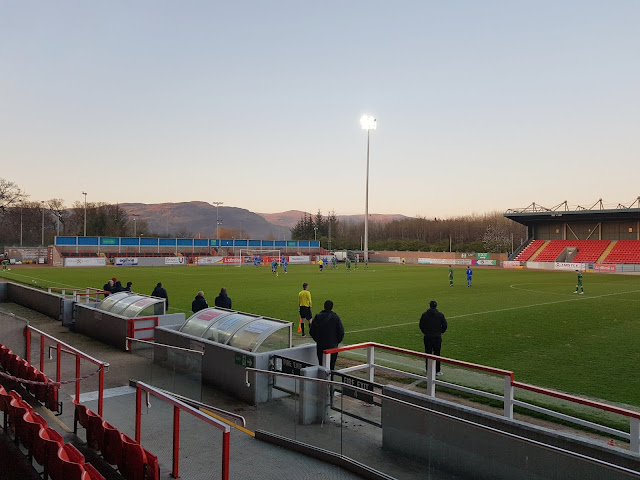