My thirty-ninth new ground of 2011 was on Tuesday 26th July at Grosvenor Vale in Ruislip, London. The match was Wealdstone vs. Wycombe Wanderers in a friendly game.

Grosvenor Vale is half a mile walk from Ruislip Manor tube station on the Metropolitan Line. It has been home to Wealdstone since 2008 when the original occupants Ruislip Manor FC folded, leaving an empty stadium. Wealdstone who had been without a permanent home for some time moved in. 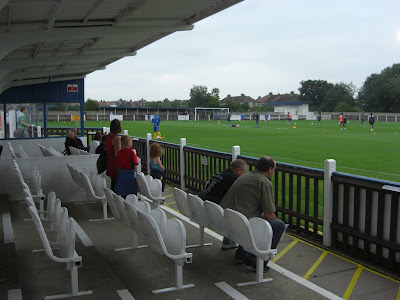 The ground has had much work done to bring it up to scratch in recent years but work is still ongoing to improve it further. There are two seated areas, one on the east side of the pitch just to the right of the dugouts. This stand split in two and can hold just under 100 fans. The other seated area is a larger stand on the west side of the pitch capable of holding just over 200 fans. 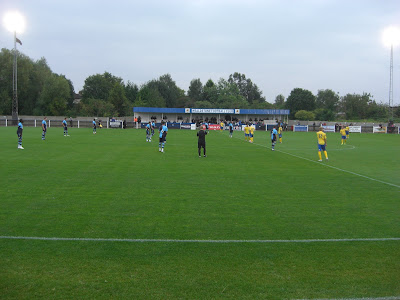 The rest of the ground consists of standing areas with three covered sections (one on the east side near the entrance, one behind the goal at the north end and one behind the goal at the south end) which give shelter to a further 568 people. Facilities are good and there is an excellent bar outside the ground though within the confines of the venue for fans to go to. 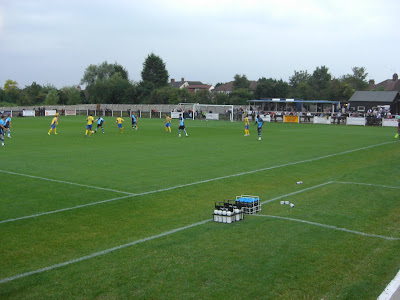 The game was a pre-season friendly between and Ryman Isthmian League Premier Division side Wealdstone and League One side Wycombe Wanderers. The match started off in a cagey fashion until the visitors opened the scoring on the quarter-hour mark as they raced clear of the Wealdstone defence. The home side responded in a spirited manner and pushed their higher-division opposite hard, creating several opportunities which finally paid off when they steered the ball home on the stroke of half-time. In the second period it was Wealdstone who looked more likely to win it, hitting the inside of the post and spurning further good chances. In the end though neither side could get the ball in the back of the net and it finished at 1-1. 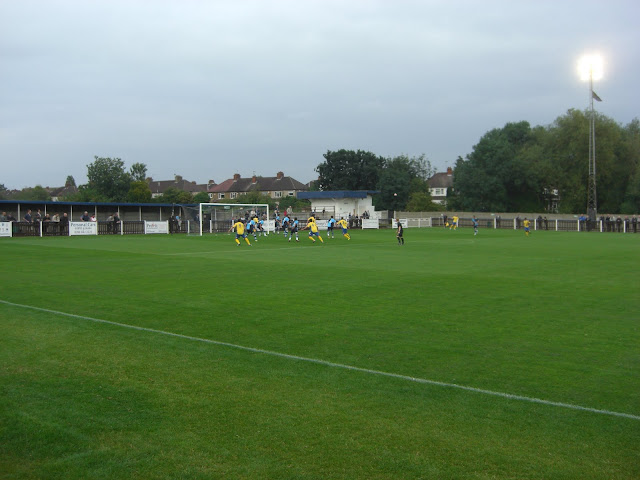